I have been having issues when using FaceTime on all my Apple devices (iPhones, iPad & MacBook Pro).

Basically my devices always pause at some point during the video chat and it either says Reconnecting or Poor Connection on the devices.  I find this a bit weird when we have a 76 Meg down.  It happens when I sit right beside the Router too so I know it's not because of a poor WiFi signal between my device and the Router.  When I just use 4G the problem instantly goes away.  However this is not an ideal fix as I don't want to use up all my mobile data.

I have managed to get the relevant Port list from Apple and have set up a new Game / Application in the Port Forwarding section of the Router Control Panel and designated it to one of my devices.  My questions are ...

a)  I only seem to be able to designate the port forwarding rules to one device and not several (or just a router wide rule for any devices using FaceTime).  Is there any way I can trick the Router into letting me set up multiple rules for each device which include the exact same port forwarding rules without it telling me that these rules are already in place with another Game / Application?

b)  Is this a common problem with Plusnet?  I did set up the rule for my iPhone and the connection still played at being a silly billy.

I don't know what else to do.  The fact that it only happens with FaceTime through the Router but on every device had been leaving me rather frustrated.  It never seemed to happen with our previous Netgear Router when we just had the basic ADSL service at 1.5 Meg!!

Hope you've managed to read to the end and are able to suggest something that might help.

P.P.S  Here's the link to Apple's suggested Router and Network settings for all their devices - https://support.apple.com/en-gb/HT202068

It's a bit of a long shot, but try separating 2.4 and 5 GHz wifi by renaming the 5 GHz wireless SSID 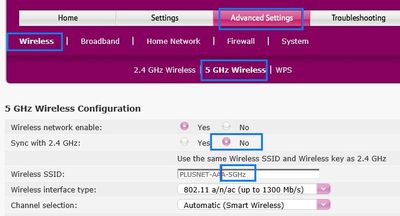 Many thanks for the reply and suggestion.

I've done what you've said and will try it a few times and let you know how it goes.  I also went through all of my connected devices again and connected the older machines to the 2.4 network and my newer devices to the 5 network.  Don't know if that will make any difference or not but I'll try it and see.

The change to the router setup as suggested doesn’t seem to have made any difference to my iPhone SE. All other devices working fine. I can only assume it’s my iPhone as it has been funny with FaceTime on other routers too since my original post but still, it seems fine on 4G.

I’ve Reset Network Settings on the phone but it still didn’t make a difference. Other than doing a complete factory reset / wipe / reinstall of my phone (which I’m not prepared to do at the moment) I don’t think I have many other options. I can easily use other devices. It’s just a minor inconvenience really.

One more question though - on the Router front we’ve always used our own Netgear routers which we’ve always found to be very good. This is the first time we’ve used a stock Plusnet Router. Do it think there would be any advantage or benefit to going down that road? Must admit the Plusnet Hub One Router that we have at the moment does seem to be ok. Can’t really fault it so far but I have been toying with the idea of going out and getting a new Netgear Router, although which model to get these days has me a little stumped as there are so many options. I wouldn’t want to go out and accidentally buy one that is lower species than the Plusnet one.