We'll proudly mess up your Christmas!

We'll proudly mess up your Christmas!

"I'd like you to take over my TalkTalk Line please, the number is xxxxx xxxxxx" was all I said and now we have no TV for Christmas!

Two lines into our house, 1 for TV, home broadband and the other for business (fibre via TalkTalk) - I described clearly (several times) that I wanted the TalkTalk number used for Plusnet broadband service and all seemed to be heading in the right direction.

Alas, the BT line was closed down and the Plusnet service applied incorrectly to that line. WHY? I said so many times TalkTalk, TALKTALK, TALKTALK! Unbelievable!

After a brief chat (well 25 mins, 18 mins on hold) I was told that I had to contact BT to ask for them to replace a SLAMMED line (it has a name, so obviously a common problem!) only to be told that it takes 10/15 working days to install!

Thanks Plusnet, you prooudly srewed that one up!

Oh and the other thing, Plusnet said there is no compenstion unless I decide to stay with them, to which I proudly presented a set of digits!

Has it occured to you that on this occasion in might have been Openreach, not Plusnet that have screwed up? If it's Plusnet's fault then BT should have contacted you to advise that they had received notification that the line was being transferred to Plusnet, this is something that they are obliged to do to avoid slamming incidents such as this.


This topic has been moved from Broadband to My Orders

@Baldrick1, Hmm, I'm not sure that it can be anything but Plusnet's error. The OP had no contact with BT, or Openreach, only Plusnet. If Plusnet choose to delegate the [-Censored-]-up to a third party (whether that is Openreach or anyone else) that is up to them, but surely the responsibility still rests with Plusnet?

Plesnet do not delegate the responsibility for providing the service to Openreach. They act as agents and resell a product supplied by Openreach. I agree that the contractual responsibility lies with Plusnet and it's their responsibility to get Openreach to sort it out but that doesn't necessarily mean that Plusnet are the cause of the error and the subsequent hassle.

@Baldrick1, I think you are wrong - Plusnet are not acting as agents. They are selling a service, which they may well buy from a third party, but they are not acting as an agent for the customer. The contractual responsibility for the service Plusnet sell rests entirely with Plusnet - the customer has no contractual relationship at all with any of Plusnet's suppliers.

I sincerely apologise for the inconvenience caused by us taking over the incorrect line in your property.

I'm aware that you have recently spoken to other advisors regarding this. However, I have updated your account further in response to this post.

You can view my response here

If you have any questions please do not hesitate to get back to me.

Thank you for your support and I agree, I am dealing directly with Plusnet as a customer of theirs not any other third party.

If Plusnets' procedures and protocols were followed correctly this would not have happened. This is purely an error in communication between the two parties involved in providing the service.

The issue that pains me is the fact that Plusnet are unwilling to take the initiative to fix the problem with BT, Openreach, AN Other and offer a small something by way of a good will gesture ... rather than Oh well, call BT, I am sure they can fix your SLAMMED line and perhaps ask for an USR (Urgent Service Repair), that might speed it up!

Alas, I work for a living and do not have the time required to chase this option.

BT services apparently will be resumed 21st December ... Oh and BT offer 4G guaranteed dongle connectivity at no further cost, so with a bit of luck my business will be back online in a day or so.

Au revoir Plustnet ... should have checked reviews rather than being lazy listening to adverts, as detailed below ... 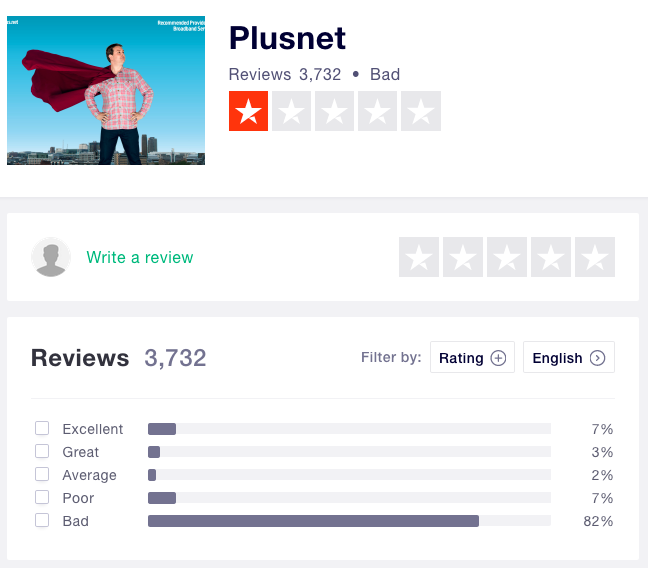