I switched mobile provider in December and today received a bill from my previous provider PlusNet. After inquiries it turns out a second account was opened with my details two months after I opened the PlusNet account in 2016, and I have been charged at least £6 a month by direct debit for it ever since. There was only ever one direct debit set up for Plusnet, but both payments were taken from it! After going through my emails it does appear I have been receiving two almost identical emails every month, only the number is different - I thought the other email was a reminder, why would I check the bills were for two different numbers? There was never any mention of this second number when I log into my Plusnet account on the website, so I have been completely unaware of it for four years.

Hi @Pphone1, thanks for getting in touch.

I am really sorry to hear about this, so that we can take a look into this further for you can you please send over a private message with the following details:

- The mobile number in question (as on the email) 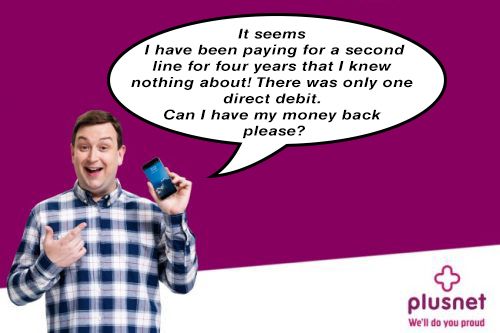 Plusnet mobile will not refund four years line rental for a second number I knew nothing about. Customer services said it was not fraud, discounting every other reason for the error, and tried to fob me off. This is going to be a long struggle. I'm a political campaign manager so I'm documenting this saga the only way I know how, through the medium of internet marketing. This is one of a series of memes I am creating. Hope you like it.

I would guess that this is complicated by the fact that 4 yrs ago , Plusnet mobile didnt exist!

@Pphone1  did you have dealings with Life mobile ?

Hi @Pphone1, I have explained the reasoning for the outcome over our PM conversation.