Hi, hoping support visit here every so often since the phone lines are closed, chat is unavailable and you apparently can not email or raise a ticket.

My Feb bill has arrived and apart from being a mess (3 entries each for broadband, line rental and discounts) my bill looks to have included a line rental charge bringing the total to £34.93 (typical month is around £20). I paid for a year of line rental up front on 18/10/20 so I should not be paying for this again until October.

Can someone look into this and let me know what is going on?

Welcome to the forums, @chris1231 . If you post a screenshot of the breakdown, maybe a fellow customer could try and decipher it. The chance of the Help Team appearing on here is remote at the moment.

Hi, one break down below. I did renew in Jan so maybe that has something to do with the mess, although it does not explain the apparent over charge? 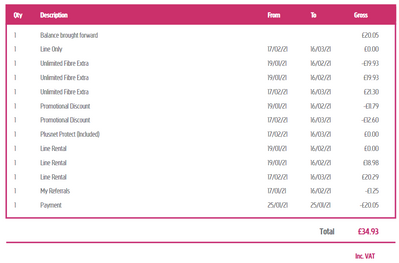 @chris1231 That adds up correctly, but as usual with Plusnet invoices, it's as clear as mud. 😉

To try and make sense of it, can you post your NEW agreed contract, making sure you either redact or obscure any personal information? 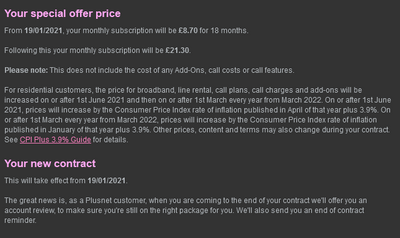 However is looks like they are charging for multiple months of line rental?

Looks like they've fouled up massively, @chris1231 . Do you mind if I have another look tomorrow morning - brain is a bit fogged tonight?

No problem, just glad I'm not the only one confused by it.

Chris, I think the Broadband element/referral discount elements are correct - I'm sure my contract change back in March 2019 caused an equally confusing invoice, BUT, as you say they are for some reason trying to charge you line rental, when you have paid upfront - not unheard of, the accounting software appears to have been written by a dyslexic monkey.

My suggestion would be to ring Accounts as early as possible in the morning and ask them what they think they are playing at - providing you get an agent with brains it should be easy to sort.

As a point of interest, I had a bit of a foul-up back in 2019 when I re-contracted, but two phone-calls later it was all sorted.

Thanks @jab1 I'll give it a go. Like you say it seems unlikely customer support will be turning up on their forums any time soon.

I'll let you know how it goes.

Out of interest how did you get on with this?

For anyone that is interested so far I have.

1. Called them and got a refund. I must have been asleep when I did this call as I realised later the refund only covered one of the line rental items, so I want back to them on the support ticket they had raised

2. After a few days and no response, I chased in the support ticket.

3. After more days and no response I called again and got a refund on a Wednesday morning I think it was.

4. Wednesday afternoon I got a response back on the support ticket I had been chasing and got a refund.

5. I think went back on the support ticket and suggested they had better check everything and make sure they had everything right since I had spoken to them on Wednesday morning and I did not fancy calling them yet again.

6. After a few days the ticket was closed because "closing this ticket as I can see that everything is up and running and the services are now live"

I'll be checking what hits my bank account and how the next bill turns out. I "think" is is solved, buts its messy and the last response from plusnet about services not being live had nothing to do with the problem reported.