Can anyone explain this please? I am NOT going to pay this...2 charges for Fibre Extra, 2 charges for Line Rental and both different amounts. Is it the 1st of April already? 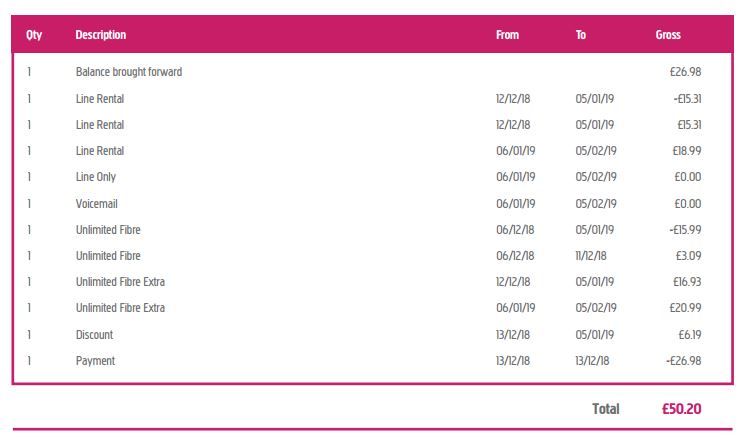 
This topic has been moved from Fibre to My Account / Billing

I'm sorry for any confusion that may have been caused regarding your bill.

I have looked into this and raised a ticket on your account with further information. You can view this here

Should you have any further queries, please feel free to get in touch.

I have replied to your ticket. Your reply doesn't explain why my bill is nearly double what was stated over the phone, You (PN) have now put me overdrawn on the account that the bill is paid from and I'm now going to be charged for it. I was told over the phone my bill would be around £28 to £29...then is billed at £50. If this carries on I will have no option or hesitation in taking this matter further.

A float tip is pleasing in its appearance and even more pleasing in its disappearance.
Growing old is inevitable...But growing up is optional.
Message 4 of 7
(752 Views)
0 Thanks
Highlighted

I have responded to your query via the open ticket on your account. This will explain what the charges are. You can check the response here

Please get in touch if you have any further questions.

Thank you for sorting this out and your kind reply to the ticket.

A float tip is pleasing in its appearance and even more pleasing in its disappearance.
Growing old is inevitable...But growing up is optional.
Message 6 of 7
(726 Views)
0 Thanks
Highlighted

You're welcome! - Always here to help

Don't hesitate to get in touch if you have any queries in the future.