On 21st March, somebody started making phone calls from my number, I don't have a house phone connected so Plusnet said open reach would check for a wire cross. Apparently there is no wire cross and I owe them £60 for the calls I haven't made..

This mystery person making phone calls was ringing 123 every few hours cost 50p everytime, so I've been with plusnet since August and yet they don't find it weird how phone calls went from 21st march till now. So I rang up again today cause I'm not happy how nobody cares I haven't made these calls and I was rude to this lady which I regret now and she said she would forward my case to somebody who would ring back... They didn't

@nickjeffery Welcome to the forum. 😊

You've been the victim of a longstanding problem - see here .

The standard answer from the call centre is unfortunately "Computer says you must pay".

A Plusnet staffer will be along at some stage to sort this, but obviously in the present crisis it may be a day or two, or three longer than normal. 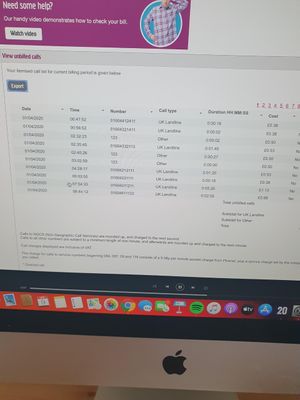 thanks for your reply but as you can see its not just at normal times an engineer would visit, its been like that for a week. which i said this to plusnet and then i was told it just looks like i've made these calls.


...its not just at normal times...    ...its been like that for a week. which i said this to plusnet and then i was told it just looks like i've made these calls.

Then they didn't take the trouble to look carefully at the numbers.

Now, you'll be aware that you can dial an own area number without using the 01604 area code, but that the full prefix and number will appear on the bill.

Looking at all those calls, you'll see that by far the most commonly occurring digit is '1' (twenty times), and the highest digit, occurring only once, is '5'. Nothing between '6' and '0'.

I'll wager next month's pension that it's what we in the trade called a "tapping line", where digits are dialled because the line is experiencing intermittent short circuits. It was a lot more common in the days of uninsulated overhead open wires being blown by the wind.

I just hope that you don't have to go through the stress caused to another customer due to Plusnet's obduracy in accepting the evidence. See here .

Can you assist please @Gandalf  ?

I had this exact same problem a few years agom with the phone line "tapping" ot random numbers due to a line fault . It was   not  a crossed line but a short circuit in the line as no-one in the house was making calls at the time. This first came to our attention when people started to ring us to ask why we had called them but not spoken,  accusing us of prank calls. We could not understand why this might have happened Then we got  a visit from the police, as the tapping had also managed to call 999 dozens of times in the middle of the nignt ! They acused our children, who were then quite small, of playing with the phone. Eventually after talking to BT, the provider at the time, it was found to be a damaged cable rubbing against a tree and tapping out random numbers when the wind was blowing. Very disconcerting at the time, but the engineers who fixed the fault said it/ was is very common.There can be other causes inside the house, which in fact are more common than external cabling, such as a faulty or old extention cable in the house that perhaps runs under a carpet or floor and is disturbed whenever someone walks past. Very common aparently if an extention runs up the staircase .

Yes it was fully resolved thanks finally after ringing the 4th person said there was a fault with my line and I would be refunded the full amount.
Message 7 of 8
(699 Views)
1 Thank
1 user liked/thanked this post: 198kHz.

Good news - thanks for update.