Cancellation will cause overdraft fees

Cancellation will cause overdraft fees

So, early August, my contract had almost 2 months to run then would end.  Checked my account.  Plusnet would do me special deal of over £42 if I renewed. What?  50% more than currently paying.

Googled "plusnet broadband", get taken to a page with various deals, one of which was better than mine, and would cost less than £25.

So, can't do anything online from my account page (why?!) so phone.  Advised I can get more special deal than £42 but they can't match deal of new customers.

I say there was nothing on the page I landed on about their deals being only for new customers.

Voice at other end of phone says only for new customers.  I argue there's nothing on page about that.  Voice says because I'm an existing customer (I've been with them for over 15 years), there will be a *special* deal shown when I sign in.  I tell voice that the deal is almost 50% more than I currently pay, and what I pay is dearer than what they're advertising online.

So much for doing me proud.  I cancelled my account, which will end before Oct.

Phoned up.  Charges confirmed.  But, i'm advised, they will be refunded.  What?

They've known almost 2 months about the cancellation.  A company this size can't work out what I owe, and only charge that.

Well, because I cancelled, and wasn't expecting further charges past end date of contract, I've paid other outstanding bills, which will leave me few pennies before my next expected Universal Credit payment on 20th Oct.

Because Plusnet will be taking money out of my account that I don't owe, and wasn't expecting, this will put me into an overdraft, which comes with a minimum of £19.40 fee from my bank.

Nothing on the plusnet HELP pages that would help give me an answer to that.

What is it with big companies (including plusnet), that if you want anything from them that costs money, you can get it almost with just a single click, but if you have any problems, then good luck getting an answer.  You have to spend ages wandering round their site, hoping you find an answer, but even the Help pages only give you useless advice or, worse yet, tell you to look in their Help section.

"Do me Proud" must be a Yorkshire saying that means the total opposite of what that saying actually means.  Like calling a bald man 'Curly'.  Oh, how people from Yorkshire must laugh when they see that saying being used.


This topic has been moved from Chat to My Account / Billing

Customer / Moderator
If it helped click the thumb
If it fixed it click 'This fixed my problem'
Message 2 of 27
(1,254 Views)
0 Thanks

Thanks a lot for reaching out and I'm really sorry to hear that you're not happy with the new deals being offered. I'm not sure where you've looked to find new deals, though on our website, we do state that the deals being offered are for new customers. I've popped a screenshot below.

In regards to your bill, we'll always bill you in advance for 30 days of service, this is because in theory, the cancellation can be cancelled. Once the account is closed though, you'll soon receive a final bill with a pro rata refund for services that you didn't use.

There's nothing that can be done at the moment though to be honest in regards to latest bill / payment.

Screenshot of page I landed on when I typed "plusnet broadband" into google ... 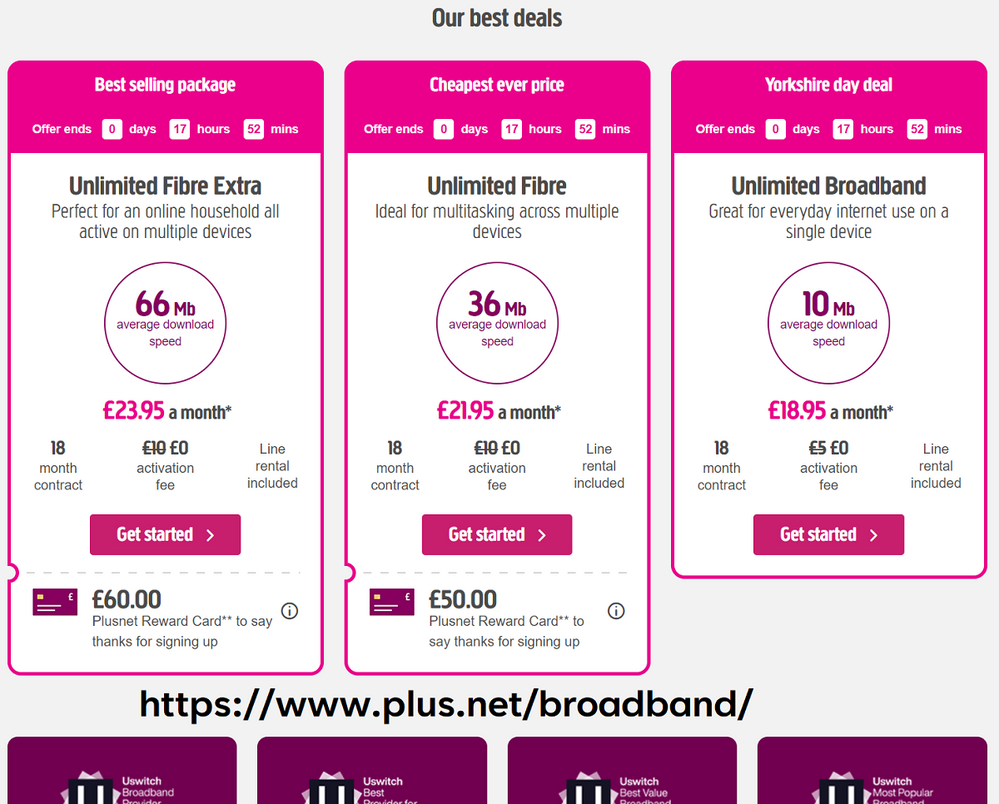 This screenshot was from 11th August.  (The https: part was added by me to remind me what page it was).

Note the difference between your image to mine.  Nowhere on the panels I took copy of, nor on the page, does it say anything about being a new customer.

My contract was coming to an end, so I took this to be what I could get if I renewed for a further 18 months.

Thanks for sending this over @Sinjanu_LFS. If you look into the further info (it'll be the little (i) at the bottom) it's likely you'll see they do confirm that they're new customer deals. Whilst I can definitely see where you're coming from, at the end of the day we're a business looking to continue to grow so offering new customers a reason to join us is why you'll see better new customer deals than existing customer deals.

You can always give our Customer Options team a call on 0800 013 2632 and have a chat with them about existing deals and give them a heads up that you've seen a new customer deal price and ask if you can match it. The worst that can happen is they can't match it and best case scenario they can.

So, just had an idea to see what happens when I repeat what I did before, and type in "plusnet broadband".

This is results page ... 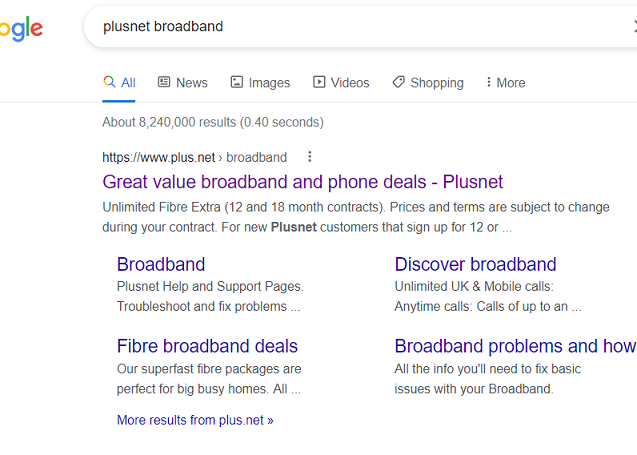 And when I clicked the link (the one in purple, as I went back in my browser after looking at page it took me to), I see ... 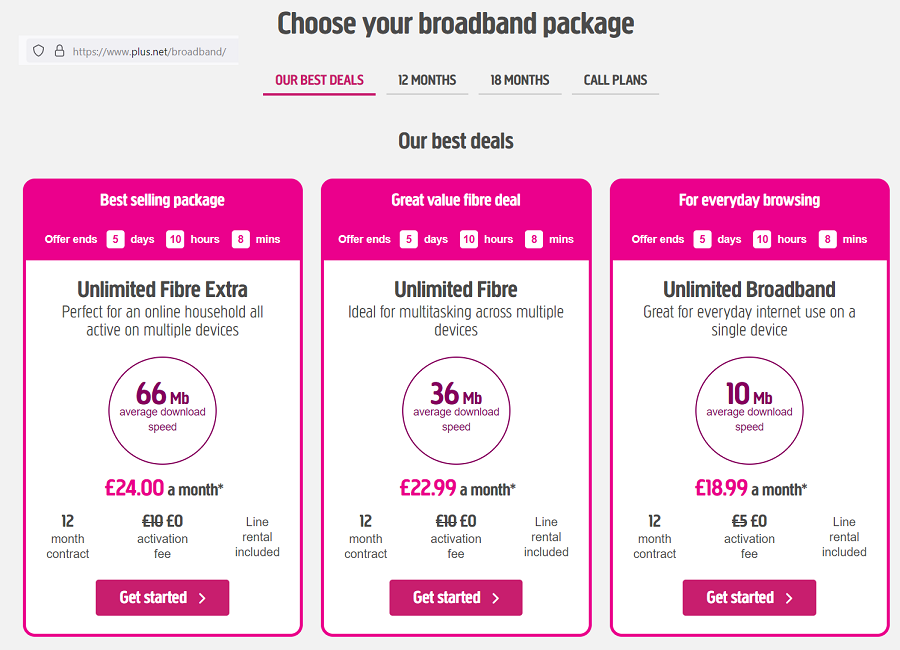 And once again, nothing about 'new customers'.

No idea where your image comes from, but it bares no relation to what I see.

"You can always give our Customer Options team a call on 0800 013 2632 and have a chat with them about existing deals and give them a heads up that you've seen a new customer deal price and ask if you can match it. The worst that can happen is they can't match it and best case scenario they can"

And I repeat, your online page doesn't say 'new customer'.

Anyway, I did phone your team.  They repeatedly said the online page said 'for new customers', and I gave them the address of the page I visited, which clearly, had nothing about old, new or existing customers.

So instead of doing me proud, I got the "worst" scenario.

I expect, in about 10 years from now, plusnet will catch up with car insurance companies, in that instead of stiffing existing customers with more expensive policies for renewing, they might give everyone the same deal.

That's assuming existing plusnet customers have had enough of subsidising new customers, and have swapped over to someone else who provides fibre in their area.

Not that it does [-Censored-] all about going into overdraft, especially as I've repeatedly confirmed I want my contract to end on the contractual date, and there is no chance of me cancelling the cancellation.

ISTM you're only seeing what you want to see.

Can you see the word which I've added the upward-pointing arrow under?

I can't do fancy arrows like @RobPN  ,but this bit also seems to have escaped your attention:

And I've just done same thing again, and when I land on

there is nothing about 'new'.

And just in case my browser cache wasn't updating, I did CTRL F5, and get exactly same results.

I would have taken a screenshot of page, but I had to pagedown 5 times and that would a large screenie to put on this forum.

I don't know if you've missed my post at #9 above, or perhaps you don't want to see it, but it clearly says for new customers before you click the link.

You know, I now wish I had taken screenie, as within time me posting and last plusnet reply, the landing page has totally changed, and is now advertising mobile deals and BT Sport football.

"I don't know if you've missed my post at #9 above, or perhaps you don't want to see it, but it clearly says for new customers before you click the link."

No, I didn't miss anything, and there was nothing CLEAR (or in light grey or very small text so not easily seen) about new.

What is clear though, is I'm being condescended to, and treated as some sort of blind illiterate idiot, who doesn't know how to read a webpage.

And all this back and forwarding does nothing about my original complaint, about how, because you are going to take money from my bank account that I don't owe, will put me into overdraft, which will cost about £20 or so.

Of course, you know I don't owe that money, and someday, probably, but at best, a month afterwards, you will refund the money I never owed you.

And what happens if you don't refund the money.  How does an ex customer complain and ask for their money back?

The Help guides are written for customers, so they're useless.  And there's no email address, but there is a phone number, but I can tell you in advance I'm going to be an irate ex customer, and I'm likely to shout at voice who answers, and what they'll do, is put phone down on me.  Quite rightly.  And if I am calm, they're going to ask about my contract details, which will no longer exist, so they'll apoligise and say they can't deal with my complaint as I'm not a customer.

At least we have seem to have gotten out of the 2 year contracts and back to the 1 year or the 1.5 year ones. I know 24, 18 or 12 months may sound better but you don't exactly need a mathematics degree to know they are exactly the same thing?

So how would a new customer paying the same rental signing up for 1 year, 1.5 year or 2 year stretch (if you still do them?) be more profitiable than an existing customer?