For the first time, Google's monitoring of IPv6 adoption in the UK shows greater than 10% - 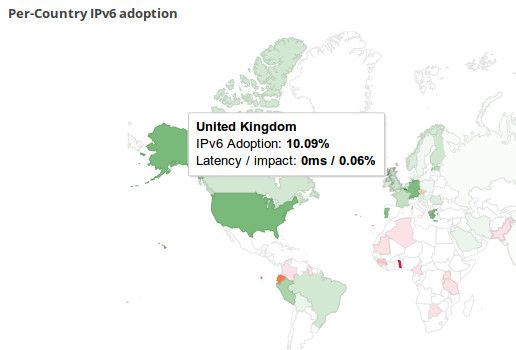 So what happened to those Plusnet promises ?

Over the course of the last few months, we have been performing upgrade work to our core infrastructure, which has involved us building a new core infrastructure. This has been done to facilitate our network expansion needs, but also to support future services, which does in-fact include IPv6 at its heart.

I'd like to think we can do it before the UK reached 1% adoption. I can sit back and relax more this way, given it's currently 0.18%.
I'd love to say we are ready for this and it is something that is being moved on, but there are priorities, some of which are dependencies for us to do IPv6

...and then the classic quote -

"It's coming. A traditional Plusnet acronym for this is RSN - Real Soon Now"

So Plusnet where is IPv6 ?, four years later and UK IPv6 adoption is more than TEN times your implementation target !

But really PlusNet - time to "extract digit" and move on this. When most of the "inferior" ISPs have beaten you to it, it does rather make you look incompetent.

I am looking at other providers. I can't see Plus.net getting IPv6 out within the next year.