Slow reforms to the Upper House are taking place, but are they any better than one selected by birth?

Well no, it's still and indefensible system of appointment by patronage and certainly not representative of the country as a whole. No UKIP, no Greens and no seats as far as I know for the Scottish National Party, and only one seat 'occupied' for Plaid Cymru.

The fact that the second chamber is unelected, gives it's members the freedom to revise, comment and do what they feel is best for the country, without worrying about the whim of the electorate or deselection, if they upset the more radical elements of a political party. They don't have to worry about what's popular, only what they feel is the right thing to do (if the system works as it should). At their best, even those peers who are there by an accident of birth (and those are few, and getting fewer), work hard due to a sense of public service. I accept that there are some hangers-on, and undoubtedly there are some who use their position for their own personal gain, and those should be rooted out, but the words baby and bathwater do spring to mind.

Please don't misinterpret my thoughts. I only think this would work for the second (revising and advisory) chamber.

Taking on board what you say, then why do we need such a large number?

Eight hundred, against the six hundred and fifty in the Commons just shrieks of imbalance. They might be called the second chamber, but not where their numbers are concerned. Consider also that the House of Lords is the largest parliamentary chamber in any democracy and is surpassed in size only by China’s National People’s Congress!

No second chamber system is perfect, the argument is that ours is less perfect than just about all others, and in a democracy that is an embarrassment we do not need.

PS. And just to add after a quick check.

PPS. I still have a small red and gold rimmed milk jug I 'borrowed' when doing some contract work there back in the 60s. Had the complete tea set once but my clumsy old Mum broke the rest! 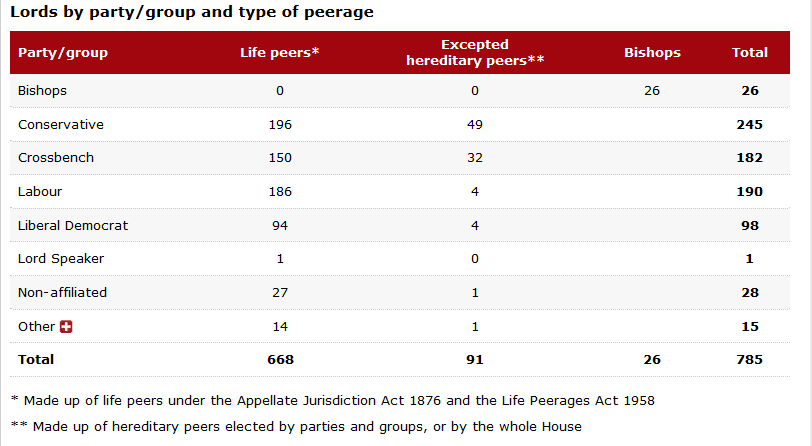 A fair point: I never said it was perfect, only that I think it has advantages. There's certainly room to reduce the numbers, and to ensure that those that are there actually contribute something (that doesn't necessarily mean talking, merely to make a noise, so that people know they're there, there are many ways to contribute).

A few decades ago there were reports of Labour having a cunning plan.  (Don't laugh, it does happen.)  They were going to appoint a large number of Labour peers, then the House of Lords would abolish itself.  It never happened; perhaps the thought of losing the lucrative daily allowance was too much for them.