Would YOU do this?

Would YOU do this?

I'm frequently on youtube at night looking for interesting things to watch as I suspect many others do.

Tonight i decided to search for FPV - First Person View - in other words a live camera on a RC vehicle of sorts - usually aircraft.

I stumbled on a very interesting group of guys flying their sport quadcopters around.... CHERNOBYL!

Not only is that crazy in itself but they have to rescue the odd drone from places like a balcony - which presumably is still radioactive.

Fast forward to 7:42 though and it gets even weirder / scary / worrying. One of the pilots has crashed his drone on the big fairground wheel in one of the pods (if thats what they're called) that hasn't been operated in 30 odd years, been exposed to huge amounts of radiation, is rusty as hell and probably prone to dropping apart under human weight. Despite that one fella actually climbs it and retrieves the drone.

Forget whether or not you have the ability to climb and a head for heights, if you could and did, would YOU climb that wheel?

The radioactivity in Pripyat isn't as bad as it's thought to be (well, by the general public at least), humans can spend a fair ol' amount of time there long before they receive a lethal dose, but radioactivity aside, no, I'd be too chicken to climb that wheel just to rescue a drone...

Reminds me of the famous mountaineer who, when asked why did he climb mountains, replied with the usual "because they are there" answer - and who then got the comment, "unlike the rest of us who just walk around them"

Made me smile anyways

As for flying over Chernobyl, even though my time is short I'd rather end it peacefully in bed rather than wrapped around one of those wheels. No point in looking for trouble having come this far!

Climb that thing?, No...I like wifey's sunday roast to much.

A float tip is pleasing in its appearance and even more pleasing in its disappearance.
Growing old is inevitable...But growing up is optional.
Message 4 of 41
(1,274 Views)
Reply
1 Thank
1 user liked/thanked this post: 7up.

I remember seeing a film about the fish in the waters around Cher nobly. They have got HUGE. I will see if I can find it and add a link.

Looking for the film I see that the ferris wheel never took a paying passenger. It was due to open 2 days later. 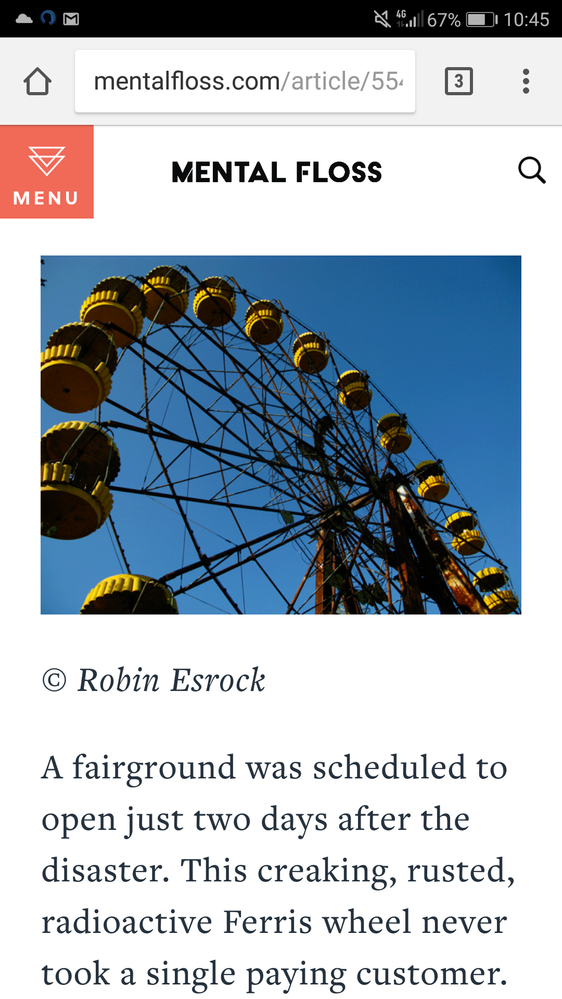 Then you should visit Port Talbot here in Wales @Mav - it looks pretty much the same.


I remember seeing a film about the fish in the waters around Cher nobly. They have got HUGE.

That might not be due to the radioactivity directly affecting them, but because they are living and feeding longer as people are not catching them due to the fact they may be radioactive or in a radioactive environment..


Then you should visit Port Talbot here in Wales

A shock to Port Talbot kids when they go on holiday and see the sun for the first time.


I remember seeing a film about the fish in the waters around Cher nobly. They have got HUGE.

That might not be due to the radioactivity directly affecting them, but because they are living and feeding longer as people are not catching them due to the fact they may be radioactive or in a radioactive environment..

Not just the lack of fishing but the accumulation of radiation in the predators  killing the predators off. The predators eat irradiated prey, absorb the radiation which dissipates very slowly from animal flesh  so it accumulates in them and kills them off and affects breeding in those that survive.

And when the sun does come out at least they have a nice uninterrupted view out over the bay, whereas those in Swansea......

Lived in Briton Ferry when the kids were growing up and a better bunch of local characters you could not wish to meet but the filth churned out by those steel and chemical works made me despair. No community deserves to be a dumping ground for an industry unwanted elsewhere but there you had it, and still do.

I wonder if they wore film badges like radiographers in hospitals do.  I'd be worried about breathing in radioactive dust.

Must be said that they don't seem partiularly concerned about radiation.

My partner (A&E nurse) says that it's just a case of having a shower but i recall being told many years ago that there is a special soap / shampoo for use in nuclear decontamination?

Not sure about the rest of you but i'd rather dump the drone too than take the radioactive material it probably picked up..