WD40, is there anything that stuff doesn't do?

Finally got round to using it to cleaning off the glue left on my car after removing that GB/EU sticker some months back.... or was it years.

I wonder if it works on bald patches. After shave, barbeque lighter fuel?


Compare yourself to who you were yesterday, not who somebody else is today
Message 1 of 47
(930 Views)
2 Thanks
2 users liked/thanked this post: 198kHz, HelloDuck.
46 REPLIES 46

Left it overnight to soak in


WD40, is there anything that stuff doesn't do?

It's certainly an extremely useful item to have around the property.

If ever I'm running low I make sure to replenish - you just never know when it'll come in handy.

It will unstick a stuck lock, but it's not really a good idea in the long term.

Not good at cleaning false teeth.🤣🤣🤣

@TTman Is that from personal experience?  🤢


WD40, is there anything that stuff doesn't do?

Lubricate, cos it's just a solvent (hence why it removes stickers, cheaper just to buy a spray bottle of 99.% Isopropyl Alcohol!!!) with a light oil that is as much use as a chocolate fireguard... 😋

But I can attest that it is excellent at making fire, hose it down on the reluctant fuel and carefully apply a match or lighter, and WHOOMPF!!! You may be missing an eyebrow afterwards, but the flames, goodness me!!! 🤣

Never realised there were so many WD40s .  😲

Got to be honest i've never been overly impressed with the stuff. Yes i use it and keep a spare tin at all times for when the current one runs out but i've noticed that it's useless on seized nuts and bots and more often than not, it will actually trigger the rusting process to start. I've sprayed it over loads of metal things thinking it'll protect them, a few weeks (sometimes days) later the rust is almost out of control.

Tried plusgas for sezied stuff too. It's supposed to be superior but that didn't seem to help much either.

Strange how things pop up on the day.

I cannot take credit for this I've just read on Twitter. 😂

"I've been trying to open this old pepper grinder I found in an old fella's shed. I've tried WD40 to no avail. I think I'll try heating it over the gas cooker in the kitchen to see if that loosens things a bit. I'll let you know what it looks like once I've cleaned it up a bit" 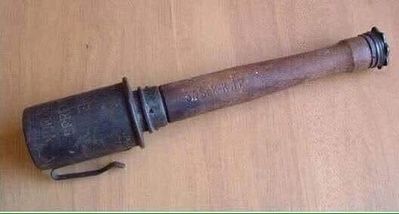 Compare yourself to who you were yesterday, not who somebody else is today
Message 11 of 47
(789 Views)
0 Thanks

@Minivanman Hope that is a pepper grinder and not WW2 german hand grenade!!!!

If those nuts and bolts are really rusted and you want to keep them rather than just grind off and replace with new, then you need to give them a good soak with the stuff at least overnight. Perhaps you do, and granted it does not always work - but it usually does.


Compare yourself to who you were yesterday, not who somebody else is today
Message 13 of 47
(777 Views)
0 Thanks

I'm sure it must be a pepper grinder because apparently it had 'Stielhandgranate' written on the side. 😎


Compare yourself to who you were yesterday, not who somebody else is today
Message 14 of 47
(773 Views)
3 Thanks
3 users liked/thanked this post: TTman, Jonpe, RobPN.


If those nuts and bolts are really rusted and you want to keep them rather than just grind off and replace with new, then you need to give them a good soak with the stuff at least overnight. Perhaps you do, and granted it does not always work - but it usually does.

That may well be the case for parts that you can drop WD40 DOWN onto where gravity can then draw it into the threads. Sometimes even if the bolt is horizontal (rarely) however when it's a bolt going up into the bottom of the car all the stuff does is run off the bolt and does nothing to lubricate it. When fighting gravity it certainly doesn't creep in under the bolt head and then climb up the thread. Worse the more you smother it, the greater the river effect - it runs away like a stream. You're best off using small but targetted amounts. EG a small amount over the bolt head so that it sits there and seeps in. A large amount will see a small stream running away from it and then the rest of it will follow - leaving you with almost nothing left to get in and lubriate anything.

The only real and proper way to use it is to move the bolt head / nut a small bit, apply more, turn it back, then undo again then back / forth / back / forth / back / forth, apply more WD40 (or whatever), repeat the back / forth thing. Takes hours on real pig jobs. I once had 3 bolts to undo under the rear subframe - all were completely seized. I literally managed to turn them about 2-3 degrees and that was it. Squirted in WD40, did the back and forth thing. I'd say i eventually managed to turn each one an extra few degrees every 5 or so minutes. As i managed to undo it more, it gave me more thread to lubricate to carry the WD40 back up into the rusted up thread when i tightened it back up again. Eventually there was enough up there that i could undo each bolt successfully (and consequently smothered in grease before they went back in). Each bolt took me around 1-2 hours and yes my arms were physically exhausted afterwards. Unfortunately though that technique only works for nuts n bolts you can actually move slightly. If they're seized so solid that they won't even move with a breaker bar (and decide to round off if you're really lucky like me) then you're completely stuffed.