Just been fitting a socket in my caravan's toilet area for filling the flush water using a pump (there was already a header plug (only on when pump switch was on at the controller) in there so didn't need to run 12V) instead of loads of jugs. Now to get at the rear of the toilet area, you need to remove/bend a bit of steel held in with several screws. It is quite cramped and getting a large screw driver in is impossible, so stubby screw driver needed - useful tool #1

Also replaced by old Zig X-7 which had died with a 20A 12V psu (Led driver type cheap as chips @<£12 from a UK supplier on ebay) trim pot on it changed the 12V to 13,8V so it also keeps the battery trickle charged. Inline fuse @15A installed in the system anyway so can't overload it. Not useful but a lot cheaper than a caravan psu ~£120.

So anybody got any other useful tools to add?

You get a gold star for the link to that flexible shaft. I have a flexible bit holder but it's like a very stiff spring and frankly not actually very flexible.

I've always found the MK I eyeball extremely useful for spotting the differences between the User manual and reality.

I only have 1 useful tool, it's called 'wifey'...she knows and does everything, then blames me when it goes wrong. I have to say though, the set of long magnetic screwdrivers I bought are a godsend. Very handy for those screws that are in an awkward place, like under the worktops right at the back of caravan kitchens.

A float tip is pleasing in its appearance and even more pleasing in its disappearance.
Growing old is inevitable...But growing up is optional.
Message 4 of 35
(992 Views)
Reply
2 Thanks
2 users liked/thanked this post: Anonymous, rongtw.

@Pete11 yes, after years of scuffing my knuckles when building computers someone said "why don't you get some long neck screw drivers" and it was a Homer Simpson "D'oh" moment. Best tool purchase I made.
Message 5 of 35
(982 Views)
Reply
2 Thanks
1 user liked/thanked this post: MauriceC.

Thanks for that link, looks a useful item to have in the tool box.

The most useful tool I have which I use several times a week and hardly think about is a............Vice.

OK it's not strictly a tool but without it many other jobs would have been impossible to do.

It is strange I have had that flexable thing for ages and never used it. Then yesterday I went PING! I could use it to remove the screws after loosening them.
@gleneagles a bench vice is something I would love to have, but just don't have the space for it, I use a portable vice that screws up to a table, but not the most stable of devices.
@Pete11 wifey (MK1) was out working so of no use in that situation yesterday, but yes agree completely. Latest complaint was she asked me to get a JAR of sauce for meatballs, I looked but couldn't find any, she appears with a SACHET and swears that is what she asked me to get! You just can't win can you.
Message 7 of 35
(925 Views)
Reply
0 Thanks

Welcome to my world.

One of my favourite tools is my rechargeable drill/screwdriver.

Having recently repaired two sheds using lots of long screws, it has been a godsend.

Yes I can use a manual screwdriver but after a dozen long screws my forearm is calling it quits.

On that note @Strat I found these at LIDL this or last year and must say they've been most excellent: 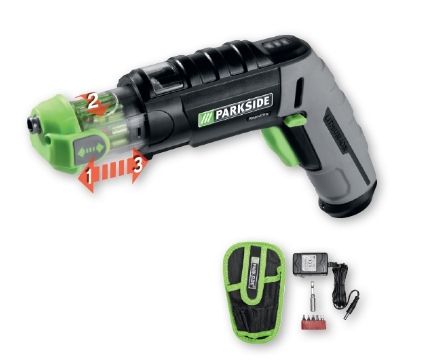 It holds 6 bits internally and for a cheap £15 tool is pretty darn good. I decided i wanted a second one so had to hunt a bit on ebay but eventually someone turned up selling a few of them off unopened so I grabbed one quick. Totally awesome. Bosch make one that holds 12 bits and is mega money but for hobby use the lidl version is ace. No doubt the batteries will one day become useless and at that point i'll dismantle and replace them.

That said surprisingly you'd be surprised how long these cheap screwdrivers last. Last year our neighbours moved out and when doing so the fella gave me his shoulder tool bag thing and said it was mine as long as i took the junk in it. In amongst the stuff was a cheap knackered little cordless screwdriver (the type you can get for between £5-£10), totally flat and no charger. I thought nothing of it other than spares for the motor etc. Anyway a few months ago (after it being left like that in the garage for months) i randomly decided to take it apart and see what i could salvage but then decided to see if the batteries would hold any charge. After 4-5 hours of charging they're still holding the same charge - several months later.

I have a Lidl LiOn drill/screwdriver that the chuck comes off and leaves a screwdriver socket on it.
Message 11 of 35
(876 Views)
Reply
0 Thanks

I to have a Dremel in my work tool box, I probably use it once every 3 months but it has saved the day on many occasions.

I even went in to work in the evening once to fetch it so I could repair the locking mechanisem on a UPVC front door.

Offset screwdrivers can be useful in tight spots.

I'll go along with stubby screwdrivers. I have 3 or 4 in a toolbox, legacy from my 'plumbing period'.

@HairyMcbiker wrote:
@gleneagles a bench vice is something I would love to have, but just don't have the space for it, I use a portable vice that screws up to a table, but not the most stable of devices.

I have a similar sounding vice from Aldi: 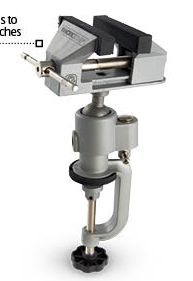 Reasonably good but i rarely use mine for soldering etc.. infact i was doing some soldering the other day and forgot i even had it lol.

Anyway going back to vices I just noticed this and thought of you - if you do think you can find space for a bigger one Lidl are doing cheap £20 jobbies soon:

I bought one last time. They're not the best quality nor the biggest (we have some huge ones on the farm where i help with an engine) but they are reasonable for the money and do a good job. They also swivel round for convenience. A similar vice slightly bigger and better quality is around £40 in my local tool shop.