Definitely look like there has been one cut too many

The Royal Navy in its current form is unable to protect Britain's new aircraft carriers  ,https://www.forces.net/news/royal-navys-ability-protect-new-aircraft-carriers-doubt

maritime surveillance ! Eight US aircraft, as well as planes from Germany, France, Norway and Canada, were temporarily deployed to RAF Lossiemouth   because we dont  have any yet

Para,s and Marines to merge to save money

@rongtw - Maybe we can buy some of those F-52s the Americans appear to have, well they had one at least as Donald Trump managed to sell it to Norway!

There is less money for Defence, Health service, Police, Education and just about everything else so where is the (censored) money going to ?

It's about time the government got it's priorities in order and dealt with the essential things first.

We are born into history and history is born into us.
Message 3 of 10
(562 Views)
Reply
1 Thank
1 user liked/thanked this post: Steve.

I still don't understand the logic of crushing the Nimrod fleet when the MOD didn't have a replacement available and operational. I guess someone deserves a Knighthood for that decision.


There is less money for Defence, Health service, Police, Education and just about everything else so where is the (censored) money going to ?

Good job they can't take it with them!! That's all I have to say.


I still don't understand the logic of crushing the Nimrod fleet when the MOD didn't have a replacement available and operational. I guess someone deserves a Knighthood for that decision.

Same with the illustrious class carriers.. and the (sea) harriers that we had. I don't understand [-Censored-] they were thinking scrapping that lot when they should have been mothballed just in case we needed them. Look what happened in Syria. When Bosnia went belly up we sent in our lot to sort it out and keep the peace. Syria has gone down the same road and we've had nothing to go in there with. David Cameron is as bad as Tony Blair. The pair of them should be tried for treason.

About 20 years ago I remember reading in one of the sunday papers that we had an entire airfield full of mothballed Tornado fighters - the photo showed hundreds of these things all sitting there gathering rust. I suspect they're dog food tins now too.

Yes I understand that Mothballing stuff means keeping it laying round taking up storage space etc but when the dirt hits the fan and you need it, you've got it. Cameron couldn't see the wood for the trees and then starts making bold statements like "It's time for Assad to go"... LOL.. you and who's army pal?

I've made it clear many times that I do not like armed forces or the fact that they are trained killers but I do recognise that for the protection of humanity we do need them. In Syria the united kingdom let down the world. We could once be relied on to show the world high levels of decency in defending life. Now we're a laughing stock having let Russia go and deal with it.

On the russian issue, what annoys me is how they annexed the crimea without a shot being fired but they couldn't go into Syria and do the same thing? Pathetic.

At the other end of the scale politicians cancelling successful UK defence projects like the TSR2 ( https://www.youtube.com/watch?v=PhXcd-881xA ) at the last moment. Then ending up buying foreign.

I was going to post this, under a new thread...

@AlaricAdair  i agree TSR2 would have been a world beater if it wasn't for Politicians ,,years ahead of its time

And there is a lovely example at RAF Cosford museum 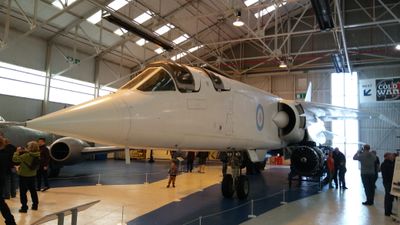