Me and Wifey have kept filling up the bird feeders with seed, peanuts and other various goodies, but the peanuts in particular have been going at alarming rate. And now I know the reason... 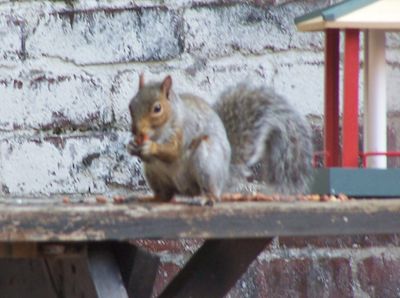 I thought squirrels hibernated in winter.

A float tip is pleasing in its appearance and even more pleasing in its disappearance.
Growing old is inevitable...But growing up is optional.
Message 1 of 10
(516 Views)
Reply
0 Thanks
9 REPLIES 9

Went to lunch at a local garden centre.... they have a couple of bird tables, with hanging feeders , it is near some trees and woods, so gets loads of birds on it... BUT.. there is also a couple of squirell familes in the trees and it is kinda fun to watch them scrambling about the branches, and jumping from tree to tree,.. they come down onto the bird feeder and do more acrobatic tricks to get the peanuts. yesterday one was entertaining us for the whole time, about 20 minutes, with his efforts.. !

Great to look at watching them play etc, but not so nice when they find a nice home in your loft!

They don't hibernate, they just store their food in your car: https://www.metro.news/thats-nuts-squatter-squirrel-fills-car-with-acorns/882115/

We have a nature reserve next to our back garden and gets lots of greys active throughout the winter. SWMBO puts lots of feed out for the birds, on our 50yd log washing line, well out of their easy access of the squirrels. We find they often collect the spilled nuts from the ground.

Maybe its the red squirrels which are supposed to hibernate, but there are not many pockets of reds left. I have not seen a red for 40 years..

We have a few that call to our back garden, yes they are fun to watch you want to see the cat trying to catch one

As you can probably guess I like squirrels, too. The one in my avatar was taken in Greenwich park.

We have a squirrel (at least I've only ever seen one at a time) s/he came and knocked on our garden room window the other day then sat back on the lawn looking longingly at us.

Why do people find furry tailed tree rats so attractive? The grey variety are very similar to their ground living relatives and should be treated the same way!


They don't hibernate, they just store their food in your car: https://www.metro.news/thats-nuts-squatter-squirrel-fills-car-with-acorns/882115/

That reminds me of a car i bought years ago from up north. Travelled most of the day to get it (only a £500 car but it was a specific model i wanted) got there, picked it up only to find it stunk of wet dog inside (yuck). Previous owner had also had a footswitch fitted to turn the main beams on but at the same time it would disconnect the dipped beams.. it was one seriously weird setup which i reverted back.

Anyway next day i thought i better open up the bonnet and do a oil change on the thing. To my surprise it looked as though I had robbed a squirrel of its home / stash / materials as there were nuts all over the place, insulation missing from the AC pipes and what resembled half a bird nest too - along with peanut shells confirming it was a squirrel. I felt guilty that i may have deprived one of a nice snug home! It was the middle of winter too..

Generally I like squirrels but despite the bad reputation the greys have for killing off the reds, I did see a red down south a while back in the middle of kent - 2009 i think it was. I was gobsmacked along with the boss who i was having a spat with at the time. We just stood there mid-argument amazed at the sight of it. When i was a kid there used to be loads of the reds in the woods behind us.