The biggest and brightest full Moon of 2017 is coming this weekend, on Sunday night, Dec. 3rd. It's a perigee "supermoon," almost 8% wider and 16% brighter than an average full Moon. Three nights ago, Eliot Herman photographed the waxing orb shining through thin clouds over Tucson, Arizona: 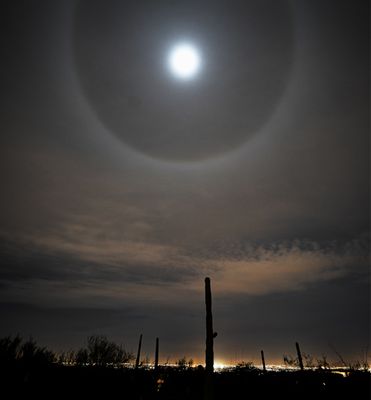 Bright moonlight beaming through ice crystals in the clouds formed a beautiful 22-degree lunar halo," says Herman. "I expect more of these in the nights ahead as the 'supermoon' approaches."

Full moons vary in size because the Moon's orbit is not a circle, it's an ellipse: diagram. One side of the Moon's orbit, called "perigee," is 50,000 km closer to Earth than the other side, "apogee." This Sunday's Moon becomes full only 16 hours away from perigee, closer than any other full Moon of 2017.

Some people say you can't tell the difference between a supermoon and a regular Moon. A 16% difference in brightness can easily be masked by clouds or the glare of urban lights. Also, there are no rulers floating in the sky to measure lunar diameters. Hanging high overhead with no reference points to provide a sense of scale, one full Moon looks much like any other. To get the most out of Sunday's apparition, try to catch the Moon just as it is rising or setting. This will activate the Moon Illusion and make the perigee Moon of Dec. 3rd look super, indeed.