I know our weather is horribly unpredictable - BUT - who's nicked our summer?🤔

I think you blinked and you missed it
Customer / Moderator
If it helped click the thumb
If it fixed it click 'This fixed my problem'
Message 2 of 26
(422 Views)
Reply
1 Thank
1 user liked/thanked this post: 7up.
Highlighted

Probably, but it must have been nice while it lasted.😁


who's nicked our summer?🤔

It caught Coronavirus and went to bed to recuperate it may be some time.

It was fine until the football started.

Behind every successful man is a surprised woman
Message 5 of 26
(399 Views)
Reply
2 Thanks
2 users liked/thanked this post: jab1, idonno.
Highlighted

@Mook wrote: It caught Coronavirus and went to bed to recuperate it may be some time.

You’d have thought it would be hotter with a fever

Customer / Moderator
If it helped click the thumb
If it fixed it click 'This fixed my problem'
Message 6 of 26
(392 Views)
Reply
2 Thanks
2 users liked/thanked this post: jab1, Mook.
Highlighted

Spring is the new Summer.

A british summer is like my love life, there's just nowt there... 🤣

Well we might get storms, which I don't mind watching. Apart from that time when a lighting bolt came down during the day about two doors down from me, on the street as I was walking back home.

Fork lightning. I even remember the shape of it, I was that close. Freaked out and got home ASAP. Oh Well.

My door bell rang this morning and on looking out of an upstairs window I saw nobody there.

I went downstairs, opened the front door and saw this on the step. 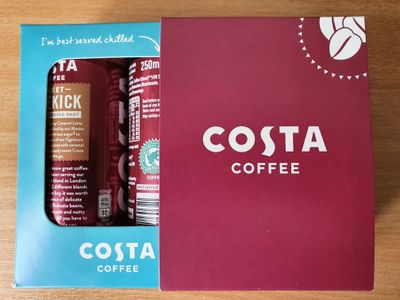 I initially thought it was a large promotion as the same was on most door-steps on my road and apparently further afield.

Later it transpired that the packs were being distributed free in the area because they had a "best before" date of 31:08:20.
Costa didn't want to just bin them so hired a van to go round and distribute the packs.

I'm told that an iced coffee on a hot Summer's day is very refreshing.

If we get another hot Summer's day fairly soon I'll try it.

We got cans of coffee sent in our shopping order from Sainsbury on Monday but they were by Starbucks and were vile. I too thought it were a promotion but it might have been sent for the same reason.

@Strat If we don't get the Summer, can I have the coffee? I'm seriously missing my Costa treat. 😊

You can keep those, @Mook - I don't like Starbucks.😁

They're in the bin @jab1 Starbucks Coffee is just plain nasty. Goodness knows where they get their beans from.