Our system is not fit for modern purpose, for though I oppose views of such as @wotsup's, I think the loss of constituency representation for national proportionality would make for more disconnectedness.

IMO one of the best systems for recognizance of both  elements is the German, built after the terrible period of Nazism.

No one has to agree with my opinion, but in the time I have left a miracle would be nice.
Message 16 of 27
(443 Views)
Reply
1 Thank
1 user liked/thanked this post: Minivanman.

It's certainly time for a shake up and if not fit for purpose then we should indeed change it, and whatever side of the fence you sit, at least the recent kerfuffle has shaken the dominant two party system to it's roots I'm sure we can all agree on that.

What gets right up my nose is these so called 'safe seats' where a candidate from outside of the area (and in my old constituency, outside of the country) gets parachuted in election success assured. Shorts lists are another bone of centention with me as well where in the constituency next door to ours a seat had been reserved for a female only candidate with the one chosen not even living in the same County and yes, she got elected... and don't even get me started on those ex-pats that were allowed to vote for Brexit.

Damn it, I've mentioned the B word! :tickedoff:

I Vote that @Minivanman be banned for at least 30 minutes, due to his bad language, and use of the B word in his own post ! :shocked:

Just reading that yet another MP has jumped ship, this time Labour but not to go on board with that Independent Group. Cannot say I am surprised given that he is of the Jewish faith - how on earth can anybody least of all this chap be in any political party whose leader is a friend of Hamas... along with a few others that have question marks over their heads.

It is totally wrong for an MP to be affiliated with a party and its manifesto when they are standing for election and then leave that party and go in a different direction, this shows no respect for the electorate - the thing is that the present bunch are oh so keen to have a peoples vote on something that was decided in 2016 and again in 2017 but will not allow their constituents to have another vote on their completely changed circumstances,  they are devoid of integrity..

Maybe they are afraid of losing that £500 deposit needed if they got less than 5% of the vote.

@Minivanman wrote:... and finished us as Mayor!

It will be interesting to see what happens at the next general election in terms of turnout.

Will the current problems make enough people angry and result in a larger turnout or will the opposite apply, with some having seen or confirmed that irrespective of whom they vote for a individual MP will either do as they please or support the party irrespective of the wishes of those who voted for them.

Well if there is not a bigger turnout and an even bigger turnover of MP's, I for one will be very surprised not to say dissapointed and left wondering what the heck does it take for folks to get off their derrières. Sadly (and we have all seen it) there are those areas that even when they do, they will vote for the same political party time after time ad nauseum even if they put up a garden gnome as a candidate.

At least you know what you're getting when you vote for a Gnome!

Just so long as it does not look like this one. :wink: 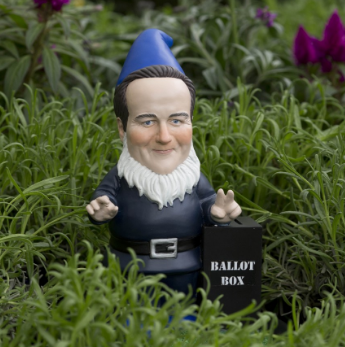