We have one of those near us in Carmarthen buried under the car park near County Hall. No sign, but we all know it's there... and who it was meant for! 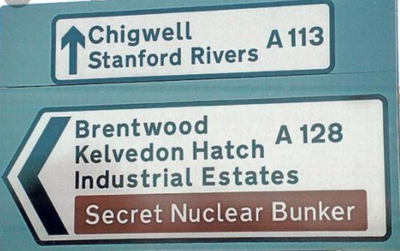 @Shep41 wrote:
Can anyone define the word Secret..?

@Shep41, well obviously no one is going to say, as that would be telling.

It's probably just the name of somebodys house.

Haven't they mostly been sold off and converted into living spaces and cannabis farms?

There were secret telephone exchanges too eg Birmingham Anchor beneath Newhall Street.

Construction of the new exchange started in 1953 with a cover story was that a new underground rail network was being built. Work progressed until 1956 when the public were told the project was no longer economic; instead Birmingham got its underpasses through the city to help relieve congestion. Nobody had realised that an underground exchange and tunnel system 100ft below Newhall Street had been completed at a cost £4m. Birmingham's civil defence meeting records do not mention the exchange but that's not surprising as local government wouldn't have had a say in the matter.

I would have to kill you after I told you

So if all these 'important' people are going to survive while us lesser mortals fried under that mushroom cloud, who would they be in charge of once the dust had settled and it was safe to emerge.

There are a number of these 'secret bunkers' across the country except they are no longer secret.

A number are open to the public, the one at Nantwich near Chester is 35,000 square feet, well worth a visit if you are interested in such things.

One thing that sticks in my memory is a film that is shown on a continous basis made by the BBC but was never broadcast showing what would happen in the event of a nuclear strike, scarry stuff, you would be better off near the centre of the blast rather than 10 - 20 miles away as the injuries caused would be horrific as would the enviroment you would be left in.

The adverts shown on TV about hiding under a table for protection were just nonsense, might have made sense in WW2 but not a nuclear war.

Have any more of these Bunkers appeared since the Referendum ?

If they're secret ones we wouldn't know.

Well this is our secret one!

They are being fitted out as we speak by and for the doom and gloom post brexit journalists that write for the Guardian.


Have any more of these Bunkers appeared since the Referendum ?

Only for those who did not like the result.