One of the big problems is most white, middle class, middle age and above LOVE Donald Trump and will hear nothing said against him.  There is also the huge issue with Black Lives Matter and White Lives Matter, the latter being primarily White Supremisist groups like KKK.  As Mr T is soooo decisive, my personal opinion is some serious unrest will occur before too much longer that will be racially motivated.  Things are not all they seem under the star spangled banner...


The front runners of the night were Elizabeth Warren, Jo Biden and Bernie Sanders..

Jo Biden says he didn't do anything wrong in the Ukraine.

Bernie Saunders says he is in good health despite having a heart attack very recently.

Is there no Emily Maitlis equivalent in the US who can tell the candidates what they stand for?

Elizabeth Warren stated she would take 2 cents in the dollar from the top earners.

What did Biden do wrong in Ukraine?

Saunders looked and performed well in the debate but it is unlikely his heart attack will not influence voters. He is also too far to the left for most democrats.


What did Biden do wrong in Ukraine?

Trump's 'friends' are still trying to find something I think.

The US House of Representatives has voted to impeach Trump. He will be only the third president to be impeached whilst in office.

This is, however, as far as it will go. The Senate has to vote on it and they will not vote to impeach. The Senate is controlled by the GOP and in an election year the senators will not want to rock any boats.

From what I understand they don't have the numbers to carry this through.

He'll get his wrist slapped and still gain a second term. Just wait and see.

Its a proper pyrrhic victory for the stupid democrats,  seems that it is not only in UK that the left has gone

stark raving bonkers.  It will not get through republican controlled senate and all it has done is harden the

entitlement that they should be in the white house..  The Democrats are actually doing the same as the remainers

did in UK - trying to overturn the vote of 2016 because they did not like the result,  and look how that turned out

the voters turned on the remainers and the USA electorate will turn on the anti-democratic Democrats...

They have shot themselves in both feet with a .45 Magnum and virtually ensured that Trump will get back in,

just like our own Trump did.. Voters love leaders with an actual personality ....

Trump's public rating has actually increased this week. This is what happened to Clinton's rating after his impeachment attempt.

The Democrats really need to resolve who will be their candidate in 2020 and they need to do it fast if they stand any chance of success. They have an uphill struggle.

Whether real or imagined many are led to believe that world is in far more danger than it really is, either because of social or political upheaval such as Brexit on the home front, or global warming internationally causing some sort of  collective hysteria.

Groupthink? That was the Orwellian sounding term coined back in the 70s by an American psychologist I think it was and serves to get guys like Trump into the white house and Boris into number ten as we search for some sort of certainty and stability. 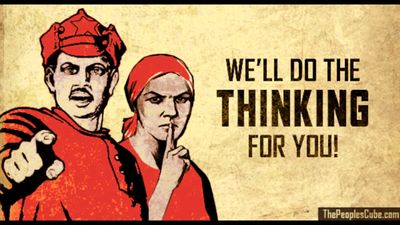 Not a good way to select and elect a leader of nations as once these populist are in power they can be hard to get out - especially when they start changing the rules or more insidiously, peoples opinions which is why we must also defend democracy even if we do not agree with the result, and multi party participation even when likes Corbyn, Boris, Farage and that little Munchkin north of the border drive us to distraction.

As for Trump, 'should we be bovvered'.

The truth is out there. 🙂

Quite likely Trump will get in for a second term.....the only question is......

Will that be good or bad news for the UK ?

What a bitter and vicious woman Pelosi is,  but with her actions she has more or less guaranteed Trump a second term, the democrats in USA are in the same mess as Labour and Libdums in UK,  so consumed with hatred that 'they lost' in 2016 that they cannot see the wood for the trees.

Just about sums up the petty democrats,  just like our remainers they never thought they should respect 2016 vote..

with their lunatic actions..  An American legal expert even suggested that if

are deleted from the record - so Trump could be around  for another 9 years,  and

I'd say that on both side of  the Atlantic things are pretty well wrapped up for the next four or five years with Trump on one side and Boris on the other.

The markets are going to love it of of course it it offers them some sort of stabilty.

As for Europe and the EU, well we'll just sat back and watch it all disintegrate, literally.