Just saw this and was reminded of the threads on pot holes here.

Thanks, I'll save that!

Just back from our local garage where the car is having as already mentioned it's third front coil spring in as many years only to be told that the offside one has also cracked and needs to be replaced. Have it in hand with the Local Council and have even taken some more photographs as they want to know would you believe exactly which pothole did the damage. With so many to choose from on the road between Cardigan and Carmarthen I'm spoilt for choice but 'luckily' there are a couple of right brahma's just along from that garage - so camera ready for when I go back later (by bus) to collect the car.

If they want pictures of potholes.... they can have 'em.

"The most common problems were damage caused to tyres, suspension and wheel rims, with repairs costing an average of £267.

As if that wasn’t enough, local authorities paid out more than £1.6 million in compensation to motorists during 2014/15, a figure that could be at least twice as high as only half (53%) of motorists are aware they can claim for compensation"

I wish I'd sent our council the bill for an offside front wheel bearing replacement after hitting a bad pothole.

Unfortunately by the time I discovered the faulty bearing the pothole had been filled in.

I seem to have a distant memory of something about Pothole liability payouts.... but am not 100% sure of which way around it was..

I think it was.... If you have damaged your car, through a pot hole, that the council/roads department "know" about... ( usually indicated by white painted border for the repair men to work to.)  then they will pay out... but if its "not known"   i.e. a "new" one,.. that is not marked, then they don`t payout...

Whether this was something "local" or national, I am not sure... 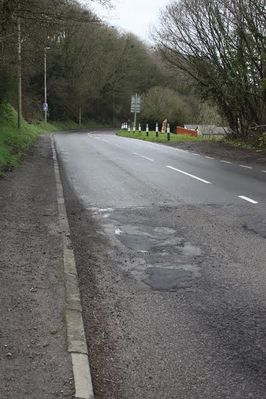 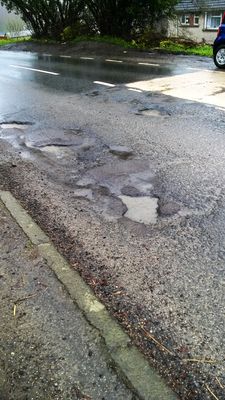 Well now amazingly @Strat this morning I took my car into have the front springs done and while there I took a photograph of the offending pothole which as luck would have it is just a few yards up the road. Went back this afternoon to collect the car and the garage said "But the pothole has been fixed!" So I said "Really, I'll go and check". And this is what I found, one 'fixed' pothole. The Council really are having a laugh if they think for one moment that is a repair but fortunately I now have the evidence to show what a shower they really are.

"Banged to rights" my old Dad used to call it and all of it and more going into my claim for the repair costs. Now four front springs in as many years. Outrageous.

That is how they "fix" them these days. One guy with a bucket of gunk. Been doing that round here for several years.
Message 6 of 37
(2,237 Views)
Reply
0 Thanks

Instead of doing the job right  the first time

'Doing it right' as some suggest is a costly business.

Sheffield is undergoing a £2 billion repair of all roads, footpaths and lighting.

All roads are being skimmed and resurfaced from end to end and the work is long overdue.

Many of the roads I drive on now in Sheffield are an absolute pleasure but the work is ongoing.

At the moment BT or whoever are working their way (putting in what I assume/hope is fibre optic cable) along the Carmarthen to Cardigan road near here - on the same road as that pot hole - and in doing so are digging and filling as they go so I can fully understand why the roads get in such a state, but to dig up recently repaired and tarmacked ones as they are doing and leave 'em in the way they do cannot be right, and I cannot for the life of me understand why there is not some sort of rolling program of road repair work following them along. Too easy maybe?

Pot hole outside the house now 'filled' and  yep, a complete and utter waste of time. Guy was here for about ten minutes with a bucket of black sticky and has left a half filled hole.

I'd complain to the council, which is what I did a couple of years ago after I watched a couple of cowboys 'repairing' a hole in our street.  I say a couple, the driver didn't even get out of the cab, and what happened had to be seen to be believed!

No loose material was swept from the hole let alone dig or 'square' it up, a bag of black stuff was tipped in, roughly levelled by using the guys boot, then the driver rolled it using one of the wheels of the truck!

Within a couple of days the job had been re-done to a more satisfactory standard, what an absolute waste of money.

More recently, the council were fixing a couple of pot holes a couple of feet away from the one referred to above, and when I walked past later that day I checked their work.  I noticed they'd not bothered to repair a 'developing' pothole about a foot from one of the repairs, so why not dig all three out and make one patch?  I despair.


Pot hole outside the house now 'filled' and  yep, a complete and utter waste of time. Guy was here for about ten minutes with a bucket of black sticky and has left a half filled hole.

The problem is you are driving the wrong vehicle.

Get one of these and pot holes will no longer be a problem for you,

Y'know what, that sort of crossed my mind yesterday!

Maybe our roads are no longer suitable for the average small car, especially one that is ten years old and especially in rural areas? Not the one you suggest maybe but time for a little baby four track like a Suzuki Jimny. 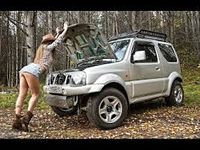 I used to hear that French cars had very soft suspension because French roads were very bad.