Uk citizens give their opinion

No remainers were harmed in the making of this report.

Brexit Promised cake .... But just delivers a stream of Cack
... and expects us all to just swallow it
Brexit - Built from Bovine Manure by Bots
Message 1 of 83
(747 Views)
Reply
0 Thanks
82 REPLIES 82

I wouldn't crow too much. Libs and Greens together only got 15%. So much for the big comeback by the LIb Dems.

As for Labour holding on, I should bl**dy well hope so.  They are the sitting party and the Labour candidate has lived in Peterborough for at least 30 years.

Sure, I’d love to help you out. Now which way did you come in?
Message 2 of 83
(733 Views)
Reply
2 Thanks
2 users liked/thanked this post: RobPN, Minivanman.

By any measure it was a resounding success for the Brexit party, and who have Labour elected, just another fence sitter despite Peterborough voting 60% leave in that EU referendum. I wonder how much the ethnic mix of it's population impacted on the result.

Talk about being on a knife edge.

Lets hope that unlike Fiona Onasanya the previous incumbent, Lisa Forbes does not drive too fast towards Parliament to take up her seat as MP, and if she does...

Not a landslide for Labour by any stretch of the imagination.

I know someone who always votes Conservative but is a staunch Brexiter, however she refuses to vote for anything other than her beloved party.  There are many die-hard Con/Lab supporters who do the same, but if the votes of all the Brexiters amongst them had gone to the Brexit party it would have most likely had a resounding victory.

"And there's the rub" as was said in Hamlet, they might dream of Brexit but some would rather die than vote against the Party given the choice as they had been here - and yet it still nearly happened.

Labour is far and away from being home and dry nere, as for the Conservatives they are sinking beneath waves of their own making.

May Gods forbid this current lot of Labour louts get anywhere near running our country.


Don't limit the friends you haven't met with arguments you'll never have.
Message 5 of 83
(690 Views)
Reply
0 Thanks

Extract from one of the many election circulars pushed through our door :

"The Brexit party can't win here . Every election for the past 50 years shows only the Conservatives or Labour can win.

So a vote for the Brexit party, will let Corbyn's candidate slip through."

Either that, or somebody wants to grind the other side of the same axe.

As Farage apparently snuck out the back door after labour increased its lead and the LibDems and Greens increased their share of the vote - as the largely uncontested Tory vote collapsed,

... all despite The Brexit Party throwing the full weight of its undefined and possibly foreign funded money promoting Loser Mike Greene's campaign in what was described as Brexit heartland...

- thereby showing his total lack of quality as a contender; potential member of UK parliament and representative of the people of Peterborough

- but demonstrably upholding of the standards of an alleged freehold ground rent profiteer and choice representative of broker and son of a broker Farages’ Brexit Party. 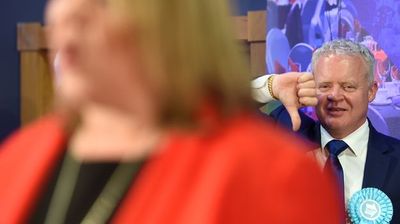 as have similar claims that Greene actually is Davies (with face filler makeup disguise) trying to get the UK public to pay him twice for doing nowt.

Brexit Promised cake .... But just delivers a stream of Cack
... and expects us all to just swallow it
Brexit - Built from Bovine Manure by Bots
Message 9 of 83
(639 Views)
Reply
0 Thanks

I'll pass on the sour grapes thanks, along with your chlorine flavoured chicken.

Labour part share of vote was down 17%, brexit vote split between Brexit party and conservatives, libdums got a bit more than usual.

Non of the three major established parties can take any comfort from result  - Farage has promised in future general election not to field brexit party candidates in any constituency with a sitting pro-brexit conservative candidate.

Then Labour really could be wiped out, they would lose many northern seats fed up with their sitting on the fence stance over brexit.

Who said politics is boring?

Really surprised to read earlier that even with a 'win' Corbyn was still non committal on a second referendum.

Don't limit the friends you haven't met with arguments you'll never have.
Message 12 of 83
(597 Views)
Reply
0 Thanks

Only a couple of days on and the knives are already out for the newly elected MP That didn't take long and not a single Brexiteer doing the damage.

Well we might dislike what some people got up to in the past, but are squeeky clean politicians what we need.

Didn't do Theresa much good though did it, although Cameron's 'pig in a poke' needed some explaining as does Lisa Forbes and her liking, endorsing and ignoring that anti-Zionist tweet less than only what, three months ago? On that basis I'd not want her as my MP that's for sure.


Don't limit the friends you haven't met with arguments you'll never have.
Message 15 of 83
(549 Views)
Reply
0 Thanks
Topic Options