Will ask about the penicillin allergy again before I receive it

My wife and I booked ours online because our GP had no vaccine and the very next day sent us a text message offering an appointment for last Saturday.

We had to decline because they stipulated that they had no car parking facility and we must attend on foot. It is 3.5 miles to the surgery they wanted us to use with no public transport facility, which we can't use anyway. Our local surgery was not usable.

I have spent an interesting afternoon reading the C1012 Patient Group Direction for the AstraZeneca vaccine. Each vaccination centre has to have access to adrenaline in case of anaphylaxis an d also telephone access. Loads of information in that document. I have not yet plucked up courage to look for the same info for the Pfizer one, but I will.

Had mine yesterday...the Oxford one at my doctors. Must admit my doctors is very well organised from the flue jab to other appointment  thro to the covid jab. Had a two minute wait outside, got called in, got the jab then went back outside to sit in my car for 15 mins then went home. Sorted!!!!


The phone rang just after lunch time and it was the local hospital asking if any staff wanted the Corona vaccine. They had had 30 people with appointments for jabs who failed to turn up and the vaccine would have to be thrown away, it was the Pfizer one.

Nice to see someone with a bit of common sense.  I'm sure some people would have thrown the vaccine out rather than give it to someone who didn't fit into the stipulated categories.

Regarding the low uptake among ethnic minorities, there is apparently a lot of 'fake news' (Trumpism, remember him?) on social media etc. that the vaccine causes infertility.  Well, I have it on good authority that death is 100% guaranteed to cause infertility!

My OH had the Oxford one on Sunday at hub, no side effects at all, not even a stiff arm. All went very smoothly and second jab booked.

"Well, I have it on good authority that death is 100% guaranteed to cause infertility!"

That is unless you left a small donation behind duly frozen. 😁

I looked this up today, as being 43 I have had seizures in the past. When I was younger I didn't take them really seriously and I know friends who've had them. Hmm before I had any (around 8 years ago), I didn't really understand the severity of it. Hmm having to hand my driving license in for two years for Grand Mal Epilepsy, going unconscious, could have lost my life (or caused someone else to) had I been driving and crashed. Feeling weird, collapsing losing consciences in the meeting room. Fun and games of biting your tounge afterwards and your muscles hurting.

So yey, I get free prescriptions, only caveat is a seizure can kill you itself regardless of what you may be doing. Trust me when you get the 7 second warning (7 seconds away. as the song once said) and feel faint, think you will collapse (done that before) and may not wake up again, you'll need a change of underwear afterwards. I know a song about that. Luckily I've had a few false alarms, and I've not been driving but been up in London and had a beer or three to calm down afterwards.

I do drink alcohol, and they've done brain scans on me to check for brain tumors. Found no reason why I am am having them, just give me general advice to not go mad on alcohol.

My niece, who is 6 has had one, and they asked if there was a history of it within the family. My sister said yes and told them about me.

Now having had them, I would honestly say I wouldn't wish it on my worst enemy. Previously I could think of a few people. No-one one here, just people I know (well have known) in life. Oh Well as Fleetwood Mac said.

So I am looking at whether I should have one earlier, and it looks like I will. From my research today it looks like I may be in tier 6 (underlying health conditions). Not that I want to jump on the bandwagon and jump the queue, just I need to be a bit pro-active and if I need to get one sooner rather than later then I will get it done. Wonder if my niece will too.

I'd recommend anyone to do the same in my position. I will see if and when they call me up.

Just to let you all know guys, I'll not be moving to Germany anytime soon. 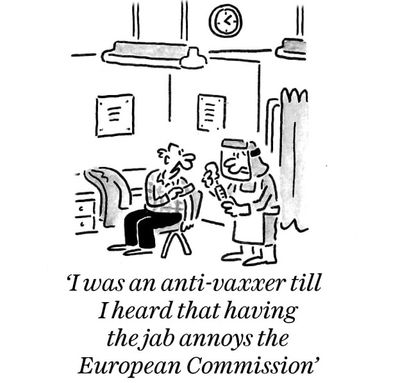 We both had the Pfizer vaccination yesterday, four days earlier a neighbour had her vaccination in the same centre as us but had the Oxford one.

The difference between us is that she has asthma and previously had corvid....

I wonder if the Oxford one is less likely to cause problems for those who have had corvid or have underlying health problems.

For those that follow such things as the current kerfuffle with Ursula Von Der Leyden, the EU and the attempted hijacking of this vaccine, on checking, the German word for 'oversight' is Aufshicht.

That's one thing that "amuses" me about the BBC news pages.

News that makes the EU look bad - no comments allowed

Never had (or noticed) that myself with the BBC comments @billnotben - but the Guardian certainly.

Mind you, it would not surprise me in the least.


the German word for 'oversight' is Aufshicht.

I'm pretty sure it's Aufsicht, not least because the sh sound would be represented by sch in German.  Nicht wahr?

You are right of course, I just rather liked my version. 😉