One for the old skoolers: ACME

One for the old skoolers: ACME

No, not the supplies that Wile E Coyote uses to try and catch that bird he fancies... I'm talking about the metal thread.

Where can I get it as a stud bar? - I've got a short piece from an engine load leveller which isn't long enough.. I'm making another one but need a nice long piece of ACME stud that has a 5/8 diameter to fit into the existing bits of metal (two nuts and a solid round bit of metal with a hole in the side) like this:

As you can see the new load leveller is going to be significantly longer (the engine it's lifting is huge) so I need a nice long piece. I did buy some TR16 from ebay but it turned out to be metric instead (despite sending close up pics of the above bit to the seller with caliper measurements in the pics). I paid about £15 for it so I'm hoping to possibly find a supplier of it for the same price as I also need to get some more holes drilled somewhere with a pillar drill... or buy a pillar drill...

I'm also not sure if it is General purpose, Stub or Centralizing... so any advice would be good please!

Instead of lengthening the threaded bar wouldn't it be easier to fit a longer lifting beam and centralise it on that? No matter how big your engine is the centre of gravity is surely going to be within the extremities of the current threaded bar....

Alternatively, and likely preferably, why not just extend the chains to the wider lifting points?

Was that meant to be blank?

No but when I post a reply with pictures the forum just loses it @Chris @bobpullen. I'm not typing it all out a third time. I just tried to copy the text from the html tab of the editor but the moment i clicked html it lost all my input again.

Anyway... the black bit of metal under the red piece IS the longer bar that you mention. I can't however put the bracket for the threaded part in the middle as the strain at the end of the bar might prove too much for the bolt holes and snap them. I did have pictures to show you but the forum won't let me. Infact i'll be surprised if it accepts this too.

We use HPC Gears for this sort of stuff at work. Won't be cheap mind

Well it seems that this isn't actually acme thread... but a worm thread instead (which apparently has no specific standards or threads per inch etc).

Stuffed is one word that comes to mind....

I can't help but feel you are overcomplicating this, and giving yourself unnecessary work as a result.

I've safely lifted a variety of engines, including a huge 5L inline-6 with gearbox attached, with a leveller just like yours and never had to consider making modifications to what is a purpose-designed product.

That may be so... but the engine I have has two loops. The chains barely reach them and when lifting with the crane, the loops are pulled inwards. They are made of steel that is 3-4mm thick. 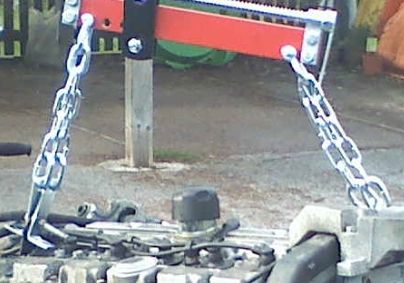 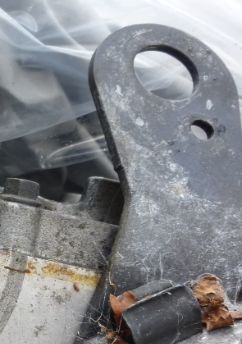 Now that might not sound like a problem to you but when bending them back (to refit other parts) this again flexes the metal. If the engine needs to come out again (6 times so far for various glitches) then thats more flexing... and thus it won't be long before they snap - allowing my engine to swing freely on the crane and take that toppling over with it.

What you say about lifting bigger engines with the same leveller may well be correct but this particular engine is a tad tricky. I can't attach the chains to the front or rear of the block (and even if i could the autobox on the side would still unbalance it). There are no other points to attach them to unless I start using those tiny rocker cover bolts... and I don't really like the look of those considering the heads are smaller than the holes in the end of the chains.

And yes.. I do agree that this has become over complicated... but it's not like I'm happy about it.

No, I agree it does sound like a problem.

Lifting straps, attached with D shackles, might help to spread the load to other parts of the engine rather than using the lifting eyes. Alternatively, could you remove the eys and bolt your chains straight into the block at the same points?

Forgive me for being stupid but clearly this is an engine from a fairly old car, a workshop manual would provide the safest procedure for removal of the engine ?

An engine lifting crane can be hired or purchased from a number of suppliers which would make the task quicker and easier.


Lifting straps, attached with D shackles, might help to spread the load to other parts of the engine rather than using the lifting eyes. Alternatively, could you remove the eys and bolt your chains straight into the block at the same points?

I had mulled over these ideas already but because the engine is so big it's hard to get it in / out properly without being able to adjust it's angle. The gearbox has to drop down first while the other end has to tip up in order to clear both mounting points. I can remove one mount from the engine and just drop it but getting it back in and aligning it is a rotten job - a real PITA as there are three bolts and the engine has to be at the exact angle or they don't go in properly. Someone else already rounded the threads off years ago trying it like that.

Removing the eyes is not possible. One of them is part of the mounting frame for the air con pump and alternator and the other is bolted onto the side of the head above the gearbox (a great place to put extra strain on the stretch bolts holding the head onto the gasket huh?). Anyhow if i remove that, the chains would need to reach right down to just above the gearbox and wouldn't be long enough.

So.. i've come up with another idea. I'm just going to mount the threaded part to the end of the black bar (not the middle because the big nuts barely have enough space to turn so getting a socket over would be impossible). Then I'll put my chain holes in at each and and simply have the screw offset at one end instead. I've checked with a lifelong metal worker / machinist and he says the bar will be more than strong enough to handle the load. The stupid thing is I did get some TR16 trapezoidal thread that has 1m in length (bought by accident thinking it was the same thread on the load leveller) but then I'd need to get the round middle bit remade and I don't know if trapezoidal taps are common in the only two machine shops we have here.


Forgive me for being stupid but clearly this is an engine from a fairly old car, a workshop manual would provide the safest procedure for removal of the engine ?

An engine lifting crane can be hired or purchased from a number of suppliers which would make the task quicker and easier.

The workshop manual does not actually cover the removal of the engine. It's a volvo lump... I don't think renault ever thought it would need to happen. I know how to remove it, it's just the piece of kit I have isn't really long enough to do it.

The crane isn't the problem - i have one of these in the garage that i bought years ago: 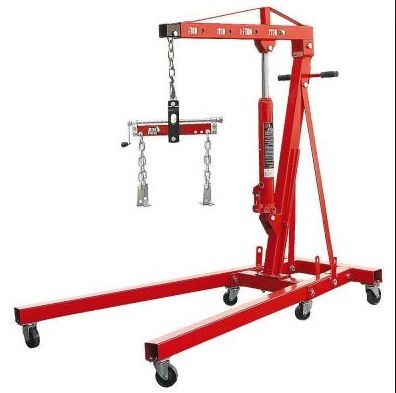 The problem is the load leveller you see hanging on the end of it. It's just too short!!!

If it was a bog standard engine with simple chain mounting points like this one i wouldn't have a problem: 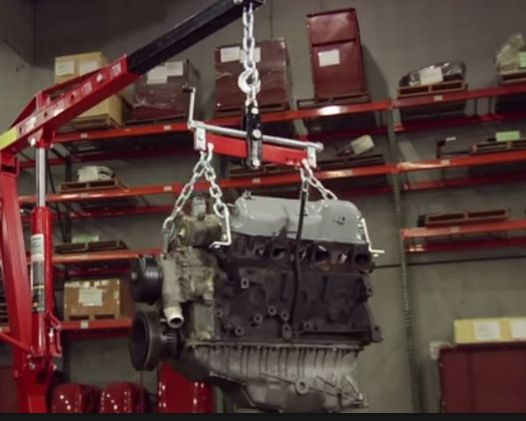 But it's not! Look at the size of this engine and gearbox on the crane: 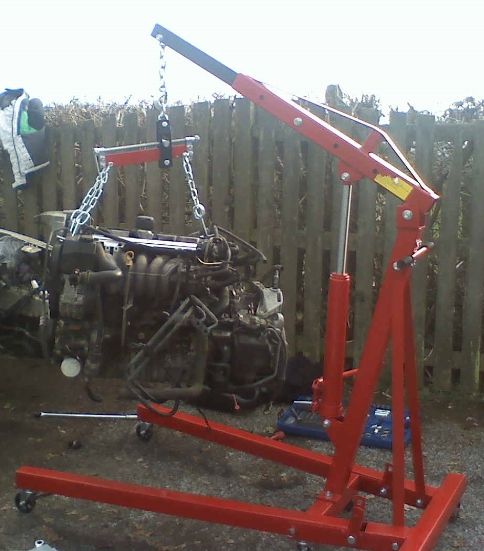 If you look at these further pictures, there is no clear place to really attach the chains to. This first pic does have a suitable engine mount bolted to the block... and without doubt the bolts would be strong enough (even though they're too long without the rest of the mount): 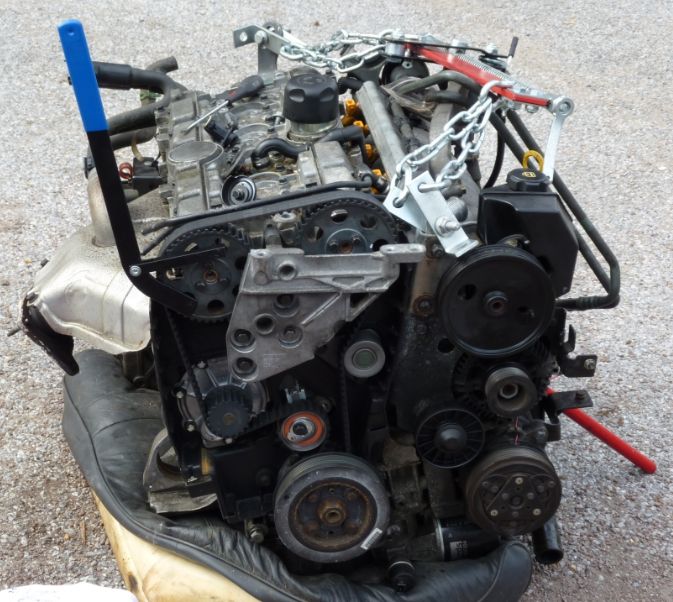 But it's this end that needs the extra support or the autobox sinks it... and there is nothing but one loop to attach the chains to: 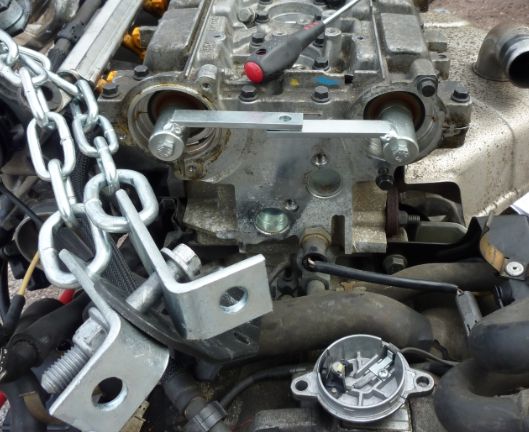 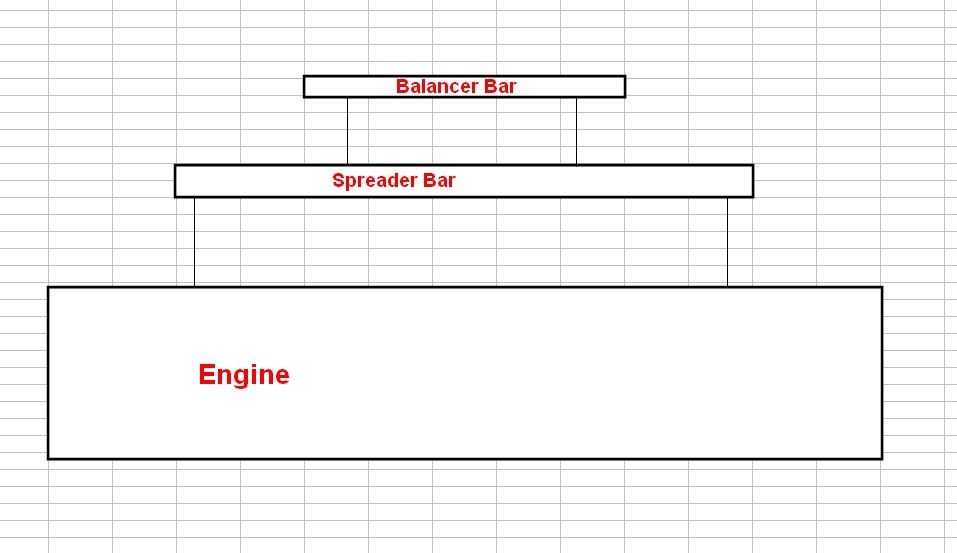 Thanks for the response and photographs which make it clearer to me what the problem is.

You have your work cut out sorting that engine.

Just out of curiosity exactly what Volvo engine have you got there ? Looks more like a truck engine than a car engine.

We are born into history and history is born into us.
Message 15 of 21
(696 Views)
Reply
0 Thanks
Topic Options