Gary Baker, a father of two from Baldock in Hertfordshire, had left his 2006 Navara with a local garage for its MoT on Monday, March 20 when he got the call from the mechanic.

Baker told Driving.co.uk: “The guy called me up and said, ‘I’ve done the MoT and it needs a bit of work on the brakes but I’m not going to bother with that because the chassis has snapped. The brakes are the least of your problems.’ 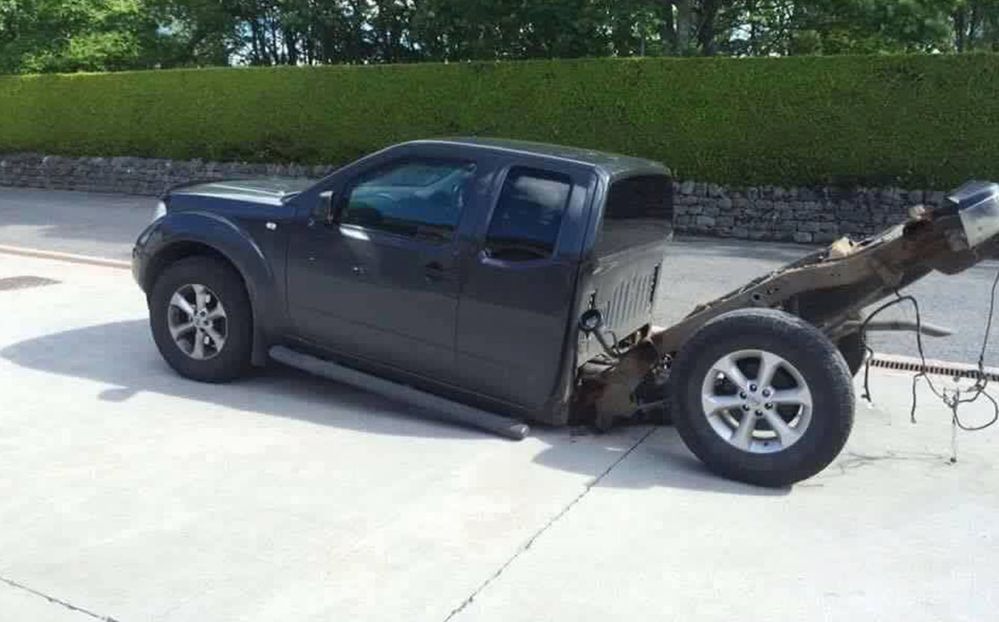 Well known issue with the Navara, plenty of reports in the press over the issue.

one thing i would say is that if it snapped due to excessive corrosion (which appears to be the reason for the others), then why wasn't that spotted at the previous MOT?

excessive corrosion causing a snap wouldn't occur in just 12 months.
there would have been signs of it 12 months previously and for the MOT inspector to not notice that would seem unlikely (assuming he/she was doing their job properly).
Message 3 of 23
(1,261 Views)
Reply
0 Thanks

because it apparently corrodes from the inside of the box section

yes but for it to snap i would expect to see some visible evidence a mere 12 months before a complete failure of the structure. maybe not a lot, but still something that a decent MOT inspector would/should pick up on.

after all, an MOT inspection is supposed to check the road worthiness of the vehicle, and that includes a reasonably thorough inspection of the chassis.

i wonder if it was the same garage that did the previous years MOT.

Had the same issue with 2CV and almost impossible to spot without some serious inspection because as @Oldjim quite rightly pointed out these things corrode from the inside.

Some of these motors are rusted from day one. Many moons back and doing some work in Ellesmere Port we would see red rusted Vauxhall Viva body shells being brought in from outside 'storage' straight on into the paint shop. No wonder they rotted from the inside a couple of years later.


Had the same issue with 2CV and almost impossible to spot without some serious inspection because as @Oldjim quite rightly pointed out these things corrode from the inside.

Indeed, having pulled apart a 2CV with a collapsed chassis myself, the 2CV chassis, particularly the poorly put together Portuguese models where galvanising was just too hard and paint-dipping was good enough even with obvious untreated areas, would rot from the inside out just under the bulkhead (usually water getting in through other rusted-out parts thanks to rubbish paintwork by the terrible factory they had), and it got inside the rails and rusted from inside to out, no visible, external signs until it starts to bend (ripples in the metalwork and either the front end sagging forwards or bending downwards like a banana in the middle) or break from the lack of internal structure, and the same thing is happening with these Navaras, you'd think Nissan would have known to protect against this issue...

Yep, one of my 2CV's had a new galvanised chassis fitted. Expensive at the time and only worth it because of the affection I had for that particular one which was a French made left hand drive. I seem to recall some had wax injected into them?

Yeah, there's the "Waxoyl" treatment which is applied inside and out of the painted chassis (something Nissan should take note of), though there are many aftermarket ways of protecting a chassis with various oils and waxes and paints, one fella I watch on youtube sprays the underside of his vehicles with chainsaw oil (very thick and sticky stuff) before winter sets in...

I know of a vehicle mechanic who sprayed the underside of his car with old engine oil every year.

One of my Land Rover sprat moments?, or just “unlucky”

The winch event I’m organising looms close, very close, Sunday to be precise, and I have been burning the midnight oil to get things sorted on the 90 V8 as I am COC….

The new 12,000 Hydraulic Winch is working (a tale in itself) the cage is 90% done (all the inside tight to the bodywork done as per earlier post), radio is in (ta Jon), ARB lockers work, cubby box fitted (CB going in it), and loads of other work has been done……..

I really wanted to get some of this into the chassis before I started using it, so tonight was planned to be the night for Waxoyling the inside of the chassis….

I had gone to Halfords and bought 2 gallons, and knocked off work early…

I also had the real benefit of Sue (SWMBO) was out tonight, so I had since 3.00pm been shoving the 2 gallon cans into the sink with near boiling water…….

I should have known things were going to go “slightly wrong” when I started….

I decided to use John's Waxoyl gun, and my compressor, I had the propane burner on in the workshop since 3.00pm flat out and it was like the sahara, in fact it was so hot I decided a T shirt and shorts was the dress code………

Thhhhuuuumpppppppp !…great big snotty dollop spewed out over the kitchen work surface........, no probs I thought, I’ll sort that out when I’ve finished as I might make "a little bit more mess yet", .....glad Sues not in….

Clutching bloody hot Waxoyl injector thingy, part filled with Waxoyl and mixed with very very warm white spirit I squirted and soaked the chassis blasting away, and also practising holding my breath .....as it went misty in the workshop….

1 Gallon later I was nearly there, I was at the rear cross member, with yet another huge refill…….

I ought to point out that I had also decided that at some of the angles I was at pulling and holding the trigger was a pain in the butt...( I have a really bad back) so I had devised a cunning lock of an elastic band on the trigger so that I could let it do it things whilst it sprayed away……

Shove tube into hole and pull trigger….lock and waggle etc…

Enter my wife’s love of her life…..

It sat there and looked at me the way only a cat can….it sniffed (disapprovingly) the dripped Waxoyl, and I said…

“Huh, you don’t want to be in here matey, this stuff will stick to your fur like [-Censored-] to a blanket”……And at that very point the jammed on tube extension came off the gun…

Could I release the elastic band round the trigger ?…

The gun squirted warm Waxoyl / white spirit out at a force never so far experienced, one particularly good jet hit the cat, who bolted, knocking over the 2/3 empty (1/3 full) can of hot Waxoyl / white spirit mix, which flowed oh so well under the landy, and into my T shirt, shorts and skin areas exposed..., but I was still fighting with the hot octopus trying to switch the damned thing off, but I failed. I was saved when it finally ran out…..

Just when I thought nothing could get worse than lying under a Land Rover with Waxoyl soaked clothes, Waxoyl dripping onto my hair and face, and running into my ears….

Some Waxoyl dripped onto the lead lamp….

Blackness as it also pinged the fuse for the lighting circuit. Getting myself out of the underneath of the landy proved fruitful in that I knew all the places that Waxoyl had “leaked” ……

Removing dripping clothes I entered house in “minimal clothes” to resolve fuse problem. When the lights went on I saw the cat…

I AM GOING TO DIE IF SHE SEES THIS !

This did not improve the sink / kitchen area 1 little jot, .....ever tried holding a 'Waxoyled cat' in a sink with water and rags, especially when cat does not enjoy it?….

1 hour later the cat was scrubbed and very pee'd off with me. I’ve had 2 baths and also cleaned the bath. It seems that the bath will not be rusty….scrubbed kitchen floor, sink and worktop.

Cat stinks, garage sticks, alley way stinks, I stink, kitchen smells of lemon washing up liquid, which strangely we seem to nearly be out of ?….floor stinks……

She will be back any minute…….

PS Unfortunately the Cat has now passed on, but he lived to a good age and certainly never went rusty.

Been a while since I saw that particular story...

As for the old engine oil trick, unfortunately, doing that gets you an MOT fail, as the tester will assume it's from the engine and given the excess of it, that the engine is in a bad way, so, automatic fail, even if you explain to them that it's just there for rustproofing, they still don't buy it...

It gained an MOT pass every year.

@Strat thanks for that story. i've had a rotten evening but reading that made me laugh so much it brought tears to my eyes! The bit about the light going out and taking the fuse with it was the icing on the cake that really cheered me up lol.

i'm still laughing at the thought of it all now! (poor s*d!)

As I understand it... an M.O.T. inspection result, is only valid for the day it was done ?

Remember it well, not sure if I got more of the stuff on my clothes and the driveway rather than my car.

I don't suffer from joint pain so perhaps it was good at oiling them as well.