Is it just around where we are, or have others noticed an increase in the amount of rubbish being thrown out of cars, and energy drink cans being discarded (as I suspect) by the increased numbers of runners and walkers.

It's got beyond a joke. Never used to chuck out the trash from our cars and sure much less is biodegradable so we see more and it hangs around like forever, but have cars become to posh to pollute so out of the window it goes?

Next week our little community is doing a social distanced of course organized 'Wombleswanted' litter picking walk - so fingers crossed for a half dry day at least.

No sure if you can actually class it as litter but will your group also be removing those little plastic bags you see hanging from the trees and bushes.

Yuk, but I suppose so although those are nearly always seen on off road woodland type walks.

Why do they do that? I've absolutely no idea.


Don't limit the friends you haven't met with arguments you'll never have.
Message 3 of 16
(414 Views)
Reply
0 Thanks

@Minivanman Not just your neck of the woods. Pretty bad in Lincolnshire too. Not too certain of the cause as most seems to be plastic / bags that look like they have been blown from a landfill site.

One thing noticeable is the amount of discarded KFC / McD bags. I've never quite understood how the lanes around these parts get them as the nearest takeaway is some 12 miles away. Maybe time for a takeaway tax. It won't stop the litter but maybe they can employ more staff to clear it up. I've also seen an increase of volunteers picking the waste up but whether that's a good idea of not, not too certain. I know every little helps but it doesn't really educate the people dumping it in the first place.

And now the school, a few hundred yards up the road, has restarted I'm picking up discarded face masks every other day.

I get that, but the Council is not out there picking up as is their responsibility, and those that make the mess are not going to pick if up either so it just leaves the community or schools to perhaps lead by example and hope that others are educated at least in part. But then pigs might fly.

As for those McD bags and such I have actually been in a one of their car parks and seen it chucked out of the window when the vehicle was right next to the bin and probably by the same sort of people that when eating inside leave just their rubbish on the table and walk away.

What a rotten species we are at times.


Don't limit the friends you haven't met with arguments you'll never have.
Message 6 of 16
(339 Views)
Reply
0 Thanks

I have friends who at least twice a week when they go walking collect the discarded rubbish, they regularly go back with 6 or more carrier bags full and that can happen on a walk they did a few days before.

No idea why anyone feels the need to chuck rubbish out of car window. Make 'em do 5yrs litter picking if caught!

There is a group of people in this borough trying to make the area a little more pleasant by litter picking on a voluntary basis but they can't be expected to do the job we pay the council to do.

Like some of you, I've seen people throwing take-away containers and left-over food out of car windows.  The local High Street has a large number of pizza and chicken outlets and early Sunday mornings the entire street looks like a rubbish tip.  I bet the same people complain of the state of the street and the vermin it attracts.

I see people on an almost daily basis dropping litter when there is a bin nearby.  In the days of paper tickets I saw a woman get off the bus with her ticket in her right hand but the bin on the pavement was on the left so she just dropped the ticket on the pavement.  There was also a bin by the door on the bus clearly marked "Used Tickets" which she could have used.  A few days ago the person walking in front of me stubbed out her cigarette on the area provided for that purpose on top of a street bin but instead of then depositing the cigarette butt in the bin, she just dropped it on the pavement.

Old habits die hard for some people. Remember when having bought cigarettes and walking away from the shop, people would always but always unwrapped that cellophane or remove that bit of silver paper and chuck it on the ground. Ciggies were then always just squashed underfoot and car ashtrays were always tipped out into the gutter.

Apart from the usual, this is what we are having to put up with at the moment where someone as yet unknown is going to the trouble of sticking his or her energy cans in tree branches. What point at they trying to make? 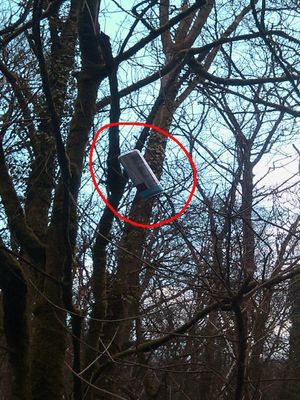 On one half mile stretch alone there must be at least twenty cans stuck in the trees and bushes like this on both sides of the road. Hopefully after our Saturday cleanup they will take the hint - or will they make an extra effort to replace them?

Seems to me like days old and the village idiot - only this one is probably wearing a track suit.


Don't limit the friends you haven't met with arguments you'll never have.
Message 10 of 16
(244 Views)
Reply
0 Thanks

Ignorant slobs, the lot of them, @Minivanman  and sadly the clean-up will be a waste of time - you can't educate the brain-dead.

Hard to believe people throwing cans in trees like that. I could understand runners dropping cans beside the path to pick up on the way back, maybe forgetting a few, but up a tree.

And how did they throw the red string up there like that?😀

But they are not being thrown, they are actually being stuck on the top of branches - and not all of them are that easy to reach either.

The mind boggles, and as I have never seen anybody doing it (because trust me I would have something to say to them) I suspect it's some early morning 'up at the crack of dawn' joggers.


Don't limit the friends you haven't met with arguments you'll never have.
Message 13 of 16
(204 Views)
Reply
0 Thanks

Yesterday I went for a walk and happened to pass a 'dog poo bin' where some dog owners drop their dog's poo wrapped in a plastic bag.

Surrounding the bin were 4 clear plastic sacks full of the remnants of a party such as Pizza boxes and drinks cans.

Quite a party I thought.

100 yards down the path I came to another dog poo bin with 4 more clear plastic sacks full as above.

This party's getting bigger.

100 yards further and the same again.

I was a quarter of a mile from home but wondered why I hadn't heard this party which must have been a big one.

It was a large amount of dumped rubbish but at least the dumpers had packaged it well for disposal.

@Minivanman, maybe there is a Welsh version of Bigfoot about.