Is your Alexa listening?

Is your Alexa listening?

Think I read somewhere recently that Google’s Nest Secure home security and alarm system had a hidden microphone and that they 'forget' to tell people. I don't have anything like it m'self, but the daughter has one that just for starters turns the lights on and off. "What the heck is so difficult about just using the light switch" I asked but no, both her and hubby are sold on these sort of gadgets.

Has anyone here invited Big Brother into their home? 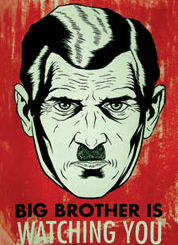 He might not be watching, but he'll certainly be listening it seems.

Yes I read that article too as they'd said the latest release of the OS would allow it to be voice controlled, so I guess that would have raised a question mark or two about some users' heads.

Initially I had reservations about these devices but then I relented and bought some Echo Dots. My son uses one on a daily basis for timers, reminders, news and radio while the other two were off and collecting dust until recently. Amazon were offering offering their own Smart Plug with a huge discount of £15 so I thought why not, I managed to get two, getting both for less than the price one, as I simply wouldn’t have paid the original asking price.

I dusted down one of the dots and with the smart plug plugged in and configured I too can now turn my lamp and air purifier on and off simply by asking.  But due to the degree of paranoia I still have I mute the microphones on them when idle, but as the dot's on the table next to me it is easier to turn the mics on, issue the command and turn them off again than it is walk across the room to turn either the lamp or purifier on.

I do think they have their place and they must be useful for someone with limited mobility and or dexterity. But to be honest I still don’t trust it (Or their ilk) 100%, never have and I doubt if I ever will.

Edit:- If anyone is interested when I bought the devices above I used a discount code of SMARTPLUG at the checkout, but I don't know if this will still work.

We have 3 in our house. I hate them with a passion. It is obvious they are always listening because sometimes they are activated by any old word it hears. I came into the lounge last night to hear it talking about wild, domesticated goats. [-Censored-]?? They also store all the stuff you say to it, there is a online app you can use to delete it, but you can only do it one instruction at a time!! I turned off the Google Assistant on my phone and other devices when I realised just how much stuff it was gathering.

Well come 4pm or just after I'll have my feet up for the Wales v England Six Nations. All I need to do then is say "beer" and the Mrs not only hears me, she gets it as well!

Compare yourself to who you were yesterday, not who somebody else is today
Message 4 of 23
(981 Views)
Reply
3 Thanks
3 users liked/thanked this post: Marksfish, Strat, Nibiru.

Is Mrs. Minivanman called Alexa too?

I have an Amazon echo. I bought it so I could get a reply when I asked a woman anything. 🤪🤪
Message 6 of 23
(946 Views)
Reply
1 Thank
1 user liked/thanked this post: Minivanman.


They also store all the stuff you say to it, there is a online app you can use to delete it, but you can only do it one instruction at a time!!

If you go into your Alexa account and navigate to Alexa Privacy/Review Your History/Review Your Voice History you have the option to either clear all recordings with a single click or use tick boxes to select which you wish to delete, again in one single click.

I agree that there is a lot being captured, personally I keep ours switched off or muted unless they are in use.

I mean quite a while ago you could buy numerous remote control units that you could plug in to control whatever took your fancy with a simple quick press of your master remote.

I find it funny that that never really caught on and yet the long winded approach of speaking a command has.

I expect a psychiatrist would say it's the attraction of some sort of master and slave thing.

Whenever something like Alexa or other automatic systems for the house are mentioned I can't help thinking of Frank Spencer;

I find it funny that that never really caught on and yet the long winded approach of speaking a command has.

I expect a psychiatrist would say it's the attraction of some sort of master and slave thing.

People seem to think that they are only used for home automation. Mine are used for streaming music, doing calculations in the kitchen such as converting lbs and oz into grams, checking on the weather and such general knowledge questions, etc.

None of these are a long winded way of getting a task done.

But apart from the home automation there is even less point.

I have a radio that gives me the weather forecast and news as well as music and my kitchen scales convert oz's to grams instantly.

That’s a fair comment @billnotben but you try asking your radio or scales how to make a Victoria Sponge or Cajun Chicken!

I'm fairly up to speed with a lot of gadgets but I tend to think like @billnotben. I just can't see the attraction for things like the Echo etc at all. It's a bit like the recent BBC item on hand implants, soon you'll be just like your cat or dog. Micro chipped. You have a name? Nah, just a number.

And the end result, why bother with a static Alexa when you can have an implant going around with you. Even more convenient. Keeping an eye on you as well. Sounds more like mission creep to me. I find it funny that those in the security services, blank off both microphones and cameras on their devices. Wonder why............

@idonno have you or indeed @billnotben physically used or experienced these devices for yourselves? If not then maybe your point of view might change once you have experienced them.

Consider the advantage a device like this has to a blind or partially sighted individual for example, it can read books, play music, turn devices on and off all through simple voice commands. It may come in the future with more automation such as face recognition and linked to their doorbell the user could ask “Alexa, who is at the door?” to which she might reply “It’s Betty” or “I do not know, would you like me the ask them?” The potential going forward is quite exciting for this and the next generations.

Equally it could be argued why does an able bodied person need one when they are capable of doing these tasks themselves, I guess the only answers I can provide to that question would be convenience or laziness.


Equally it could be argued why does an able bodied person need one when they are capable of doing these tasks themselves, I guess the only answers I can provide to that question would be convenience or laziness.

I can only agree .... with both sides of the er discussion