First time for everything even at my age with a strong hint from a friend of ours that they would like a dining room table back which they gave to us five years and three homes ago.

They had no room for it in their new place so we gave them our our slightly smaller one in exchange although to be honest, we did get the best part of the deal even though I had to strip, sand it down and give it a couple of coats of danish oil. Methinks they were a bit miffed at how nice it turned out.

Are they going to get it back? Over my dead body!

not sure that's an appropriate title..
Customer / Moderator
If it helped click the thumb
If it fixed it click 'This fixed my problem'
Message 2 of 16
(551 Views)
Reply
2 Thanks
2 users liked/thanked this post: nozzer, jaread83.

At my time of life and with all the other age related things I have to contend with, do I care? Not really, although I accept that some of you guys need to moderate about something.

How about 'native American', or are you objecting to use of the word 'Indian'?

I'm now starting to remember one of the reasons I have had such a long holiday from this forum. Some things it seems never change, and certainly not in this new world of progressive liberalism.


Don't limit the friends you haven't met with arguments you'll never have.
Message 3 of 16
(538 Views)
Reply
0 Thanks

I presumed the thread title referred to something i'd never heard of that was a known name for dodgy swaps? I dunno.

Anyway back on topic plot..

I suppose there's two ways to look at it. 1) it doesn't hurt to politely ask about the possibility and 2) Bloody cheek!

I tend to side with number two myself although recently I did think about asking someone if I could grab a PSU back off them that I gave them ages ago. I say think because I never did so. In the end I ordered a part from ebay for a tenner which will work with a DC transformer I found in the garage that supplies 10A.

I've heard of people asking for things back before that they've given away and it always seems to lead to bad feelings. They get offended if they're told no, the recipient gets offended that they've been asked. It's like the giver seems to think that they can loan it until a convenient time and then take it back at will. There's self storage out there for that kinda thing.

The only exception (if that's what it is) is if we have been given something, then before I sell it/get rid of it/pass it on, will offer it back if I can to the person that gave it to us in the first place.

We recently gave a rather nice oak stand to one of our daughters, but not before offering it back to my younger brother who gave it to us twenty years ago on leaving the UK but has now retired back home.

Just a thought, but as an Englishman long living in Wales, dare I ever say "Welsh/Welch on a deal" - or will Rebecca get on her high horse again.

I'm guessing we are still OK with using the term Dutch auction.

Don't limit the friends you haven't met with arguments you'll never have.
Message 5 of 16
(500 Views)
Reply
0 Thanks

As, according to political correctness, there is no such thing as an Indian anymore there can be no one to offend.

So what do you call a native/national of India?

I was wondering that too.

Sadly and as it happens, I think my family are a bunch of racists.

I started dating an Indian girl recently, so I decided to bring her home to meet the family. The kids wouldn't talk to her and my wife told me to pack my bags and leave.


call a native/national of India?

Funny you should ask. Maybe things are different where you are.

As a kid some of my friends were referred to as coming from India. We never called them Indians.

As in that era it would confuse them with what at the time were the red sort.

I still don't, maybe in other places they do.


what do you call a native/national of India?

As a kid some friends were referred to as coming from India. Never as Indians.

As at the time it would confuse them with the other sort.

Learned behaviour in my book because as a kid I was not even aware of that distinction.

Brought up in a children's home (parents came to claim me when I was about ten) truthfully I had absolutely no memory of either brown or black children there with us, but a year or so ago - and all because of family research, internet and social media - a photograph taken from my time there was sent to me and amazingly it shows we were quite a mixture.

Dress code by the way must have been because of some local fete or something!

I'm in the picture of course, but you'll have to guess which one sorry. 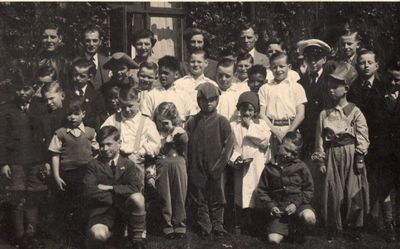 Don't limit the friends you haven't met with arguments you'll never have.
Message 12 of 16
(383 Views)
Reply
0 Thanks

I expect you're the budding Captain of industry.

I was not 'going Dutch' either

Don't limit the friends you haven't met with arguments you'll never have.
Message 14 of 16
(355 Views)
Reply
0 Thanks

My vote is for the boy with his eyes closed to the right of the boy with the Captain’s hat on and behind the junior version of MC Hammer!