Sometimes we can be so focused on one topic that we may be almost unaware of another topic..illicit drug abuse...that may be more of a greater threat than the one beginning with B. or C (Climate change)and D is the major one.

Accoding to www.gov.com website (10th September) 1 in 10 Adults have used illicit drugs in the last year.

The National crime agency gives details about country lines where children and vulnerable adults are  forced to move drugs from the main cities to the country, including some who may not even be in their teens and if caught the main dealers miles away cannot be charged by the law due to lack of sufficient evidence

The link between crime to pay for drugs is well established as is the problems caused by addiction to drugs which not only affects those directly involved but also affects their families along with innocent victims who may get robbed or attacked.

Based on past and current figures illicit drug taking is on the increase and no one seems to have any answers how to stop it, the Police have reached such a point that some senior officers are even calling for certain drugs to be made legal as some countries have already done.

imo this is a ticking time bomb that will affect us all in some way or another yet it seems way down the things requiring urgent action.

Any thoughts on this ?

Legalise, tax and control in much the same way as they do with cigs and booze.

Less time being chased by coppers, more time for coppers to spend chasing crime that surprise surprise has been reduced by having legalised those drugs.

Yeah.... daft as it may seem..... they legalised baccy and booze, and the smugglers went out of business... going legit, they probably started their own "import/export " companies, and paid the government taxes en masse  ! !

Somehow,... can`t see the local drug dealers being impressed with going legit, though... can you

Well they would be out of business that's for sure.


Don't limit the friends you haven't met with arguments you'll never have.
Message 4 of 16
(532 Views)
Reply
0 Thanks


Legalise, tax and control in much the same way as they do with cigs and booze.

Less time being chased by coppers, more time for coppers to spend chasing crime that surprise surprise has been reduced by having legalised those drugs.

Every time, and for an example of what happened in the past, you only have to look at what a roaring success prohibition was in the States.

At least for the criminal fraternity.

No difference between a drug that you happen to drink, and one that you take any other way either.

Indeed, and lets face it, it will not be the first time the British government had profited from the drugs trade by dealing in opium from India and flogging it in China! 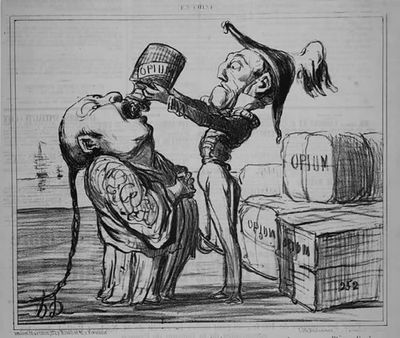 Don't limit the friends you haven't met with arguments you'll never have.
Message 6 of 16
(519 Views)
Reply
0 Thanks

And it's not as banning any of these things has ever had the slightest effect on people taking it.

Those who want it will get it.

It cost millions if not billions to attempt to stop an illicit trade which still apparently flourishes.

However, whatever one's political stance might be, there's little profit for political parties in legalising drugs.

"Strong on drugs" etc. etc. is likely to be a bigger vote winner than repealing the drug laws.


Indeed, and lets face it, it will not be the first time the British government had profited from the drugs trade by dealing in opium from India and flogging it in China!

The Government didn’t profit from the drugs trade by dealing in Opium, the money came from taxation of the private Companies doing the dealings.

Problem is with our society we take a moralistic approach ( thou shalt not ) approach to drugs instead of a pragmatic one - the result is that criminals get rich and the taxpayer has to pay up for the police to keep chasing them, so the police are not available to solve and prevent crimes that really matter to taxpayers ( I mean to say, who really cares if some idiot dies from the result of taking illegal drugs of totally unknown purity and toxicity - I certainly don't ).  Legalise them and collect taxes -  the drugs will be of a controlled quality and if silly burgers still want to take them they won't die immediately from a bad pill but will die more slowly from the affect of having their brains ( if they have any ) and vital organs, disabled by the effects - but at least their taxes paid on drugs will help fund their treatment....

Legal or not the NHS will still have to deal with the aftermath, that won't change.

Looking at the posts on the forum are you sure it's just one in ten?

As sometimes I read a post and think - they must be on drugs.


As sometimes I read a post and think - they must be on drugs.

Well, I am on Venlafaxine, oh, wait, that's a prescription drug, never mind, carry on!!!

That's a moot point there, as tax from the East India Company which was the British government in all but name was profit, for what else is taxation. If you want to disengage from the wealth that this country obtained by some rather dubious trade around the world in the 18th and 19th century then fine, but if not have a litlle read if you have time.

Nice piece here and lots more out there of course.


Don't limit the friends you haven't met with arguments you'll never have.
Message 12 of 16
(430 Views)
Reply
0 Thanks

@Minivanman I am aware of the Anglo-Chinese conflicts having worked for a Company for over 20 yrs, the Company that started the Opium War.

Well there you go then.

Don't limit the friends you haven't met with arguments you'll never have.
Message 14 of 16
(397 Views)
Reply
0 Thanks

A previous time when the Government was actively involved in free trade.

If an agreement couldn't be reached there was a fleet of warships anchored offshore....