Recently we seem to be seeing a spate of TV show revivals - not just as films but as adverts. Halifax have done top cat, flintstones, now Parker is dumping Lady Penelope after winning it big..

Whats next? What would you like to see revived?

Bananaman, hopefully not involved in any dodgy money-related scheme like the current revivals... 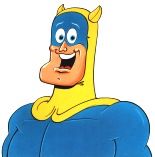 Pinky and the Brain would be more suitable for Halifax.

The suggested Bananaman would currently work well for Tesco.

Now what would be apt for plusnet.

@billnotben  any of the old British Rail adverts.... sutiably adapted..

I was thinking of Annie.

Roobarb and Custard anyone?

Not sure of the timeline here but maybe the advertisers are targeting those that were kids when many of these were aired and they are now established adults with money to spend or in the case of Halifax and the Thunderbirds advert, open an account with them.

Makes sense, sort of. I mean if they started to revive stuff from the 60s like The Twilight Zone or Wagon Train then they'd be trying to get money out folks that are retired or have more or less everything they need?

All rather nostalgic, but water of this old ducks back.

Compare yourself to who you were yesterday, not who somebody else is today
Message 7 of 26
(653 Views)
Reply
0 Thanks

Compare yourself to who you were yesterday, not who somebody else is today
Message 8 of 26
(651 Views)
Reply
0 Thanks

OK, @Minivanman, I think know I can beat that with the Wombles.

Nah, your bluffing mate, and a bad one at that.

Compare yourself to who you were yesterday, not who somebody else is today
Message 10 of 26
(607 Views)
Reply
0 Thanks

And if that doesn't do it then I'll have to bring out Bagpuss!


with the advances in TV production an effects

Of course Randall and Hopkirk has already been revived once. Still preferred the first effort.

But on "effects" that's what in my opinion is behind the production of so many duds.

I would rather watch a good old series with right clunker effects than a new effort with all the bangs and whistles, zero storyline, and the bottom of the rung actors (because all the budget went on effects).

Sort of on effects what the hell happened to the last Star Trek film?

I mean it just wasn't Star Trek. It should have been named Star Wars Episode whatever.

@billnotben, do you mean something like Prisoner Cell Block H, with is wobbly set and equally wobbly acting!

could equally apply to Blake's 7