A precedent has been set by Remainers who lost the EU referendum in refusing to accept the result and working actively against it.  This of course is because the democratic result was not the "right" one.

The general election will produce a result of some sort and on the basis of the previous three years is there now any requirement for this result to be accepted by those who feel that it has not produced the correct result and they have lost!  There are plenty of opportunities for legal challenges and other actions.

The genie is out of the bottle. A comment on the radio this morning was that the more the liberal left and dictatorial EU tell us what to think and what to do, the further the man in the street is pushed to the political right. The middle ground is gone for good.

Look at southern Ireland....twice they voted not to join the EU... so had to have a third vote until they got the answer right.

The positive voting had already started with the first reading of the Bill being accepted. That was the first time it had happened. I think the ball would have continued rolling with positive momentum.

There were that many amendments in the pipeline to attach to the 3rd reading,  and then the Lords would have their say that it was just seen as impossible by government to get the deal through intact,  also many labour rebels who voted with government for second reading apparently would not vote the same way for third.  There have been so many delaying tactics by sore loser remainers that Boris was minded that 'do-or-die' action was needed in the form of a fourth referendum ( in addition to June 2016 ref,  2017 GE and EU elections ) - can't say I blame him.  In the BBC link earlier Brexit was by far the most important thing for many voters ( almost 70% ) compared with about 30% considering NHS as most important...

Excusing anti-semitism is exactly what you were doing and if not that, then at the very least you were trying to dilute Labours.

Say he who's in a cozy little clique with a racist, some xenophobes/bigots, and isn't adverse to some bigotry himself on occasion...


Say he who's in a cozy little clique with a racist, some xenophobes/bigots, and isn't adverse to some bigotry himself on occasion...

Oh dear. You really do have a problem with people whose views do not align with your own.  Why not try relevant counter arguments rather that oblique personal abuse?

But do I have a a problem with racists? (and those that cozy up to them). Absolutely!!!

In an interview tonight Trump has said very clearly that the US does not see the NHS forming part of any trade negotiations. he certainly couldn't be clearer.

Where was the bigotry in my reply?

I am not intolerant to the views of others, exasperated perhaps but not intolerant... except when they attempt by diversion to defend the likes of Corbyn and all the other well documented anti-Semites in his Party.

I am not and never have accused @RobC of the same. [He] does however leap to the knee jerk conclusion that I did which is if I may say so, rather sad coming from posters like yourself who at the drop of a hat or even at the hint of a pro Brexit post accuse others of all sorts short of being a fully paid up members of the Brown Shirts.

Get a grip man, even the Jewish Labour Movement for the first time in its history, and a most senior rabbi said they will not campaign on behalf of the Labour party and have been urged to vote against them.

Are you one of those Scots (racists) who hate the English so much that you'd rather use the US spellings of certain words?  🙄

Had to smile at the irony of the 'not for sale' chants during Corbyn's speech to the the party faithful earlier in Manchester, and sounding just like Trump's lock 'em up ones.


Back on subject. It will be interesting to see what hapens with our constituancy as originally was staunch labour but a few elections ago Lib Dems won it and we had a very good MP who worked hard for the area. In the 2017 election mainly due to the student vote Labour won it back. In this one it with the students mainly back home will the Lib Dems win it back and will the Brexit party stand and the Conservitives stand aside as they always came a distant 3rd and give them a chance to win. The constituancy voted remain (about 68%) in the referendum so will probably be between Labour and Lib Dems but it will be intresting to see...You never Know!!! 😃

According to a report on BBC a lot of universities will still be sitting on 12th so your wish may not be granted. Check out when term ends.


In an interview tonight Trump has said very clearly that the US does not see the NHS forming part of any trade negotiations. he certainly couldn't be clearer.

Do you think that maybe why Corbyn objected to Trump's comments?🤔 Maybe Trump heard the chants from Battersea? 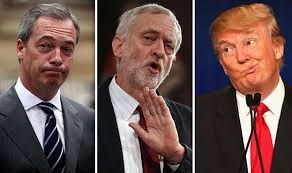 @artmo simester actually finishes on 13th...degrees will be awarded from the 12th.

Mr Corbyn claimed today that everyone would win under a Labour government.  The Reader's Digest (and others) have also run campaigns offering prizes to everyone, however the winners all got plastic bookmarks, except for one lucky person who received the £10,000 or whatever the top prize was.  So be careful about entering a lottery with a guaranteed prize unless you know what that prize is.

I fear Mr Trump's endorsement of Boris Johnson on Nigel Farage's radio show today may have a negative effect on the Conservative's (and Brexit party's?) chances.

As you are all aware the PotUS has once again broken protocol and stuck his beak in where it's not wanted, nor needed. Who does this man think he is! He would be the first to lambast anyone who he thought was speaking out of turn. But of course not everyone is DT so thank goodness for that.