If you didn't see tonights "24 hours in police custody" it was utterly gripping.

The crime reported is a man who has used a prostitute reporting that he is being blackmailed. The police swing into action and take it very seriously. The victim offers up the £1000 reward and put officers on the ground to remotely monitor the drop off point.

Nobody collects the money. Still investigating, they interview the prostitute and quickly rule her out of it. Something troubles the leading inspector on the case - where did the blackmailer obtain the victims details from in the first place? The police look into who can search for these things and who has.. and quickly find that one of their own officers in the serious crime unit looked up the victim just a few days before hand. Not only that, he has been monitoring the drop scene himself - policing his own crime!

When the internal investigations officer catches up with him he's seen sitting at a desk - the dailymail claiming this is where he was monitoring the scene from. EDIT: Having watched the arrest scene again it is identified in the program that they are going to the remote surveillance room to make an arrest - I didn't catch that part when i first watched it.

In an even weirder twist of fate, he had even featured on the program himself in a previous episode investigating another crime which the DM reports as being a blackmail case! His colleagues were astounded and there are scenes of the office gossips at work.

It was very gripping to watch. You can read last years BBC article about it here:

There is nothing worse than a bent copper!

Having said that there is nothing more sad than an intelligent and from all accounts a very competent copper who throws away a very promising career for £1000. He really must have been desperate, so what does that say about the Police Service where it appears the easiest option is to turn rogue than to go to your Governor and stay "Hey, I have a problem, and I need help."

I liked the bit at the end where the police appealed on the grounds the sentence was too lenient and as a result it was increased from 18 months to 3 years.

It's a shame all forces throughout the country are not as efficient at doing their job, in Cumbria we had the sad case of Poppy Worthington a child who died at the hands of a relative with the coroner actually naming the likely suspect but no action was taken due to total incompetence of the police involved in the case.


... so what does that say about the Police Service where it appears the easiest options is to turn rouge than to go to your Governor and stay "Hey, I have a problem, and I need help."

Perhaps that would be too embarrassing for him, either way he'd end up red-faced!


it appears the easiest options is to turn rouge

Oh no another one on the turn. 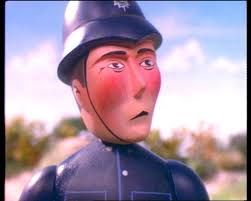 That's the excuse I "proffer" to use as well.

Must be the day for it. Just noticed this while looking at ebays forums.

Mook I suspect this would have led to demands for more than just £1k, he may well have tried to extort further monies from his victim(s?) after the initial successful payment.

Although it wasn't shown on the show his colleagues were apparently becoming suspicious of him as his behaviour had changed dramatically.

Daft thing is he'd just been given an award for his work on another case. Now he has lost everything. I disagree that the police can be held accountable for driving him to it, the police are paid very good money compared to most people.
I need a new signature... i'm bored of the old one!
Message 9 of 30
(3,730 Views)
Reply
0 Thanks

I liked the bit at the end where the police appealed on the grounds the sentence was too lenient and as a result it was increased from 18 months to 3 years.

The bit i liked was when the investigating officer had the victim back in and informed him that it was one of their own police officers that had blackmailed him. Can you imagine the huge weight that must have been lifted off his shoulders at that point? It must have been quite a surreal moment for him!

He may well have tried to continue his operation had he gotten away with the first attempt, but as there is no evidence this is nothing more than speculation.

To be fair I did not say the Police should be held accountable or that they drove him to it, all I raised were questions with regard to the internal politics and protocols of the Police Service that made him decided blackmail was his preferred option. None of us know what motivated him to do this but considering what he stupidly threw away he must have been desperate or down right greedy, in addition to being morally corrupt.

They found evidence of a finance agreement for a £6k loan - with £1.5k outstanding. No idea what else was going on his life - mortgage, credit cards etc - but for a police officer in a specialised role like his, £1.5k debt doesn't seem like a lot to worry about really does it.

Problem is that in a lot of public positions, any financial glitches (eg CCJs, bankruptcy etc) lead to automatic dismissal. It's simply not allowed. It does seem a bit harsh seeing as people can often be landed in nasty financial situations through no fault of their own.

Whatever his motive was what he did was a disgrace.


There is nothing worse than a bent copper!

You can'tget them in slot machines and most people will refuse bent coins.

@Anonymous  You don't seem to be the only one using auto-complete; the BBC text service reported that the Chinese New Year celebrations in London included a marital arts display!