I see a cooling tower has been demolished at Ferrybridge power station today I remember (in the 1970's) when I think two cooling towers at ferrybridge came down in high winds because of the formation of the towers. The towers were in two lines and as the wind hit the first line of towers the wind speed between the towers increased and brougt down the towers behind in the second row. It says all the towers will be demolished by October.

Anyone elese remember it happening.

Of course this was pre Global Warming

Just checked it was 1965 and three towers were blown down

Strange how each generation sees the structures of previous ones being demolished. With me it's those gas holders that started to come down, and for others before it would have been those factory chimneys.

What next I wonder, those tall office buildings and factories where people actually worked all day! 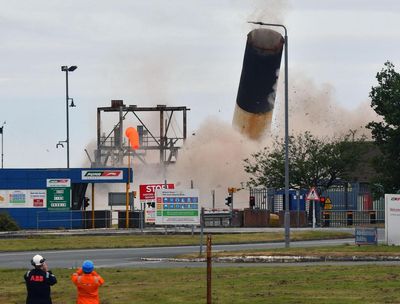 Chimneys at former refinery site at Milford Haven being demolished.


Don't limit the friends you haven't met with arguments you'll never have.
Message 3 of 7
(473 Views)
Reply
0 Thanks

I was working there in my early engineering days when that happened. The towers created a wind-resonance that was a result of wind direction and tower layout, which caused severe pressure variations between the towers. It wasn't so much the wind speed, more its direction and the tower layout, something which nobody was familiar with at the design stage.

@nozzer In the same gales a newly built church in Garforth collapsed and also at our house we had a corrugated steel garage that had no doors that was pushed of it clips and blown over an apple tree and green house into the back garden but amazingly there was a car in the garage that was not damged at all!!! Unbeleivable weather that day and no weather man warned us on tv about it

Vague recollection of it being in the news at the time.

I met a bloke once who said he knew the person who invented those spiral strakes that go up chimneys, which are apparently there to stop vibrations from the effects of the wind passing around it.

@Travius As it happened in 1965 unless youre over 60 you wont have done.