The new council tax bill just dropped through my letterbox. I opened it thinking wouldn't it be wonderful if the bill went down.

But that would be a fairy story instead the reality is a 6% rise. Of course a lot of emphasis is put on a max rise of 3% but the bill gets broken down with parts like adult care, police commissioner, blah blah blah all excused this.

So up it goes despite a considerably reduction in the services provided. Now how can I increase my meagre income by 6%?

No doubt more shops/businesses will close in the town centre and the council will wring their hands at the loss of business rates. Probably not even seeing the connection between consumers having less money to spend and their ever rising bills.

Bill payers have to live in the real world. Living within their means. Pity councils and the government didn't do the same.

That’s the Tory government for you. Will people never learn?

and they have decreased the support for low income families

Well they could start by paying Chief Executives a lot less. Here in Carmarthenshire, at £180,000 plus, ours earns more than the Prime Minister for heavens sake.

I'm lucky in that I do not have to pay any council tax as I'm on Pension Credit, but I am still the recipient of dwindling council services as a result (in our area at least) of £8 million being slashed off the budget.

It's a disgrace, I feel for those trying to pay their way, and get so angry when fat cat Councillor's tell us to tighten our belts whilst loosening theirs at those 'drop of a hat' food and booze functions. 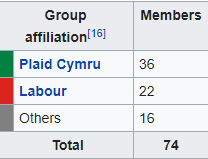 Don't get me started about police commissioners, IMO they were never really needed in the first place but Camoron wanted to spend money on his chums while telling the rest of us to suffer for the sake of austerity.

Remember Ann Barnes who "doesn't drive an £80k merc".. .who then appeared arriving at work in the next scene in just that?

But lets not forget those police commissioners also have an office full of staff so thats probably costing something like half a million a year to run plus the extra staff within the police forces themselves to deal with the commissioners office..

Anne Barnes herself said that her job didn't even have a job description. Most pathetically lazy people like that would at least go about creating one themselves to justify their own position and attempt to stick to it in the public eye but she couldn't even do that.

Switching away from PC's, our town centre is heavily expanding. They keep building new shopping centres / extensions which soon fill up with the usual boring chain stores that sell the same tat in every town but there is almost no unique stores where you can find anything different. Variety is the missing spice in this town. The smaller shops that used to exist keep closing down because the shopping lambs are drawn to the shopping centres. On top of that along with one being built and another leisure park under construction, this week saw the announcement of yet another retail complex outside of the town centre. The trouble is though that the town centre itself is not really a nice place to go to like it once was.

The police are barely heard from, do very little and don't even acknowledge (or record) troublesome neighbours. Our roads are falling apart, the local ring road is dug up / redesigned every year because they're never happy with it and yet the council claims to never have any money for anything. Hardly surprising really.

Due to that shortage of money the council cancelled our refuse collection last week in the snow, instead of paying overtime to clear it a few days later they decided just to carry on as normal and collect it all in another fortnight instead so everyone has bags of stinking trash building up which will take twice as long to clear anyway.

@billnotben  Fully agree with you exactly where do they expect the average person to find that kind of money.

Despite this rise the claim is they are also millions in debt so what increases are we likely to see in future years ?

Many councils claim it's due to a reduction in the amount they get from central government so do all councils get the same percentage and if not how is the figure arrived at ?

I understand if councils fail to run services correctly due to shortage of money then the government will step in and run the council although I am not sure how that would work in practice ? Might be one way forward though if it means council tax is kept at 3% or lower.

Whilst all Councils here in Wales are increasing this tax, Pembrokeshire council our next door neighbour tops them all with a whopping 12.5% council tax rise for 2018-19.

Somebody was taking the piddle obviously.


Don't limit the friends you haven't met with arguments you'll never have.
Message 7 of 45
(856 Views)
Reply
2 Thanks
2 users liked/thanked this post: 7up, rongtw.

Yes they are a right shower with us providing the jollies.

Councils should be known for all the good value services they provide. All mine is known for is farming out services to private contractors and throwing millions at Icelandic banks. Amateurish at best, criminally incompetent at worse.

Someone really needs to remind counselor's & politicians that they are public SERVANTS, not MASTERS.
This scandal and that scandal wrt them is just the tip of the iceberg.
Not got our tax bill yet, but it will be higher here to pay for the tapestry that NO ONE WANTS.
Message 9 of 45
(818 Views)
Reply
1 Thank
1 user liked/thanked this post: rongtw.

Indeed, and if Councils (or central government for that matter) are farming out services to private contractors, then what are they for and more importantly, what use are they?

Current philosophy in this regard can be traced back to that PFI wheeze introduced by John Major, slammed by Labour, but then embraced by Gordon Brown as it allowed him to use money to invest in hospitals and schools. Perverted populism if ever there was, which brings us back to the inescapable fact that essential service should remain under the control either wholly or in part by our government and not be owned by markets, or for profits for the powerful and insidious few.

Governments may play these mixed market economy games and get it wrong but how rotten, corrupt and self serving it becomes when our own Councils play them at our expense. So sorry, the free market does not provide. Uncontrolled and unsupervised it shakes us down for every penny and pound it can get under increasingly complicated contracts.


Don't limit the friends you haven't met with arguments you'll never have.
Message 10 of 45
(800 Views)
Reply
0 Thanks

We've had no increase in local council tax for a number of years in this borough, but the amount charged with the council tax for the Mayor and London Assembly has gone up.

We have local elections in May, but I doubt there will be any change in this borough.

MP,s or Councilors are all just in the Job to fill their own pockets

Despite what they say , they all say what they think we want to hear to get elected

Our council tax has gone up by 5%, the council moaning about cuts, spending pointless millions on building new offices and sat on reserves of £100 million.
Stupid.
Customer / Moderator
If it helped click the thumb
If it fixed it click 'This fixed my problem'
Message 13 of 45
(728 Views)
Reply
2 Thanks
2 users liked/thanked this post: rongtw, 7up.

Funny how council employees get suspended on full pay yet if there are suspicions about your DWP benefits then the shutters come down and you are left with zilch until it's sorted.


Don't limit the friends you haven't met with arguments you'll never have.
Message 15 of 45
(708 Views)
Reply
2 Thanks
2 users liked/thanked this post: 7up, rongtw.
Topic Options