I probably mentioned here before that I've been doing my own ears for many years (I'm a poet and didn't know it).

A few drops of warm olive oil in the offending ear the night before then a whoosh out using warm water with the rubber bulb that I use. Maybe once every one or two years at most if needed. I understand that if you do it too much your ears will go into overdrive on wax production.

I had it done once at my local surgery, never again. A pump effort shoved in your ear using cold water and no idea when to stop. When you do it yourself, if you have a lot of wax build up, you know and clearly feel the final whoosh.

Got the olive oil.

Checked out a private 'hearing specialist' establishment earlier and one that syringes ears. They quoted me £55 for one ear, £75 for two.


Don't limit the friends you haven't met with arguments you'll never have.
Message 17 of 33
(402 Views)
Reply
0 Thanks

I wonder whether the RNID would be interested to know that it's difficult to get treatment for deafness, whatever the cause.  The NHS is supposed to be about prevention as much as cure, and in the case of hearing loss, once it's gone you rarely get it back.

@Minivanman "we cannot get a simple job like this done on the NHS, yet ask about gender reassignment and have your willy chopped off no problem."

As I mentioned on here a couple of years ago, I have preservative-free saline eye drops for dry eyes, and at times it's been difficult to get hold of them.  E.g. I used to get 100 doses at a time but last summer this was cut to 40 without warning.  As I said to the pharmacist once, "If I were a heroin addict who'd never worked or contributed to society in any way, every agency known to man would be bending over backwards to 'help' me but having worked for 49 years and contributed huge amounts in taxes I can't be afforded a few millilitres of salty water."

If you have a

Got the olive oil.

Yes you have to watch out what you poke in your ears. I remember my dear old Mum saying that Granny was probably a bit deaf because she was always poking knitting needles in her ears.

I remember talking to my doctor many years ago about the olive oil ear business and he said that's the best. At the time there was lots of ads for a product called, I think, Earex. From what I was told it was good stuff in dissolving the ear wax but a common problem was the wax often re-solidified into an even larger jammed in lump.

One thing I did get from the doctor was a prescription for a small olive oil dispenser for the ear so...

Been mulling over getting either one of those rubber ball squirty things (how do you keep them clean?) or one of those syringes. Cheap enough both, and much less than that fifty five quid quoted.

It does strike me as being muddled provision. What a world we now live in where the NHS provides for social wants rather than medical needs.


Don't limit the friends you haven't met with arguments you'll never have.
Message 21 of 33
(358 Views)
Reply
2 Thanks
2 users liked/thanked this post: 7up, RobPN.

You can buy all you need online at the  likes of Amazon, they have complete kits for wax removal at a fraction of the cost  quoted by @Minivanman

This search will find what you need.


This search will find what you need. 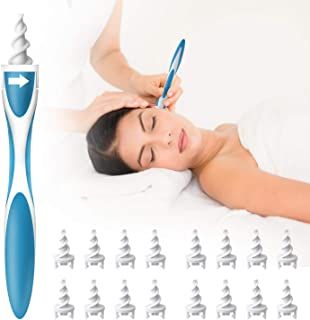 That looks quite tortuous, see that I did there.

I had a telephone consultation yesterday with an ENT surgeon from my local hospital. I had asked him to contact me as my ears needed de-waxing.

He has agreed to see me at the hospital in the next few weeks to micro-suction the ears for me.

No problem at all in arranging this.

Which is all fine and good, but unless your 'gatekeeper' GP refers you to your hospitals ENT....

I could go back of course and ask again but that would involve another elongated phone call to my local medical centre as I jump through those automatic question and answer sessions before a human being deems I am suitable to talk to, followed by as with last time, a two week wait for an available doctor to phone me in order to verify if a face to face appointment is really necessary.

What a palaver, really. 🙄


Don't limit the friends you haven't met with arguments you'll never have.
Message 26 of 33
(256 Views)
Reply
0 Thanks

I didn't go through my GP. I phoned the ENT dept and asked for someone to contact me. I was told I would get a call at 10.30am. My phoned rang at 10.20 and you know the rest from there.

You seem to have a particularly bad GP practice. Is this normal for NHS Wales?

Starting to sound normal, but I thought normal (or at least procedure) right across the NHS was to go through your doctor in order to get an appointment.

Was there a reason you phoned them direct?

Because the doctor I saw 'declined' to refer me to the ENT I phoned through to them myself and was told by the secretary taking the call that appointments had to come from the health centre... and just to be clear, you are doing this via the NHS and not 'going private'?


Don't limit the friends you haven't met with arguments you'll never have.
Message 28 of 33
(193 Views)
Reply
0 Thanks

No I am not using my private health insurance on this treatment. My eccess would mean me paying for it anyway.

I have dealt with the ENT department before so they accepted my request to see me again.  As simple as that.

Glad it was "as simple as that".

I've been dealing with my current ENT department for the last ten years and have my ENT records (I asked for all my hospital records) going right back to 1955 and a dose of Mumps. The rest is history.


Don't limit the friends you haven't met with arguments you'll never have.
Message 30 of 33
(164 Views)
Reply
0 Thanks
Topic Options