Diana Rigg has died.
I remember her in The Avengers and a Bond movie.

Oh bless, quite beautiful in her youth.

I didn't realise she was in Game of Thrones as I never watched it.

Latterly superb as Veronica, mother of Becky, played by her actual daughter Rachel Stirling, in Detectorists.

She was on All Creatures only last night.

Always Emma Peel to me as well, and that's showing my age I know.

A real class act indeed and in so many ways.

Excellent item on BBC News at 6

I am just sorry to hear anyone has passed away.

I wonder if I have seen her, I probably have in a film and not realised. 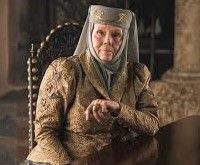 Heard about it quite a bit from my sister, I assume it is her favourite film. If I ask her, I'll will get the third degree about all of that film. Might have to get ear plugs when I next go round there (that's a joke for the PC Brigade).

To be honest, I don't really watch films anymore. Had enough drama in real life.

Funny as I was watching London's Burning. I remember that being filmed around Plumstead when I was doing my A Levels.

Great series that sort of unravelled towards the end and much like the book series. I think the author must have been under pressure to finish it as it did seem like a rush job. If nothing else now, worth it just see the number of well know faces that appeared in it!  As usual, the actor Sean Bean gets chopped up and killed early on. 😜

But I will always remember the leather cat suit.

Film - shows you how much I know, TV series I believe. I either had a few too many diet cokes last night, or light ales. I'll let all of you decide which one that was. Say no more 😆

My sister loves Lord Of the Rings, had to watch it in the cinema. I prefer to call it Bored Of the Rings. She won't like that comment, so I'll move on. Star Wars is another, but I can watch that. Thankfully she doesn't use these forums so I can get away with it - I think.

Didn't know about Bond, never really watched it that much.

I'd better not say how my sister tried to get me to watch game of thrones. 🤐