As Mum buys three hundred presents for her three kids.

Well I guess we better start a witch hunt against her then...

Or maybe not. Like she says, she's not on benefits, what she does with her money is her business.

Have to agree that it is nobody else's business but hers.

I have had words with my own daughter who spent hundreds on presents for my granddaughter both last year and again this year (she is now 15 months old). I tried suggesting she spends a little less saving the remainder till she is a bit older and can appreciate and even remember what was bought for her. Let's face it, at that age the box it came in and the shiny wrapping paper is probably much more interesting than the actual present

Yes at a young age wrapping paper and boxes are the top most wanted presents.

Maybe a lot of that Mum's presents are essentials for growing kids like clothes and shoes? Who knows she could be turning every day stuff into fun objects. After all you can wrap anything.

Well there you go.

Personally, I think it's somewhat amoral..... and crackers

So a tin of assorted chocolates each is now 300 presents cos they're individually wrapped?

One day the children will realise that money doesn't grow on trees (not even Christmas ones).

The woman is on the Isle of Man, how hard can it be to find her?

A relative of mine used to dress her two-year-old in designer clothes, seemingly oblivious to the wastefulness of the exercise.


So a tin of assorted chocolates each is now 300 presents

They must be big tins. If the tins around here get any smaller you'll be lucky to get a couple of dozen.


Well there you go.

Personally, I think it's somewhat amoral..... and crackers


A relative of mine used to dress her two-year-old in designer clothes, seemingly oblivious to the wastefulness of the exercise.

but it's their money to waste on whatever they want to, so what's the issue?

They must be big tins. If the tins around here get any smaller you'll be lucky to get a couple of dozen. 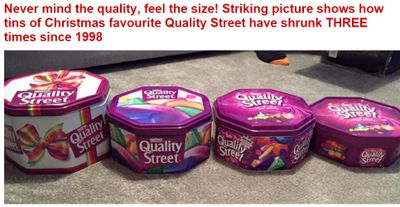 To argue with someone who has renounced the use of reason is like administering medicine to the dead - Thomas Paine
Message 11 of 17
(1,148 Views)
Reply
2 Thanks
2 users liked/thanked this post: billnotben, rongtw.

Well we all work within a framework of sense and sensibility chenks and we all set our own boundaries. I just happen to think that giving kids so many presents is crackers.

So there you go.

yes but that particular person clearly doesn't think it is.
what they choose to spend their money on is up to them.
it certainly doesn't need you or the BBC passing judgment.

i'm sure there will be plenty of people that think what you spend money on is "crackers", but would you like it commented on by the public?
Message 13 of 17
(1,091 Views)
Reply
0 Thanks

The moral of the story?
If you try to please everyone, you might as well...
Kiss your ass goodbye!

Have a nice day @chenks76 and be careful with your donkey!

Of course it's their money and they are free to spend it as they wish, but one can't help wondering if social media doesn't have something to do with it: Post the picture of your overburdened Christmas tree, and it will get shared, reposted etc., and you'll continue to live happily in the deluded belief that you have a million friends.