A couple of days ago I was driving home with my daughter, her partner and two young grandchildren.

We were close to home on a familiar straight road wide enough for two vehicles and in the distance I could see a large box lorry approaching with a Transit type van further back...no problem.

What happened next is something of a blur as everything happened so fast.

The road has a 40mph limit and I was at that limit as the box lorry got closer.

Suddenly the Transit appeared from behind the lorry and attempted an overtake...on my side of the road.

The road is bordered on both sides by high curbs and grass so there was nowhere for me to go.

I believe I backed off the gas but couldn't be sure.

There was a car close behind me so maybe that was why I didn't brake.

Next second the Transit shot across in front of me going to my right and I was on clear road again and alive. How, I have no idea.

When I got further into the estate, two Police cars were attending an incident at some shops.

Could be wrong but the thought occurred to me that the transit was travelling at speed away from the incident.

I do have the thought in my head that I and my passengers would have been killed.

I did also think seriously about getting a dash-cam but if one had been in place I don't think the emergency services would have needed the footage to determine the cause.

I would certainly have a dash-cam fitted. Maybe the emergency services wouldn't need footage, but your insurance company would certainly be glad of it if anything really bad had happened.

Just glad you and the rest are ok.

A float tip is pleasing in its appearance and even more pleasing in its disappearance.
Growing old is inevitable...But growing up is optional.
Message 2 of 16
(776 Views)
Reply
1 Thank
1 user liked/thanked this post: Strat.

and as they say , managed to survive to tell the  tale , Hope your family were not too shook up

@rongtw wrote:
Hope your family were not too shook up

They were all eyes down on phones and tablets and knew nothing about it.

Well glad to hear you are OK - though it will take a bit of time to get over the shock and you won't forget it.

Mine was not as severe as yours, though I remember driving down a motorway and a lorry carrying logs was it front. Short ones for fire I think, one bounced off the back and obviously we're doing motorway speeds. It came towards my car (in about a second), I had no time to react and bounced off from the bottom of the car and made a loud bang.

Had it gone under a tyre I would have had an accident. Could easily have done.

Glad you and your family are safe.

Just goes to prove what my old driving instructor told me many years ago; "no matter how good a driver you are you are only as good as the worse driver on your road!"

My temperamental GPS probably saved me from injury last week. I was delayed a few minutes starting a journey while I struggled to get the GPS to accept the destination. About 15 minutes from home I joined the tail-end of a traffic queue on a fast A-road and no on-coming traffic. I u-turned as I though there might have been an accident and used the GPS to find another route.

I read in the newspaper the following day there was indeed a serious accident where a large tree bough had dropped on to a car on the same road I'd travelled. I reckon I'd have been in the same locality if I'd not fiddled with the GPS.

Glad you are all ok.

Just brings it home how quickly your life can change in seconds.

So many people these days in a hurry on the roads just to save a few minutes of their time but one serious accident and all that saved time will be lost along with more.

We are born into history and history is born into us.
Message 8 of 16
(718 Views)
Reply
1 Thank
1 user liked/thanked this post: Strat.

I don't drive and this is why. glad you and your family are all safe, not as glad as you though I bet.

Good to know that you're all ok Strat.

Walking up my road, I must have been 20 seconds away from it. Weather seemed fine (not raining), a bolt of fork lighting hit my street - right in front of me. I was so close I can even remember the shape of it. I know you get the documentaries where people like to get close to the weather and they are interesting to watch, though they are more worrying if I happens in real life

Another was a car that came out of a local pub, apparently showing off mounted the payment and hit a girl. Fatal. I walk down that section of road so it could have been me. I don't mean it to sound "Well I am glad it was her not me", not at all - how I feel for that girl who's life was taken away so suddenly, she was in the wrong place at the wrong time and likewise I could have been.

I remember, as a kid, we were all on my Dads motorbike and sidecar heading uphill on a long straight wide A road. At the top is a shallow bend and coming towards us around the bend was one lorry overtaking another lorry. Luckily we were next to a large gravelled layby which my Dad quickly pulled into as the lorry thundered past.

A few yards later or sooner and it would have been gorse bushes instead of the layby. I remember we stopped there for a few minutes, got the flask out, and had a nice cup of tea. 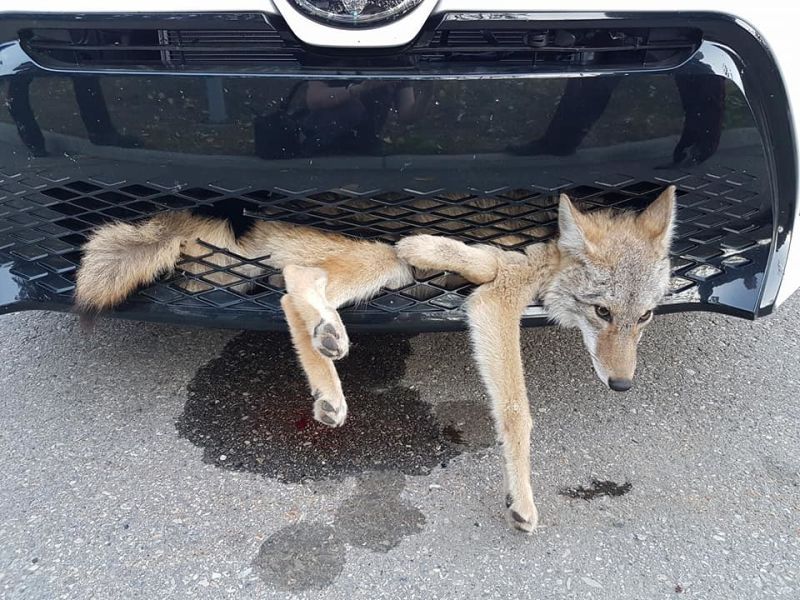 @DaveyH I was surprised that link didn't take me to Fox news.  I've never understood why there are so many vehicles in London with bull bars; perhaps they are for the foxes.

How times have changed. It used to be the coyote trying to catch a road runner.

The article says there was nothing wrong and they released it again. Was that the same day after a quick "look over" or did it get taken away for a thorough examination. It could have still keeled over and died once released.

I don't know about anyone else but i couldn't keep driving for 20 minute even if i hit a rabbit. I'd still have to get out and check for a survivor that needed medical attention. On that note, where does car insurance stand with animals that need veterinary treatment due to you hitting them?