I'm well aware of people who have ordered an item off Amazon and advised an alternative location if they are not in as the blue bin.

The item arrives, they are not in, the item is left in the blue bin and the purchaser requests a refund as no item received.

After the appropriate time the purchaser advises Amazon that the item has not arrived and a refund is issued.

Some of Amazons losses are down to their own packaging stupidity, e.g. using those cardboard 'envelopes' where the end flaps are just tucked in.

About 17 months ago I was building a new Media-PC and ordered several of the components from Amazon (which then arrived in 3 or 4 separate deliveries), hoping to be able to complete the job over the xmas holiday period.

According to its delivery note, one of the packages was supposed to contain 2 x 4GB RAM strips plus another item.  The other item was present but the RAM was missing, so due to the insecure packaging (no tape or glue used to seal it) it had either fallen out or someone had helped themselves.

No blue bin here, so can't blame it on that.

To their credit (no pun intended) Amazon immediately refunded the circa £80 after an instant call-back and speaking to them on the phone.

Yeah thanks all, am I not too worried if that is delayed.

More worried as I have to take prescription tablets, checked how many I've got (around 62), sounds like a lot but I have to take 2 a day, hence I have around a month left. My pharmacy orders them in and I usually have to wait a couple of days before I can pick them up. So might get my order in early just in case there is a delay.

Sorry to lower the tone of the forum (trust me eh?), it is more to remind me really. 😀

I guess anyone else in the same boat as me will have to consider that too.

Anyway when the work situation picks up, I need to upgrade my IT too here a bit. I'll be looking forward to that. 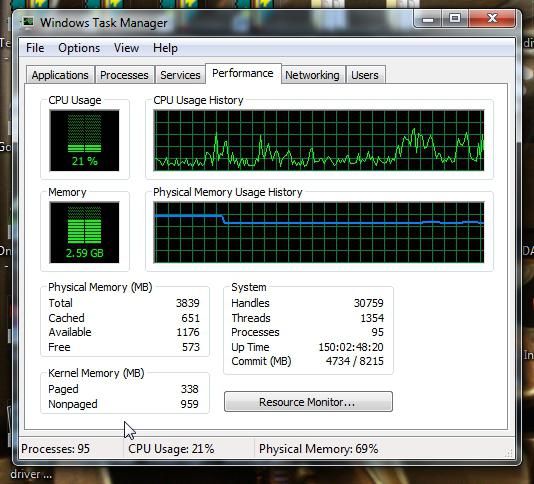 I've had to uninstall Avast - it randomly decided it wanted every ounce of ram and paging file for over 20 minutes before it eventually crashed.. removed it (eventually) and now the windows service manager shows services installed but no descriptions / properties etc...

To be fair that's about the only reason i could think of to reboot... if it wasn't for that, i'd have no hesitation in leaving it running. Maybe i should move my files onto the other machine and RD that from this.. so this isn't as important but can continue running?

Not exactly snapping at your heels, but my Win7 PC has now been up 119 days, strangely still 31 days behind you the same as when I checked when you first posted at 100 days!

Different hardware but still not bad for Windows with lots of stuff running.

My most problematical process is Internet Explorer which I still use for a few things, sometimes I just kill the main process and use 'Reopen last session' to get back to all the tabs that were open, which usually works. 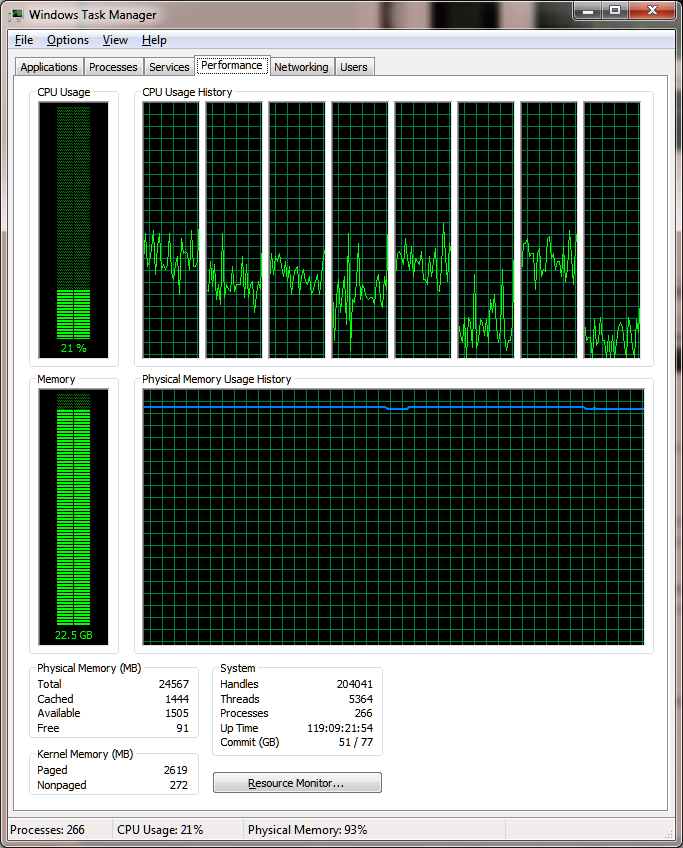 This machine is single core with just 4GB fitted! My other machine has 16GB and like yours, 8 cores (over 2 chips) but i've still rarely exceeded 11GB but i could never leave that running (unless we're away) as it's so noisy! I think it's got something like 8 or 9 fans inside..

Be interested to know why you need to keep these machines running 24/7.

Probably a combination of laziness and forgetfulness.  When researching something on t'internet I open a separate browser window (usually with quite a number of tabs) which then due to often wanting to easily refer back to the subject I often (usually!) don't close that instance. (Leaving the browser open rather than saving the page URLs preserves the tabs history).  I know how many instances are open and believe me it's a lot, but I've no idea how many tabs there are, I could only hazard a rough guess.

When I first built the PC just over 11 years ago I installed 6GB of RAM, but then one day several years ago 24GB turned up in the post, kindly donated by my brother following his upgrade.  So that's what's installed now although 4GB of that is dedicated to a RAM Disk.


Be interested to know why you need to keep these machines running 24/7.

Slow boot up times, all auto-starting software when you log on slowing it down even more, then updates, AV suddenly demanding a restart (when you've only just switched on) etc. It's only a single core machine with a lowly 2GHz proccy and can take up to 5 mins to become stable when starting it up. Compare that to the noisy larger machine which will be ready for anything in around 30 seconds and you'll see why i don't like cold boots or reboots.

I also have a webserver running which is kinda useful to have online rather than offline with DNS still pointing this way and consequently breaking.

It runs a VPN server, custom written DNS name server and at times a custom DHCP server too.

Horses for courses I guess.

For instance, if you can tell me how I can fit a quad-tuner DVB-T2 and a quad-tuner DVB-S2 TV-card (that's 2 TV-cards) into a Raspberry Pi AND run Windows programs including servers, then you might get my attention.

Yep my friend is a sysadmin, nice person and knows his technology.

For example he suggested what to order for my current PC, all the usual stuff. But he doesn't skimp on cheap things, so it does involve a bit of cash.

So I have a PC with a bit of a poorly graphics card, with a Blu Ray writer which is quite handy.

I tend to use my Mac Mini nowadays. Like anything it takes a bit of getting used to - but now I like it.

The reason for mine is because a particular server program which I prefer to use (MediaPortal) continuously writes/reads a buffer on a Hard Disk or SSD if used to watch 'live TV' (but not when watching recordings).  There is one buffer file being written per channel being watched (multiple clients).

I'm curious as to whether your avatar is willy-waving or just wishful thinking?