Beko - how do they get away it?

Beko - how do they get away it?

There have been a lot of publicised stories surrounding Beko's recalled 6kg and 7kg tumble dryers, which have a tendency to burst into flames. I bought the 8kg model, DSC85W, which has never been subject to a recall.

Today I see that Beko have been hauled into court because one of their DSC85W tumble driers was the cause of a fatal fire. Not only that, but this model has been implicated in 20 other similar incidents (I wonder if they exclude the models which differ in model name and faceplate, but are otherwise identical?).

And the cause of it? The exact same fault that caused the 6kg and 7kg models to be recalled. And why didn't they recall the 8kg model? Because there were "only" 20 incidents, compared to 100 incidents with the other two. They claim that the incidents occur when the machine are used in unheated rooms, and yet every incident I've read about it's been in somebody's house. I've read about their fridge-freezers being kept in garages and catching fire though.

Beko are off my shortlist for any future appliance purchases. They are untrustworthy, in my opinion. I'd go so far as to say some libellous about them and their weasle lawyers, management and directory of "quality".

I use Whiteknight ive had mine 5 years now and never needed any repairs, not bad for £150

Fully agree with your comments, what they should have done was replace all potentally faulty tumble dryers at no cost to the consumer as they are clearly not fit for purpose.

To advise people to continue using a product that could cause death or injury is totally irresponsible and I cannot see how they can get away with it legally.

Imagine if such a fire started in a block of flats.

I wonder who pays for the damage caused to properties ? I can see home insurance companies claiming that users knew the appliance was faulty so they are not covered insurance wise.

Where are Health and Safety in all this ?

These dryers basically use the same parts so it's either a design fault or just a bad batch of components. Design faults can be that the owners just puts the timer to 120 minutes and leaves it and the dryer has no sensor to detect dry clothes and turn off the heating element of the dryer. Components are different in that there is a fault in the construction of the component, they do sample tests and if a percentage of that batch fails the whole batch is rejected. The things they don't do is put in say a uniform and set it for the full time and run it to see if the machine catches fire or overfill it and see if anything serious happens

From what I have read fluff gets past the filter and on to the electric motor so a single spark and you have a fire.

For many years it has been advised to not stop a tumble dryer mid-cycle - but to run the 'cool-down' part of the cycle before switching it off.

I think I would be looking at a 'not fit for purpose' claim if I had one of these machines. This would have to be against the retailer though.

I tried a " not fit for purpose"  against Argos and my credit card company, with regards to ongoing whirlpool dryer problems.

Both refused, on the grounds it was not a product recall, if the item is used to the manual , there is no safety concerns ( says the manufacture ) and by sending an engineer it was a modification 9 enhancing safety the engineer told me )  been applied to the machine ,  and  not an upgrade to an unsafe part , and trading standards are perfectibility happy with that

With the whirpool saga , all retailers and credit card companies have been fully briefed on whats to say , but maybe worth a go with Beko

ITWorks yes the CC companies will have been given a get out clause - they're big financial business, the government couldn't have them being attacked en masse like that.

As for trading standards, they only exist to pick on the little businesses. They're not interested in big companies that are scamming people or putting their lives at risk.

While I do not have a tumble dryer, I do not like the things, I do have a Beko freezer, about 4 years old now and still working fine, but it is in the house. i would certainly buy another.

but I do agree with you that they should have recalled the other dryers. Sadly things do go wrong, Hotpoint had a problem with their dryers, but it took ages for them to fix them, my next door neighbours was waiting for almost 9 months for hotpoint to sort things out.

Hi i have a DSC85W bought 2014 and before 12 months the condensors started melting and smelled of burning. Beko replaced the sensor and circuit boards and said it had the safety device fitted,which is puzzling as why did it melt then. I have phoned them again as its melted again thursday in fact. Could smell burning and on inspecting it it has melted again. Was only 6weeks ago that i cleaned the condensor out at the bottom. Very worrying. I dont want this fixing and it has put me off beko now.I actually sell white goods and bought this model as it stated they had a safety device fitted since their recalls of the 64w models in 2013. Will be buying a heat pump next.
20160306_030041.jpg ‏3976 KB
Message 11 of 14
(2,338 Views)
Reply
0 Thanks

Sorry to make light of all your issues guys, but we've only got one of these.

Put out just before we go to bed and hung with the days wash no problem - along with no bills, no fires, no parts to wear out, no worries, and all for a fiver from a charity shop. Oh yes, and it also works outside when the sun is shining! 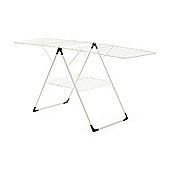 i had an nice airer, but it fell apart after a few weeks, maybe IO should get one made from wood, they lasted so much better.