Barney at the Boozer

Barney at the Boozer

So, Guardian columnist Owen Jones  gets into a barney outside a boozer at 2am in the morning, and according to him it's a blatant premeditated assault by the far right activists targeting minorities and leftists.

Perhaps the better question and one being asked by @Patcondell on Twitter is why was a 12 year old was out at this time.

Just a self important clever clogs, or .... well, that's it. 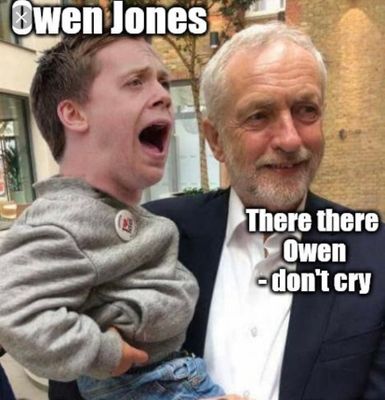 @Minivanman I gather he got kicked in the head....so no damage done then

For a moment I thought an american purple dinosaur was out on the lash...

He was on Sunday Morning Live and played down the whole incident.  I've noticed that he's matured a lot in the last couple of years, i.e. his utterances are more moderate and considered rather that those of student politics.

More moderate maybe but not that I've noticed, but either way he's so far up his own 'how's-yer-father'...

As for playing down the incident I think he's realised just how foolish he sounded having given out so many tweets of his own plus no doubt, straight onto the media after the incident occured. One things for sure, his column in the Guardian will not be open for comments about this - but then they very rarely are on anything he writes because of the way those that do comment never miss the chance to make fun of him.

Poor lad but hey, like Abbott maybe he really will tone it down a bit.

We can but hope

I've no time for the politics or opinions of Jones, Corbyn, Abbott et al, but I don't think we should be making light of anyone being attacked in the street, whether it's targeted or purely random.


The Internet gave us access to everything; but it also gave everything access to us.
James Veitch

But, dealing with "random attacks" requires police to have powers to actually do something, and the government doesn't want to pay for that, at least not the current lot...

I mean, imagine a world where crime was actually punished properly, there'd be no rich people, the world would be full of happy people, and everything would just be so nice, we can't be doing with that!!!

Well no, not if it happened to the extent it did but these things need to be put into perspective yes? From what I can gather this guy is milking it for all it's worth but that's journalism I guess.

That's my take on it anyhow.

From the Guardian this morning and along with everything else he now adds that the attack was "politically motivated" so what next, is he going to add Brexit into the mix?

Christ almighty, what a snowflake.

The media reported that he was out celebrating his birthday on the night in question (Friday 16th August).  Wikipedia states that he was born on 8th August.  Nothing wrong with a late celebration I suppose, although cynics might think the birthday thing was thrown in for a bit of extra sympathy; no mention of the attack being homophobic (yet).

He also included being attacked because he was a "minority", so given that he is a white male out boozing with others...

Does anybody know if he eventually found his dummy?

I'm in a minority too that I just made up, I shall go seek attention to let people know that I'm the only one of me and I should have special treatment because I'm the only one who knows me so well...

Nah, I can't be that pretentious, after all, my head isn't up my bum...


but I don't think we should be making light of anyone being attacked in the street, whether it's targeted or purely random.

Good luck with that on here...