Oh no - not another political thread.

You do love making us work

Give the political members ( thinkers ) of these fine forums a section all to themselves for political threads where anything goes and you won't need to moderate it. And you could hide it so it is invisible?

I just want to LEAVE

I only hope the UK negotiators stick to talking about trade, EU citizens, and the pay-off all at the same time.

Separating these issues would be a mistake and give all the advantage to the pompous EU negotiators.

I voted to leave, was always a silly situation for me, Scottish independence and out of the E.U. At least I got one wish. E.U has done nothing for me apart from imposing silly rules made by people you never heard of. Happy to see the back of it. What I would like to see is the negotiations though which no doubt we won't be a part of whatever deals are struck behind our backs. 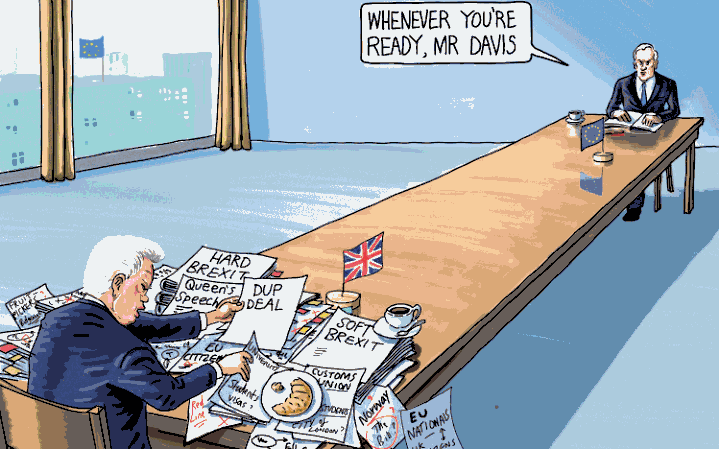 @billnotben  It's been said by several British politicians on TV that there is a phrase commonly used in the EU:  Nothing is decided until everything is decided.  Presumably this case is no different.

The Brexit negotiating team..... according to John Cleese on twitter.

David Davis has caved in to the E.U timetable day1 and the refusal to discuss a future relationship before an exit deal was agreed. Talks between the UK and European Union will now not begin until October at the earliest as the Brexit negotiations follow the timetable set out by Brussels.

I still think it won't happen. Either that, or we'll end up with something that's essentially the same as we had before (ie now). Too many delaying tactics for it to be credible.

ADD: And I wonder what exactly she promised to Nissan's boss in the "secret" letter he received that caused his attitude to change, from being worried to just about doubling investment in the UK plant.

'Future relationships' and 'caved in', where did you read that?

Even the persistently perverse 'anti-Brexit come what may' Guardian only refers to it as a park on free trade negotiations and anyway, who said it was going to be easy. No wonder we are better off out when we have to deal with puffed up potato people like Michel Barnier.

Let's not read too much into day one for as the man said, "it’s not how it starts, it’s how it finishes that matters" and besides, never believe what you read just because it's been written,  wink:

......talking about potatoes and the EU, the Mrs was dishing up a ham salad evening meal earlier to eat outside and happened to mention that the small spuds we were having with it "were Polish"."What, we are even importing those now?" I said. She replied "no you deaf old duffer, I said Cornish!"

E.U and UK rule out a soft Brexit too.