sending us all a sample sachet of All-Bran.

I'm ok with that as long as it's the "before" sample.

He might be sending us all a sample sachet of All-Bran.

If it worked to get it out of our system, why not, or would we prefer political senna pods?

Both contenders for PM say they will re-negotiate our deal with the EU and BJ firmly says we will be out by the end of October.

How realistic is this? It isn't!

The EU will be on holiday throughout August. When they return in September they will be occupied in electing new commissioners which may take a while. Once this is done the new commissioners will have to get to grips with their portfolios and then negotiations can start. It seems unrealistic to suggest  these can be completed by the end of October. We shall see.

Just another sad episode in the on going remainer soap opera.

The BBC’s multiple-sourced story this morning reveals that Johnson was not given full access to all intelligence material when he became Foreign Secretary in 2016. Now, it seems this may in part have been driven by Theresa May’s ‘control freakery’, and some spooks were clearly not comfortable with the decision, but it does go to the heart of Johnson’s trustworthiness.

A very worrying disclosure. Why would TM appoint BJ as Foreign Secretary then withhold info from him. I assume she wanted him inside the tent rather than outside.

More worrying, as you say, is BJ's trustworthiness.

C4 News last night did an indepth report on BJ which pointed to his trustworthiness and also his competence.

No doubt in my mind that Theresa May is a control freak of the first order, why else would she side line brexit Secretary and deal with it herself, answer .... she never wanted a deal that would get through house of commons because she is a 'remainer who has remained a remainer' ( Jacob Reese-Mogg quote ).

Another example of lack of thought from a Brexit supporter - this time it's Donald Trump:

Describing how Washington's patriots defeated the British between 1775 and 1783, the president told crowds gathered to hear his Fourth of July  address: "Our army manned the air." At that point he paused briefly, apparently realising he had misspoken, before continuing: "It rammed the ramparts, it took over the airports, it did everything it had to do …"

That's from The Independent, but it's widely quoted, often with a video clip.

Hopefully he will be more supportive to our new PM.

What effect will his comments make to any special deal we are looking to make with the US when we exit the EU?

Its likely more because they all actually did nowt but undo anything already agreed following the shining example of do nowt Davis,

and May left it too late to actually do owt.... on the 'easiest deal in history' all sorted .... 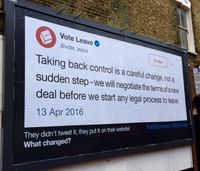 Well, demonstrable signs of what would be to come for us mere mortals under the quality negotiators the Brexiters have ..

Ok, lets put Brexit to one side for a minute and ask the question, ' If you hold a referendum on any topic exactly what are you doing ? Are you seeking an opinion and nothing more or are you saying the government cannot or will not decide on a specific issue so we are asking for the public to make a decision with everyone being given the opportunity to vote.

Equally if you hold a referendum and get a majority in favour of a particular action can you then start to add conditions to the outcome that were never included in the original question.

By using the word majority let us assume 60% voted, the outcome is 40% in favour, is it not fair to assume the 40% who did not vote were either uninterested or simply undecided therefore a fair way to deal with that is split it 50/50 so those in favour of the motion still win.

Please take Brexit out of it and just address the question.


Equally if you hold a referendum and get a majority in favour of a particular action can you then start to add conditions to the outcome that were never included in the original question.

or simply drop conditions that were very clearly stated as included ...

Boris Johnson says leaving on 'no deal' terms and accepting a WTO arrangement will not be detrimental. Here insiders at the WTO paint a different picture.