Surely the Ecuadorian government is footing the bill, the reason given for embassies and their staff not paying taxes is that they don't use services, e.g. the police, despite some of their missions having an armed diplomatic protection squad officer permanently at their entrance.

Ah but let's be fair, these guys need the money saved to pay those parking fines.

Which they all do of course.

I'm not as worried about parking fines as I am about them causing fatal road traffic accidents and getting away with it, as has happened.

Driving through London behind a posh car with CD plates, and a number plate written in Arabic or something like it. I kid you not.


The 'Swedish charges' have long since been dropped, but - as has been mentioned - a number of Westminster MPs, who have a lot of time on their hands since we left the EU on 29th March, now want those charges reinstated, seemingly whether the women in question want that or not.

If I remember correctly, the Swedish charges weren't "dropped" as such, but under Swedish law, the defendant has to be interviewed within a certain time-frame, or the charges have to be put on hold, and that's what happened.

His lawyers will no doubt argue that a fair trial is impossible after all this time, memories fade etc.

Complicated to say the least. 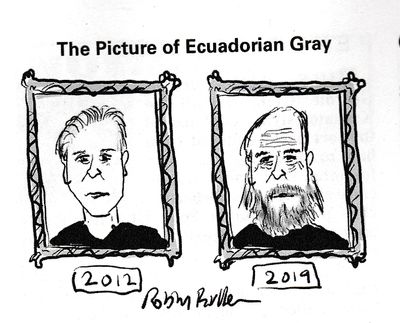 As always, but clearly a Robin Burle I think it is gets the credit, so why mention it. Are they the only publication to use his/her cartoons? Perhaps we should mention The Times every time we use one by Kipper Williams.

Interesting read earlier that noted under Swedish law and had Assange been found guilty of rape, the maximum prison sentence would not have been more than six years. His self imposed exile in the embassy had lasted for six years and six months.

And the standard of living in a modern Swedish prison would probably be on par with the conditions in the Ecuadorian Embassy.

Indeed, but would he have been given access to the internet?

I doubt it somehow but, y'never know these days what with human rights even for those that have done human wrongs.

It was reported that the Norwegian mass murderer Breivik wanted internet access when he started his sentence, but that a typewriter was provided instead.

Assange sent down for breaking bail with fifty weeks in the clink.