Another gem from my Office Graffiti book

Another gem from my Office Graffiti book

The board of directors has decided to instigate a more scientific method of
selecting management material and is therefore setting this brief test to
ascertain your potential. It is not intended to be rigorous, merely a simple
questionnaire designed to eliminate truly unsuitable candidates. You have
three hours.

A pass mark of 85 per cent should be set.

Experience; is something you gain, just after you needed it most.

When faced with two choices, simply toss a coin. It works not because it settles the question for you. But because in that brief moment while the coin is in the air. You suddenly know what you are hoping for.
Message 1 of 2
(174 Views)
Reply
0 Thanks
1 REPLY 1

Re: Another gem from my Office Graffiti book

Is it just me or are we all missing something here. It's amusing, but what don't I get? :smiley

PS. Sort of reminds me of these Far Side cartoons by Gary Larson. 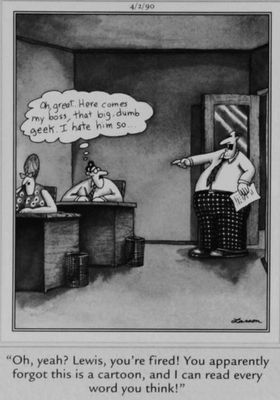 Don't limit the friends you haven't met with arguments you'll never have.
Message 2 of 2
(155 Views)
Reply
0 Thanks
Topic Options