Age Test - What we don't do now

Age Test - What we don't do now

Ok I thought I'd start a light hearted topic on the things you did when you were younger (which shows you your age).

I'm 40 - but here are the things I remember doing when I was younger which I no longer do.

Typewriters - where as I kid I used to press multiple keys and and jam it.

Using phone boxes and payphones before mobiles were around. I can only think of one location round here that actually has them now.

Going into the bank and paying credit card bills by cheque, before direct debits took off.

Reading newspapers, before you could just go on-line. Adverts would actually have a coupon you could fill in a post ito get more information back through the post.

Tuning in an analogue TV. Being in London and before ITV got bad - the 1991 franchise round, then abolished the regions and got into the false misguided conclusion Ant and Dec have talent (still, the last laugh is on them to the bank). We were Thames/LWT, but I worked out we could get I could get a weak TVS signal, so I tuned one channel onto that and used to watch it.

Still, looks like I have to pay in a cheque today which is ironic.

When I was 11 or 12 years old, I used to put 5 or 6 blades of grass between finger and thumb and chase girls round the playground telling 'em it was a spider. Now at 64 years old I still look back on those days and have a little chuckle. Might try it on wifey sometime.

A float tip is pleasing in its appearance and even more pleasing in its disappearance.
Growing old is inevitable...But growing up is optional.
Message 2 of 33
(857 Views)
Reply
1 Thank
1 user liked/thanked this post: rongtw.

I remember in my student days, queuing up at local phone box to ring my girlfriend, who is now my wife, then going into the local pub for a pint on my way back to my bedsit!

Watching B&W TV, and changing channels by rattling a bunch of keys.

Tea boxes and orange boxes, milkmen delivering milk, two postal deliveries per day, the first one very early. The rolling symbol in the top corner of the TV screen on the commercial channel, which gave a minutes pre-warning of an ad breaks. Quiet roads, empty motorways during the early hours - the world never sleeps now.

Small corner shop owners that used to have a bit of friendly banter with customers, not many of those about now. Honesty boxes outside rural area 'farm shops'

I use "Have you ever actually dialled a phone number (i.e. on a dial)?" and "Have you ever used a typewriter?" as questions to determine whether someone is old or young.

@Alex  I think it was Carlton TV in the end but Thames continued to make programmes at their Teddington studios.

@harrym1byt  I saw a milk float a week or so ago, and realised I hadn't seen one for years.

Not just the warning of a commercial break, but the red triangle on the screen on Channel 4 warning that the film was of an adult nature (thereby ensuring that no pubescent boys would switch off and go to sleep).

Having to go to the library, pre Google.....

Pressing button 'A' or 'B' on the old public telephones.

Walking the half mile to primary school without parents at age 6. It was a small school with 32 pupils and the village was mentioned in the Domesday Book. You were not a local unless your family had lived in the village for over 150 years, but everyone knew everyone. Petrol was on sale outside the village shop at a pump which had two half gallon glass receivers and was pumped by hand.

Cheyenne. (remember that one anybody?).

Aha, Clint Walker as Cheyenne Bodie. Always remember him in that role when I see The Dirty Dozen.


Petrol was on sale outside the village shop at a pump which had two half gallon glass receivers and was pumped by hand.

I was very young then, but I remember when petrol stations said "Self Service" as some had attendants and wouldn't let you do it on your own.

EDIT: Whilst thinking about petrol:

Black and white rental 405 line TVs, with the Repair Man in the Radio Rentals van. 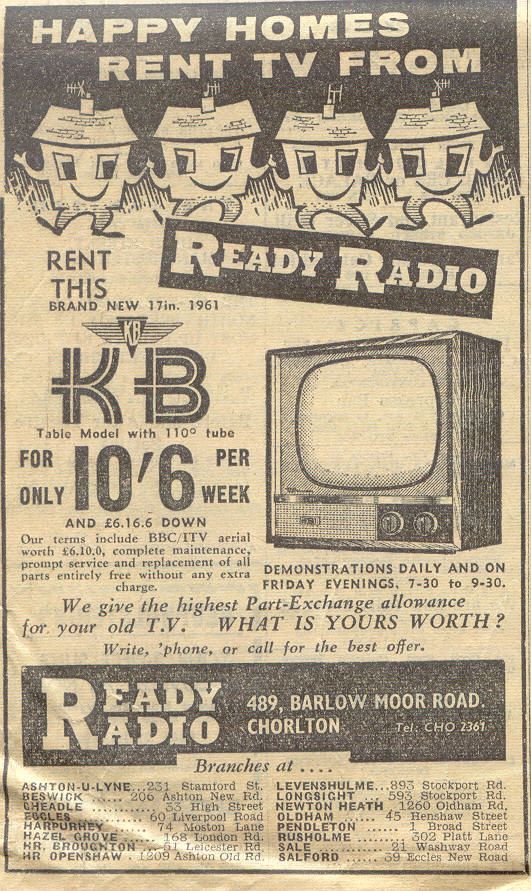 Ok, another one.
Going to a video rental shop with my dad and they had separate sections for VHS and Betamax.
Message 15 of 33
(680 Views)
Reply
0 Thanks
Topic Options