.... with lives being lost as bush fires take a further hold in Australia.

So many homes, so many animals lost to the flames and like many here, I have relatives there.

Thankfully those I have been in touch with are safe for the moment but extremely worried. As for the hot weather, just cannot imagine having to put up with a reported 40 degrees across the whole of the country - that's over a hundred degrees Fahrenheit!

A natural distaster as Prime Minister Scott Morrison said in an interview, or global warming.

Either way, it's a tragic start to their new year. 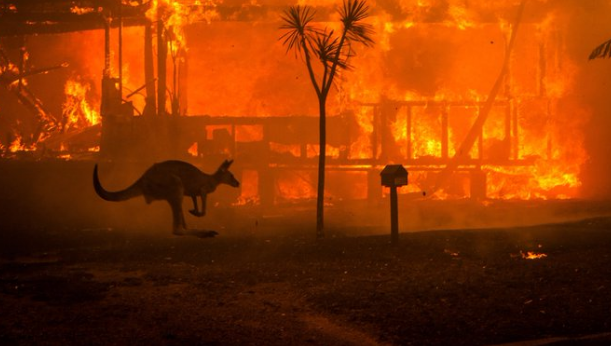 There have always been fires in Australia,  it is the driest continent on Earth with some of the most spectacular lightning storms you will ever see,  and the aboriginals used to use fire in their hunting and many other reason   https://www.dpaw.wa.gov.au/management/fire/fire-and-the-environment/41-traditional-aboriginal-burnin...... the problem now is that there are houses in the way ! The government used to do controlled burns in the winter to get rid of the fuel load on the ground, but the greenies stopped them doing it -  https://volunteerfirefighters.org.au/the-greens-not-climate-change-are-to-blame-for   the result is the massive uncontrollable bush fires they now get..  When we lived in North Sydney we were involved in the 1994 fires, we had been listening to trees exploding and smelling smoke for a week when we were on the verge of being evacuated when the wind changed and we were OK - I still have some burned eucalyptus leaves in a jar,  they fell from the sky like flaming snowflakes - but the sad part was most of the fires were started by arsonists and cigarette ends, not nature.

Just like in UK there have always been floods,  but since the planning rules allow houses to be built on well known flood plains now houses get flooded too.

It is definitely one of those situations where humans are to blame, before we took it upon ourselves to douse bushfires in water to "save the environment", they would naturally sweep through and burn themselves out, which in turn fertilised the soil for new growth to take place, activated seeds that evolved to survive small bushfires and sprout afterwards, and animals would move away in plenty time to avoid becoming barbecued, but now, the plant matter isn't allowed to burn, so it builds up, and dries out, and more grows, and dries out, until one spark triggers a massive and devastating firestorm as is happening now in Australia...

Mess with the balance of nature, and nature will have her revenge to redress it...

I have relatives who have a farm and an unrelated business in New South Wales, Australia.

We haven't heard anything from them but that could be communications down.

Clearly some do not accept Scott Morrison’s views and verbally told him so when he visited some of these areas.

Best thing Morrison can do is get laws passed to

2.  Make sure states can resume controlled burning to prevent out of control fires happening..

The time might not be far off when due to extreme temperatures and weather conditions it may not be possible to continue to live in some countries.

No problem, we'll just turn up the air conditioning. 😞


Don't limit the friends you haven't met with arguments you'll never have.
Message 8 of 37
(580 Views)
Reply
0 Thanks

According to recent studies a lot of Australia's arid and desert regions are there because of the regular burnings over the centuries by the indigenous people destroyed forests. With more forested areas a lot of the out of control fires wouldn't have happened. As large forested areas tend to have their own mini climate.

Did they still go ahead with their firework display? I saw nothing on the news other than a bit a few days prior with many Australians saying it would be insane to go ahead and add to the smoke and fire they are already surrounded with.

@billnotben i think twocvbloke was referring to modern humans being to blame, in particular greenies.

The dry areas in Australia ( so called deserts ) are not like the Sahara ( which arguably was cause by humans chopping down trees and letting the soil blow away, leaving only shifting sands ) but have vegetation mainly in the form of saltbrush shrubs and spinifex grasses,  both of which are incredibly hardy.  The Gum trees ( eucalypts ) which are native to Australia are also very hardy and easily survive ( indeed flourish ) through fires.  The number of aboriginals that lived in Australia before europeans arrived was very small and they were nomads, not farmers and their footprint on the country was very light indeed, they understood the  environment very well.

If you had lived in Australia and seen the truly awe inspiring electrical storms they get, it did not need humans to light anything,  nature was well capable of starting its own fires.

Fires are a fact of life in places like Australia and California and the vegetation is well able to survive and thrive after normal fires,  the thing that has changed is the greenies demanding that  controlled burns were stopped and the result was that enormous fuel loads built up and when a fire happens now it it impossible to control - the clueless greenies strike again,  just as the animal activists in UK released Mink from fur farms into the British countryside and caused a decimation of our native species like water voles - greenies do not seem to be able to see the whole picture - just a little bit, they are dangerous fundamentalists.    The other problem is that now people have built houses in the trees and the fire service risks life and limb to protect houses - rather than just let the fires burn themselves out.


modern humans being to blame, in particular greenies.

While that is true it doesn't change history or the then habits of the aboriginal population which appears to have had a direct effect in producing some of these arid areas.

Australia's landscape has past the tipping point and there's probably no way to reverse this. Their safe livable areas are shrinking rapidly.

I don't suppose there is anything to gain from Australia blaming this on climate change given the massive amount of coal, gas and iron ore they export.

"Nothing to do with us sport"

There again, Britain kicked off the industrial revolution so...


Don't limit the friends you haven't met with arguments you'll never have.
Message 12 of 37
(513 Views)
Reply
0 Thanks

The truth will come out about clueless greenies with their tunnel vision in the massive inquiry that must follow these devastating fires .... This is GMDB - greenie  made devastating bushfires not MMGW

Australia continues to burn and in doing so we all give thought to global warming  - which is ironic in some ways as for a couple of days now in an effort to cut down on energy use, I have been looking for and have been unable to find a one or two slice single unit toaster.

Not wanting to sound facetious, but how daft is it that when wanting just the one slice (which is quite often) elements on both sides heat up. How wasteful is that when what is needed is a not a sad single sliced toaster, but one that will heat up either one or two slices.

Maybe somebody should patent the idea... or has somebody done so already.


Don't limit the friends you haven't met with arguments you'll never have.
Message 14 of 37
(352 Views)
Reply
0 Thanks

Or just maybe use google to find things on amazon..... 😂

'spensive though, but then, less costs more these days!!!