A new shaft being prepared for northerners?

A new shaft being prepared for northerners?

The northerners are quite familiar with shafts, but perhaps not of the type suggested by Charles Moore in the Saturday Telegraph.

No one has to agree with my opinion, but in the time I have left a miracle would be nice.
Message 1 of 6
(407 Views)
Reply
2 Thanks
2 users liked/thanked this post: TTman, Minivanman.
5 REPLIES 5

Had a part delivery of firewood only yesterday as it happens and have now stacked it up in my home made wood store ready for next winter, so this nonsense about not burning wood or coal has really got right up my nose.

Our little wood burner is our main source of heating and placed central in the house. We do not have a gas or oil supply so tell me, if these Whitehall enviromental bandwagon warriors want me to stop burning renewable fuel, are they going to pay for a new stove plus all that goes with it?

I should cocoa there're not.

Wood is stored for a year where it dries and seasons, it's then stacked as needed in the porch and from there its stacked (in a smaller verision of that outside wood store) for use again as needed alongside the stove. So by the time I burn it, it's nice and dry crackle crackle.

This is 'ban plan' is in England of course, but no doubt the nanny Welsh Assembly will follow suit but they'll have a fight on their hands because much of the country is still very rural. London it is not.

Another version of those Rebecca riots?

Y'never know, any excuse to try on the wifes best dress! 😂 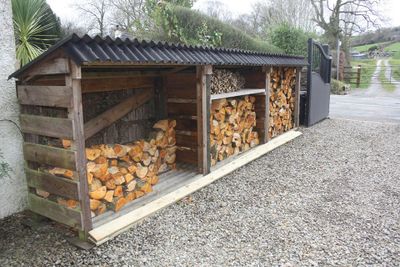 Locked and loaded n ready for next winter.

Wood laying in front for new fence out back... old one got blown down in that storm. ☹️


Don't limit the friends you haven't met with arguments you'll never have.
Message 2 of 6
(350 Views)
Reply
0 Thanks

As I understand it its not a ban, for now, but a polite request not to burn coal or damp wood, so I think you're Ok with what you are doing. The whole thing is bonkers as I am sure the Government were offering incentives to encourage people to buy wood pellet burning stoves. They did the same with diesel you'll recall, reducing the tax to encourage its uptake to only go "Oops, we shouldn't have done that", twenty or so years later.

As with most government decisions they are politically expedient.

Which means todays badly thought ot green solution made under

tomorrows planet destroyer - and must be vilified and taxed,

taxed, taxed I tell you.

It does seem like action before thought for expediency.

Make policy, and then try to justify it afterwards.


Don't limit the friends you haven't met with arguments you'll never have.
Message 5 of 6
(288 Views)
Reply
0 Thanks

Round here there are a lot of houses with open fireplaces still, and a number of them do burn some rather stinky coal, and one chimney which I can view form the living room window is often pooting out clouds of steamy wet coal smoke from having a bucket of the wet stuff chucked on it, but do I say they need to stop? Nah, it's the North East, coal mining built the region, and if people wish to stick with it until their dying breath, let them be...

I personally have no time for coal, the previous house had an open fire in which we burned "Ovoids", which were a smokeless compressed briquette of goodness knows what (they smelled like PVA glue when un-burned too!!), granted they were pretty clean burning compared to bog standard housecoal, but, the mess, ugh, the joke about the "carbon footprint" at the start of that article is 100% true, coal is a messy business, that's a given...

I'd much prefer to burn wood, because it simply is the best thing, it's 100% renewable, leaves little in the way of ash, is relatively clean in terms of handling & storage, and it's everywhere, so long as it is properly managed and not just clear-cut to pander to the yuppies of course, but that said, no fireplace or stove in this house, so no point my harping on about it, but I do have my firepit in the garden, into which goes wood, most of the time at least... 😁