Upstairs one of the windows has developed a large gap on the side where the hinges are that allow it to open. Initially I thought it was a misfitted frame from the factory that nobody had noticed however on inspecting it further recently i've realised it is in fact the hinges at fault.

They are strange hinges, with a 90 degree fold in the metal so that the hinged part is on the outer side of the wood. The same applies to the swinging part of the window - the hinge is fitted in an L shape.

Now what has happened is that the part that is fixed to the frame has developed seized pins and when you close the window, it pulls the folded metal part away from the wood - thus leaving a gap. 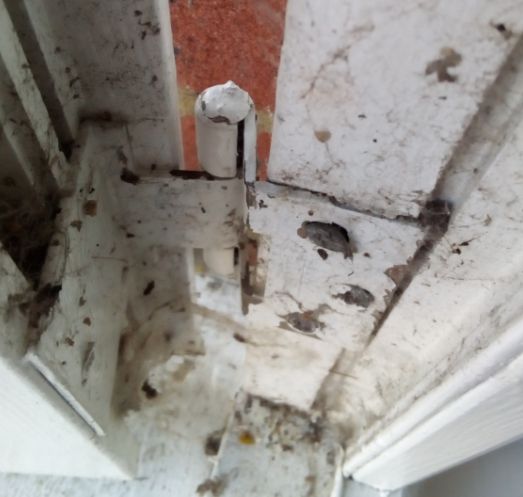 This means that the metal is flexing when closing the window and will at some point break allowing the window to fall out if it is not fixed.

It's now so large that you can see day light through it. 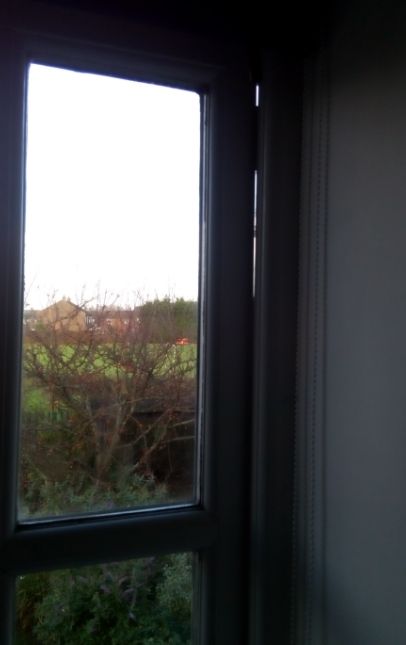 The owner of the properly has just had to replace the shower as that had cracked and leaked all over the floor so he isn't going to want to do any more maintenance for a while and the agency attitude (from a clueless bimbo) was to use filler in the gap. 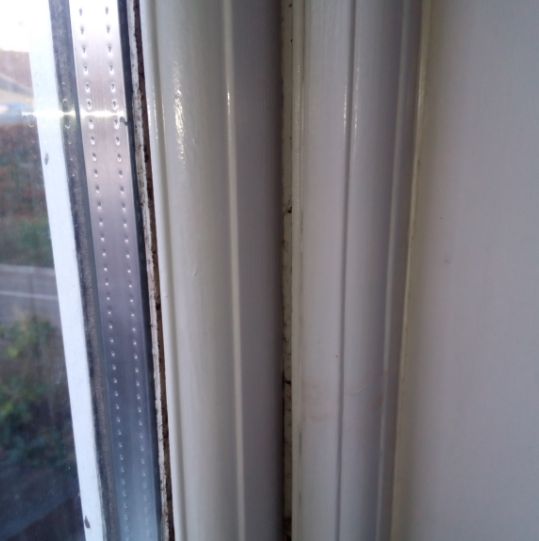 So the hinges need replacing, the window is up on the first floor. Can I have some ideas please?

As for replacing them, I'd recommend getting an extra set of hands on ladders outside and some of them "dent pullers" (which they use for carrying glass panes too), remove the window from the frame so you can work on it in safety, swap the hinges, refit and you're done...

Also keep the number of a local glazier on hand, just incase...

You are on very dodgy ground here as this is the Landlords responsibility and if you attempt to fix it there is the possibility you 'discover' or come across some other problem that may not be obvious but once you start the job you will have to finish it no matter what the financial cost to yourself.

Personally I would just write to the landlord simply to inform him of the problem and seeking his advice, do not indicate you want the problem fixed simply that you are concerned the window might drop out and injure someone.

What you are after is a written reply to confirm that he is aware of the problem, in short it's his responsibility to sort it out, not yours.

Meanwhile I would just stuff some waterproof sheet or similar in the gap and forget about it.

I guess this is not the type of answer you want but under the circumstances you describe that is what I would do, if I owned the property then of course I would take the necessary action to repair it as it can only get worse.

gleneaglesreply, but I would suggest what has caused this problem is that the hinge has seized and adding some lubrication will help delay the inevitable snapping of the hinge.

As @gleneagles says.... you are on dodgy ground.... and his advice to WRITE to the landlord, asking him about it, and asking  for a reply.... will be doing two things.... it will be informing him of a defect. for which he is responsible for repairing.... and his written reply should be "evidence" should it be needed, that he is aware of the problem... and has not dealt with it... Local Council Housing Officers take these kind of things very seriously, and will back you up to get it fixed, if it got that far...

I would add to the landlord, that with the hinges in the state they are in the property is not secure.
Someone with a ladder and basic tools could break in.

Put the frighteners on them that if the property is not sorted, then that is a possibility.

@7up - I would start by getting my camera out taking progress shots along the way starting with cleaning all the crud out of the frame then removing the hinge screws from the frame side one at a time. Fill the screw holes with a couple of matches to ensure a tight refit, then replace the screw so that it is flush and countersunk as it should be.

I’d then invest in a reel of insulating foam and seal any remaining gap, as there’s no point in you paying to heat the environment. Once I’d done that I’d then write to the landlord as mentioned stating what is needing replaced and why. In addition to that I would tell him what I’d done along with some piccies to show him your work and also highlight the fact that it is only temporary, and requires his prompt attention.

If you don’t get a reply from the landlord in a timely manner you at least have evidence of the issue and how you went out of your to help resolve it.

Yes tell the landlord to fix it.

fold up news paper, jam it in the gap to stop the drafts.

You could use sticky tape to seal the gap, but it will make a mess,


I would add to the landlord, that with the hinges in the state they are in the property is not secure.
Someone with a ladder and basic tools could break in.

Put the frighteners on them that if the property is not sorted, then that is a possibility.

I might have misunderstood some of @7up posts on earlier occasions but got the impression from them that his landlord is not on @7up christmas card list. These days landlords can ask someone to leave a property even though the rent is up to date on the pretence they need to refurbish it, intend to sell it or one of many other reasons.

In short best not to sound demanding or insisting on repairs but simply to make him aware of the problem.

As an afterthought is it possible to add a extra hinge in the centre ? Not that I would advise that course of action but sometimes these minor things can bug you so a extra hinge entails little cost or risk to yourself

Good point, it would be more risky if it were a ground floor window of course. I would be wary of trying to do stuff yourself in a rented property unless you’re competent at DIY (I am not, so I would no doubt make it worse) and you don’t want it to be put back on yourself by the landlord saying you did it without my knowledge and messed it up.

If they know or can find someone local who can do a repair, get an approximate cost. Clear it with the landlord before you agree (to cover yourself). If yes then get it done.
Message 10 of 14
(785 Views)
Reply
0 Thanks

I understand the window frames are wooden ?

Then it is a job for a carpenter, I had the same sort of hinges, and the carpenter made an easy job of it.

Did the whole house with new hinges in one day.

If I were going to do it.... I would attempt to remove ONE hinge and fix that... then replace it... then remove the other one, and replace that... of course... you could put "new" hinges in place, if you could locate them... One at a time... !  that way the window, would, hopefully still be in the frame, and not on the ground floor in bits .!.

gleneaglesreply, but I would suggest what has caused this problem is that the hinge has seized and adding some lubrication will help delay the inevitable snapping of the hinge.


As an afterthought is it possible to add a extra hinge in the centre ? Not that I would advise that course of action but sometimes these minor things can bug you so a extra hinge entails little cost or risk to yourself

You little beauty. That was the magic i was looking for.

Putting an extra hinge in the middle will allow me to remove the top and bottom one at a time for replacement - even if its only there temporarily.

Now to get clearance from elsewhere..