I’ve tried absolutely everything to stop latency spikes when playing. The MS Ping is around 30-40 during games, but I’ll then suddenly go up to 500+ meaning I lag horrendously and jitter and jump around. I’ve changed the channels, I’ve reset the router, I’ve changed the cables, the location to a better place. I honestly don’t see what else I can do. I’ve also tried a different DNS via Windows as this cannot be changed.

The speed is fine, we average around 40-50 Mbps. It also happens on Coldwar and other games.

Please can someone help me? I am playing over wireless, but this shouldn’t be an issue. I know there’s an issue because it even happens when no one else is in the house. It’s driving me crazy!!!!!


I’ve tried absolutely everything to stop latency spikes when playing.

Have you checked your "BufferBloat" score using the  DSLReports Speed Test  tool ?.

If you are not achieving an "A" rated "BufferBloat" result, then optimise your setup and repeat the test to eliminate your latency spikes.

If you are getting an "A" result, then the lag and latency spikes are probably elsewhere on the internet and are likely to be outside of your control.

Thank you for reaching out to me.  I undertook the test you told me to carry out.  Please take a look at the results.

What can I do to optimise these settings?  This sucks

Yes it does suck !

So my thoughts on your connection -

Try searching YouTube for tutorials for optimising your specific model of broadband router, and look for words like "bufferbloat" and "QoS" (Quality of Service).  It is unlikely that I can help you with this as I've not used a commercially made router for at least eight years now, as I built my own router hardware and run pfSense firmware for the router and firewall functionality.

On my own 72/18Mbps connection, I typically got DSLReports results worse than yours !.

With a lot of fiddling, testing, and tuning of my router's QoS settings, I now always get all "A" results.

To prove it I did a test just now, WHILE my kids are watching YouTube ! (which is why the graphs are a bit rough), and the test showed worst case latency spikes in the range of 3ms to 5ms.  However in order to achieve this, I do lose about 10Mbps on download and 2Mbps on upload speeds, but to have an almost zero lag connection is a joy ! 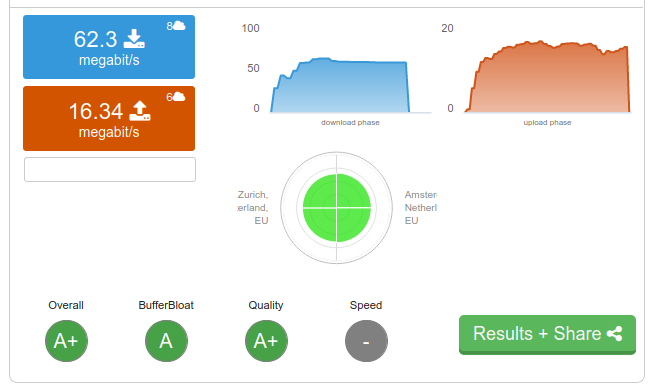 Wireless always introduces extra latency - try gaming wired and see it does improve things.
Playing Cold War wired for me is fine.
Customer / Moderator
If it helped click the thumb
If it fixed it click 'This fixed my problem'
Message 5 of 5
(1,787 Views)
Reply
0 Thanks
Topic Options