Around the 14th of this month, I've noticed that my download speeds have dropped to sub-36mbps speeds from previously hitting around 49-52mbps, this coincided with my line speed massively reducing in speed on that day for around 5 hours (10am to 3pm).  The line then synced back up to 55mbps, but then dropped to 49mbps as soon as the clock struck midnight.  It's since then held steady at 49mbps sync, with an attainable rate of around 56mbps according to the modem.

However, since the line dropped speeds to 37.57mbps in the period above, my download speeds on average have dropped to around 33mpbs and remained at that.  Nothing internal has changed in relation to my setup, equipment, etc, the only thing which has recently been carried out is that OpenReach are laying FTTP lines in our estate, but they've only been here since Tuesday.

Can my IP Profile please be checked to see if it has indeed been locked to a lower level since the big reduction on Sunday 14th please.  Also any idea what may have caused the issues on Sunday?

Interestingly when looking at my account details too, it's showing my current line speed as 8mbps less than the minimum guaranteed speed too. 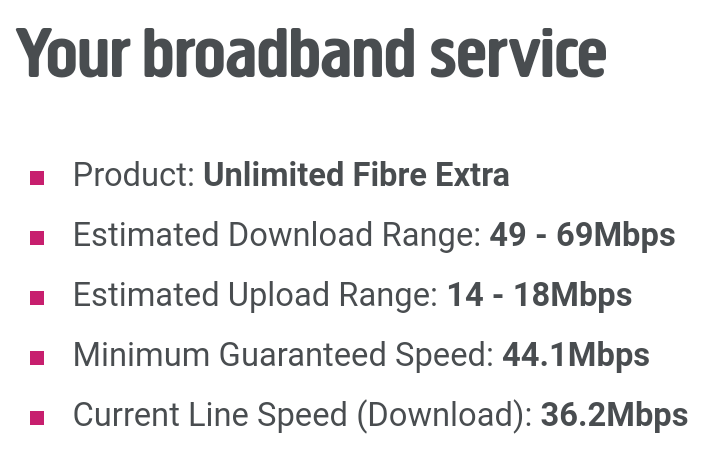 @ErTnEc  Looking at the modem/router stats I would come to the conclusion that the line is banded at 49Mbps, the near end (downstream) SNR margin is higher that the 6dB default confirming that the sync speed could be higher. The BT IP profile is correct at about 96% of the sync speed.

As for throughput speed if you have a Static WAN IP address the Current Line Speed will be restricting your speed, it should track the IP profile but may have got stuck after your line went down to 37.57mbps.

So you need to ask Plusnet to request a DLM reset to remove the banding and get the Current Line Speed manually updated.